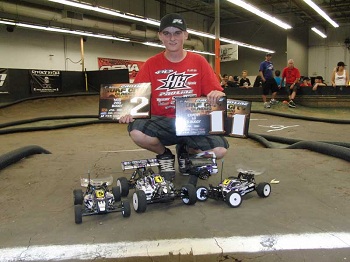 This past weekend, Aug 27-28 Ty attended the surf city classic race in southern California, he was entered in invite 2wd, invite 4wd and invite 1/8 electric buggy. Practice went very well for Ty, we established a good baseline setup for all three cars and felt confident going into qualifying on Saturday.

Overnight the track dried out so by Saturday morning the locals determined that slicks would be the best tire to run, though traction came up very quickly throwing a bit of a twist into things. First up for Ty was the 2wd invite class, even though Ty’s car wasn’t quite perfect he qualified a respectable 3rd in the first round, he tq’d the first round of invite 4wd and tq’d the first round of invite 1/8 electric. It was obvious though that our setups needed to be changed, the traction was much higher than it had been the day before during practice. every round we made setup changes to the car to keep him on pace. In 2wd we struggled with setup but Ty managed to qualify 5th overall, in 4wd Ty tq’d every round putting him on the pole for the main Sunday, 1/8 electric went the same way with Ty tq’ing every round and starting on the pole.

The mains didn’t start until 2pm on Sunday so we used the morning to make some final adjustments to the car, we were allowed to get on the track one more time with each car before the mains started and Ty felt very confident in all 3 classes.

4wd was the first class up for Ty, with Dustin Evans and Ryan Cavalieri right behind Ty we knew that it wouldn’t be easy. The start was very clean but on the first lap just before going over the triple Ty got up on 2 wheels and cased the triple, Dustin jumped over him to take the lead. For the next few laps Ty and Dustin battled and in the same spot on the track Dustin made the same mistake and Ty was able to jump over Dustin to take back the lead, at this point Ty turned it on and was able to put 12 seconds between him and second place and making it a definitive win in the 10 minute main.
Next up was 1/8 electric buggy, although the competition wasn’t as great he still had one of the best drivers in the world qualified right behind him, Ryan Cavalieri. This is one of the closest races most people could remember, in the first 7 minutes Ty and Ryan were no more than a second apart, they swapped positions twice in that time. At about the 7 minute mark Ty started to slowly pull away from Ryan, which caused Ryan to push harder and he made very tiny mistakes which allowed Ty to open the gap and eventually to take the win.

The 2wd main was the last main of the day, this would be a much harder fought battle. Dustin Evans tq’d this class with Cavalieri in 2nd, Hartson in 3rd, Truhe in 4th, Ty in 5th. Once again it was a very clean start, within the first lap Ty was able to get by Truhe and Hartson to take over 3rd place. Unfortunately shortly after Ty made a crucial mistake which put him all the way down to 9th. Being a 10 minute main and Ty not being one to give up, he pushed hard and got by every car on the track except for Dustin who was in first and managed to close the gap between himself and first place Evans to 4 seconds before the 10 minutes was up securing him a second place finish.

We would like to thank all of Ty’s sponsors for providing us with superior equipment, giving Ty the confidence to succeed.

Ty chose the following Pro-Line products to dominate the best drivers in the world:

Thanks,
Gord and Ty Tessmann