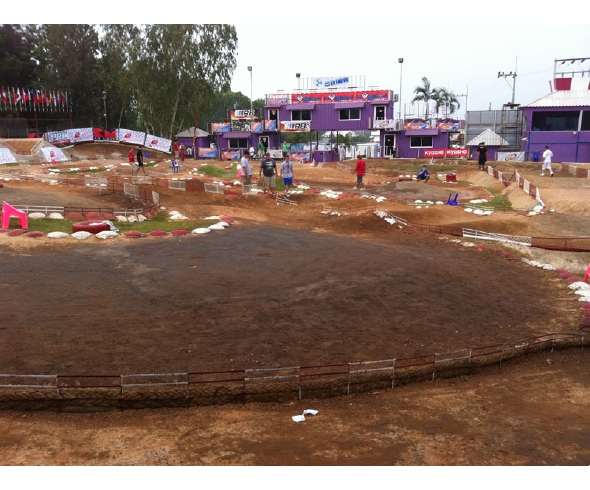 Today we were up early in order to see what might be in store for us at the track. Unlike yesterday, we found the track very similar to how we left it after practice with only small repairs.

The first round of qualifying showed that the Pro-Line team had speed with Renaud leading the team with the third fastest time of the round. Cavalieri and Tessmann had good speed only to be slowed by traffic or mistakes on the difficult track. Top 3 tires were M3 Hole Shots, Snipers and Revolvers.

Round 2 was run later in the day after a lunch break and everyone had an opportunity to walk the track. The track was becoming very clean, dry and grooved which indicated M2 tires may be considered. But there was still a third of the track including the tricky finger turns that had a slimy oil residue that seemed to still call for M3. So it was most of the team that mounted M3 Snipers, and Revolvers. As it turned out the clear sky cause track temps to rise more than had been anticipated and performance of the M3 tires was not ideal.

For rounds 3 and 4, the team has determined the ideal track temps that will signal the need to move to the firmer compound. All in all it was a good day with 5 drivers looking to go straight to semis.

After getting our traditional pickup cabby ride back and a clean shower, we were able to get a quick meal at Sizzler followed by Dairy Queen.

Oh and by the way, when cruising by the hobby shop, we spotted a T-Maxx with spinners being run in the street. Bling Bling.