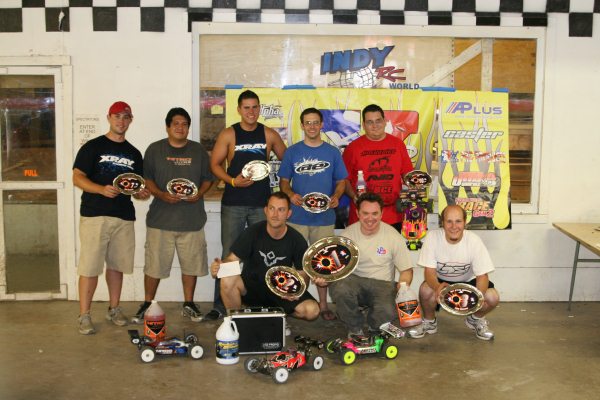 Round 2 of the RC Pro South Division was held at Indy RC World in Dallas, TX. Indy is an indoor facility with a semi small track layout, which always breeds close, tough racing. With super hot temperatures added to the 100% clay surface, it made for insane traction in which M2 Revolvers and M2 Recoils were the main ticket.

In qualifying, Pro-Line driver Kyle Skidmore looked like he was going to be the man to beat come main day by taking the overall TQ for both Pro Buggy and Pro Arena Truck. Kyle’s rides were equipped with M2 Revolvers, which seemed to be the most popular tread. In the Buggy main it was Pro-Line’s Mike Battaile who got off to a great start and with problems with both Kyle, and myself, Mike lead wire to wire to take the Pro Buggy win. Mike was running M2 Recoils, and even though the surface was super abrasive he had plenty of tread to spare.

In the Pro Arena truck main I got off to a great start and started to mount a pretty comfortable lead until disaster struck forcing me to leave the track. Skidmore also ran into problem dropping him back in the pack. I managed to get my truck back on the track, still broke, and managed to put on a charge to catch the leader by the last lap but it was not to be and I had to settle for 2nd. Kyle and I both ran M2 Revolvers on our trucks.