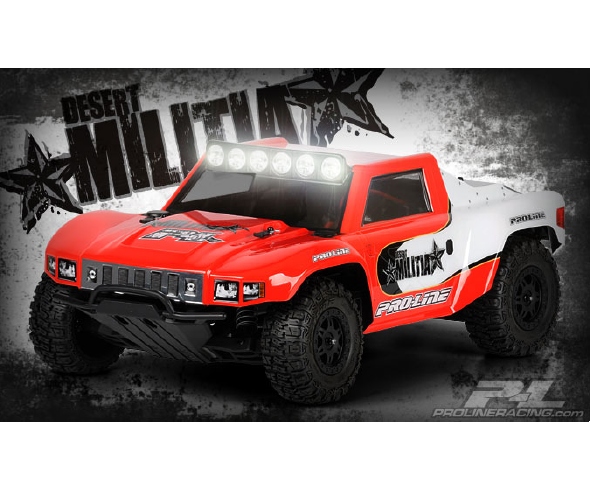 Just imagine that you have landed a sponsor in the high tech weapons industry. Money is no object! You have chosen to build the ultimate open class race vehicle resembling a military strike fighter. The vehicles cab is an off the shelf reconnaissance vehicle, you then hang race inspired composite fenders to clear the oversized race tires and massive suspension travel. The back of your vehicle has been enclosed with aluminum quick release panels to hide the spare tires, fuel cell and oil coolers. Large cooling fans are exposed to relieve the heat that the 900HP drive train produces but are protected by a sleek tubular cage. A final touch is the full width roof mounted light bar consisting of 6 high output HID lights that are perfect for targeting the next victim.

Under official license from Interco Tire Corporation, Pro-Line is proud to announce the 2.2″ TSL SX Super Swamper in the legendary G8 compound. With almost scale not being acceptable and access to Interco’s design data, Pro-Line’s engineering staff have been able to reproduce the Super Swamper in a scale configuration matched by none.

BullDog Clear Body for B4.1

It all started when Team drivers Ryan Cavalieri, Travis Amezcua and Ty Tessmann put their heads together with the Pro-Line development team with a mission to develop bodies with class leading performance in the 1:8th ranks. This aggressive goal was achieved with the BullDog body line. Providing performance that has, at times, been deemed an unfair advantage. BullDog bodies now set the standard in performance. After achieving such impressive results, Pro-Line is now bringing BullDog cab forward technology to the 1:10 class.