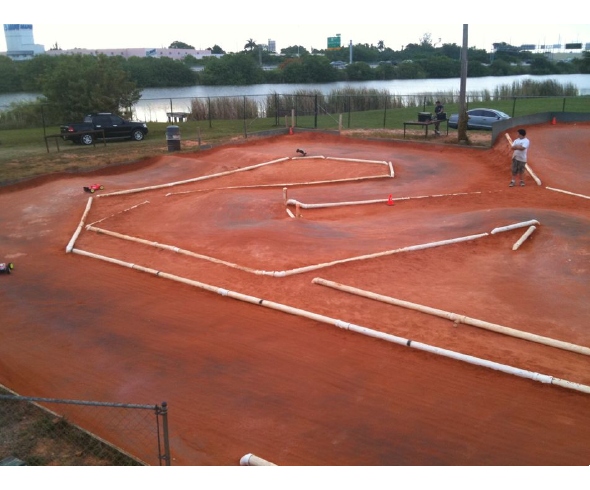 Pro-Line Continues Florida Domination! This past weekend saw the 7th installment of the Florida State Nitro Off-Road series held in Ft. Lauderdale, Florida at the Millspond R/C track. The weather was beautiful up until main day where sunny skies turned to rain threatening clouds. The track itself was pretty awesome. All the jumps were built right, it had tons of elevation change, and provided great opportunities for side by side racing. On the other hand, the surface was the most abrasive surface that we have raced on in the series this year. The track was glass smooth but as abrasive as 100 grit sand paper. Pair that with the 90 degree heat and you mow through tires as fast as you can drink a bottle of water.

In the always-competitive 1:8th buggy class qualifying was very tight, particularly with some of the names that showed up. We were graced with the presence of some of the best on-road drivers in the world including Chris Tosolini and Jared Scott. They both picked it up very fast and were forces to be reckoned with in quals, however once again it was all Billy Easton put his Pro-Line outfitted serpent car on top with a qualifying run that was 10 seconds clear of anyone else. Also the usual fast guys were in attendance as well including, Ryan Eckert, Myself (Leon McIntoshh J), Jp Tirronen, Nick Angelidas, Sean Kersten, and others.

On Sunday there were a lot of mind games going on. Rain was threatening so it was cloudy outside keeping temperatures a little cool but most importantly the sun off the track. This made a difficult choice on whether to run an M3 or an M2 compound tire for the main. In the end because of some light rain minutes before the 1:8th pro main everyone went out on softer compound tires. Billy Opted for the M3 Calibers, Tosolini tried every brand over the weekend but settled on M3 Revolvers with the Blue Closed Cell Foam for the main and I ran M3 Crime Fighters.

The start of the main went awesome! It was a Pro-Line 1,2,3 with Billy leading the way, Chris in 2nd and Myself in 3rd. We stretched out on the pack and stayed this way until the first round of pit stops. Shortly after which I had a tie up with traffic and the turn marshal flamed my car out so I was playing catch up the rest of the way. This opened the door for a battle between JP Tirronen, Jared Scott, and Ryan Eckert for the 3rd spot. At this point Billy was absolutely gone and Toso just didn’t make any mistakes. In the end though JP grabbed the 3rd spot closely followed by Jared. This finishing order went like this:

It was definitely one of the most exciting races we have run because it actually rained in the first 5 minutes of the main and then the sun came out and dried the track out rather quickly so we raced in a couple different conditions. It was interested to see how everyone’s cars changed as the track changed. Great event and the track crew did an awesome job. Look forward to going back again.