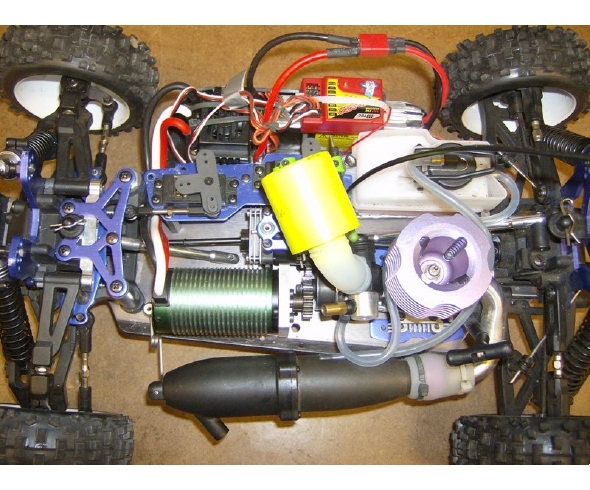 Earlier this year, Pro-Line was approached for a special project by a University of Kansas senior named Will Pro who is studying Mechanical Engineering.

The design project is entitled the KU “EcoHawks,” and it involved the designing, building, and testing of small-scale remote-controlled vehicles. His group designed a 1:8 scale parallel hybrid vehicle.

Pro-Line was commissioned to provide a few sets of tires, wheels and a body for static/kinetic friction coefficient comparisons, as well as drive train efficiency comparisons and wind tunnel comparisons.

Will said, “The car was tested with the electric motor only and it reached speeds near 40mph (2250kV motor w/ 11.1V batt.)! We were able to relocate the fuel tank in order to create space for the 1/8 scale electric motor. The motor mount was custom CNC machined by our team, and a differential was installed in between the two sources in order to average the speeds of each source.”

Q: Can the car run on just the electric motor or just the nitro engine with this new setup?

A: Yes. We attached one-way bearings to each output shaft of the differential, which allow us to achieve this. When one source is running, the resistance from the car tries to hold the input gear in place. When you hold a differential in place and spin one of the shafts, the other shaft tries to spin in the opposite direction. However, the one-way bearing prevents this from happening and subsequently propels the car forward. Without the one-way bearings, the car would not be able to move because the opposite shafts wouldn’t have anything to catch on.

Q: Why is the gear on the additional differential so big? Isn’t this going to seriously hurt your acceleration?

Q: How do you control the IC engine and the electric motor?

Q: So you added another gear to the entire assembly, wouldn’t this flip the direction of the car? The IC engine can’t be reversed, so how did you keep the car from always going backwards?

See the car in action at https://www.youtube.com/watch?v=N-S8BXsis9c