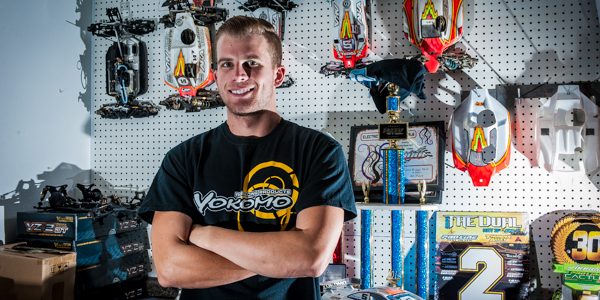 Carson Wernimont is a SoCal pro who burst onto the scene just a few years ago. Brought up on full-size racing, his approach is unusual for the RC industry. His true passion is nitro 1/8-scale buggy, and he went as far as third place at the 2014 IFMAR World Championships. Lately, his entire focus has been on electric, with Yokomo supporting his efforts.

RC Car Action: When did get in to RC?

Carson: I’ve always been in to RC, but I started racing when I was 12. My Dad always had cars around and I messed around with them in the yard.

You have a full-size automotive racing background with your family. Do you see a lot of crossover?

Yeah, my Dad has a ton of racing experience knowledge and race craft and a lot definitely transfers over from full-size; the mentality of racing and how to win. There’s also a lot of differences, but there are some similarities with shocks, pivots, and other parts, so a lot does trickle down.

What about the industries? I know you’re kind of learning that.

For some reason this is a pretty unique industry. In RC the goal is to sell a car that you race. That’s a little different from the full-size industry, and it is a little bit of a battle, but at the same time you have to work on developing stuff so you have the best car to sell. That’s no different than the full-size industry. That’s why Toyota has TRD, always developing for production. That’s why we race, to develop the best off-the-shelf car.

You had a lot of success in nitro, including podium’ing at the last 2014 Worlds in Italy, how did you feel about walking away from it?

I felt really good about it. That was a big goal for me going to the Worlds, to get on the podium and I did it. It was an awesome feeling and I got a lot of help from my sponsors throughout the week. They did all sorts of stuff for me. Lee Martin was a huge help and that’s about the time we started our relationship and we got to be really good friends. I mean a lot of people ask me why I walked away from it, since I’m good at it, but most people don’t realize unless they’ve gotten to race at the top in nitro and know what it takes to get there, it’s a lot of work. I was driving a couple of times a week and anyone who’s built or wrenched on a nitro car, they know if you drive for a day, you have about three days of work ahead of you to rebuild the thing. It got to a point where I needed to pick a street in life and decide where I wanted to go and it didn’t fit my schedule any more with work and wanting to get in to full-sized cars.

Do you think you’ll go back to nitro?

Eventually if the right opportunity arises. I mean anything is possible. At the moment with everything I have going on, I don’t see it happening anytime soon.

You’re doing a lot of electric now, what’s the biggest difference when you travel oversees and run carpet?

When you travel oversees, you have to be a lot more disciplined, especially with your corner speed. In the USA, a lot of ground can be made up by just launching it off of jumps and hanging it out loose and being a wild child, but in Europe you have to be a lot more disciplined and hit your lines in all the corners, no mistakes. That’s the one thing I’ve learned going over there. I also think driving a little bit of touring car lately has helped my carpet racing. I’m excited for my next race, whenever that is, and do some more on-road too.

What’s your favorite class to race?

1/8-scale nitro, but obviously that one’s out the window since I’m not doing that any more. With current cars I’m driving, 4WD buggy is definitely my favorite and the F1 of electric.

Hmmm, more so than 2WD buggy?

Yeah, definitely more than 2WD buggy. I think it just suits my driving style. I can drive a lot more aggressive. I drive pretty hard and punched and charging corners and using a lot of brakes. You can’t get that deep in to a corner with a 2WD car.

Actually, my favorite race, hands down is the Psycho Nitro Blast. It’s one of the races still around that’s like a real off-road race. You see all these races now with perfectly groomed, bowling alleys where everyone goes fast, but if you get to a really rough track, it separates the men from the boys. With a rough track, you have line choices and you have to know how to set up your car to go over the bumps. I mean it turns in to a survival of the fittest almost. That event is definitely the most awesome and the atmosphere is great and the track gets absolutely hammered. The corners can be driven inside or outside and dig in to the deep stuff- it’s like motocross. So many different lines, it’s good racing.

Advice for someone getting in to racing RC?

Practice a lot, work on your stuff a lot. You have to want it. You have to be “in to it.” I mean everyone is going to say that, but the one thing I’d say and I haven’t heard others say before, is definitely keep a notebook and take notes every time you drive the car. It’s something I never see at an RC track. It’s something I always do and something I hated when I first started out when I was a kid, but my Dad pounded it in to me, but now that I’ve gotten older and started to work on full-sized cars, I think it’s so important. You can chaise your tail all day long. Write down the temperature, write down what the track was like, what tires were used, what the grip was like. Keep track of what you did to your car, the changes you made and how it affected things. If you get to that track three years from now, you can look at what you did and understand maybe your car sucked because of this, or it was good because of that. You’ll have a bunch of notes telling you to go in a certain direction. It can help you to keep from chasing your tail all week. 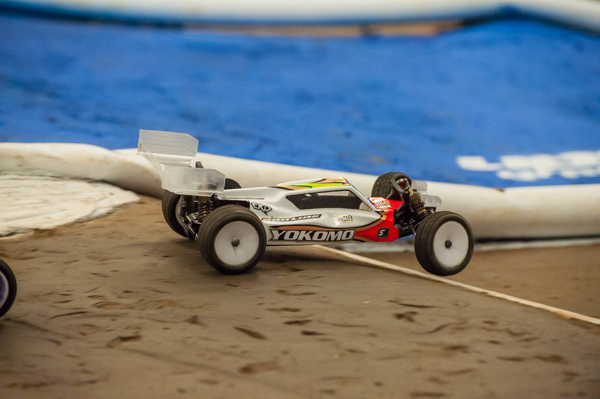 Carson on the move in the Invitational Class at the 2016 Reedy Race of Champions.