There were only nine days left until Axialfest Badlands. I had just enough time for a last-minute build and assembly. The theme was easy enough to figure out thanks to JConcepts’ newly released body called the Power Master. It’s basically a one-piece Power Wagon body with bed attached. I decided to paint it my way, rat rod style. Of course, I called the truck the Rat Wagon.

Axialfest Badlands was right around the corner when I decided that the perfect chassis to base the Rat Wagon on was the latest and greatest SCX10 III Basecamp. The platform is made for enthusiasts like myself, builders that won’t keep it stock and install all kinds of new goodies into it. The Basecamp chassis has a 12.3-inch wheelbase that makes it easy for body setup. It also has portal axles for better crawling performance. 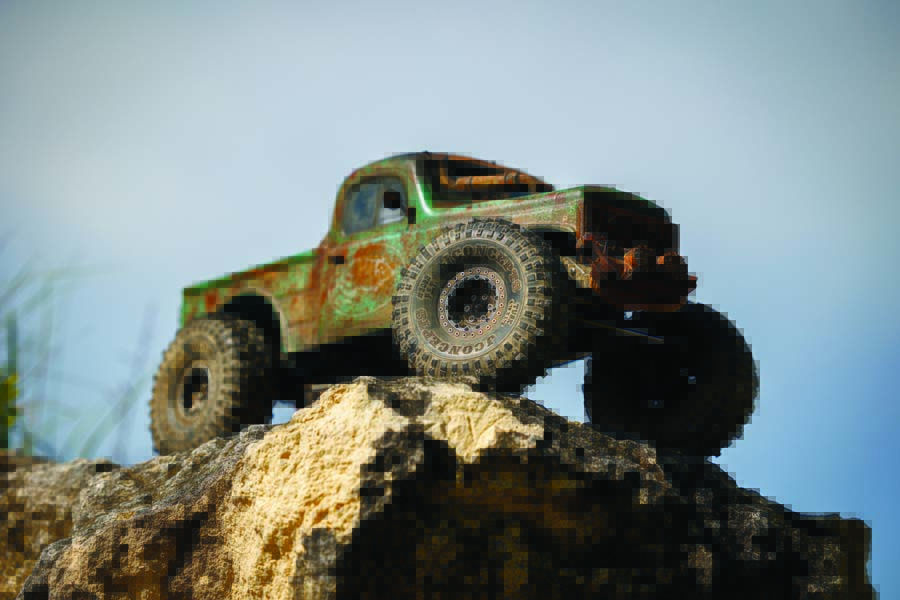 The Basecamp’s stock LCXV transmission is great, but it doesn’t allow me the room to use my custom interior. So I reached out to a great friend in Canada, Chris Robinson with GCM Racing, for a solution. GCM is well-known for their scale transmissions, custom chassis and unbelievable scaled-out builds. Chris told me that he had just developed a scale transmission conversion kit that was designed specifically for the Basecamp. The timing was perfect. To make it in time, I had to have Chris overnight the new kit from Canada. Thank you Chris!
Next was power. Luckily, I had a few of the new Castle Creations Mamba Micro X2 ESC with Castle Slate 1900kV Crawler Edition system combos on hand. I went with this system based on my own experience with them. I’ve been using this setup in my builds running 4S power and it hasn’t let me down. The Basecamp is not a heavy rig, so it doesn’t need an obscene amount of power, and it’s limited on space, so the compact Castle Creations crawler system was the perfect choice. Another big reason I chose the Mamba Micro X2 was that it allowed me to run the latest and greatest in servos. The Reefs Triple 8 steering servo allows me to run a direct power of 4S. Amazing! The Triple 8 provides a little over 900 ounces of torque, which is more than enough. 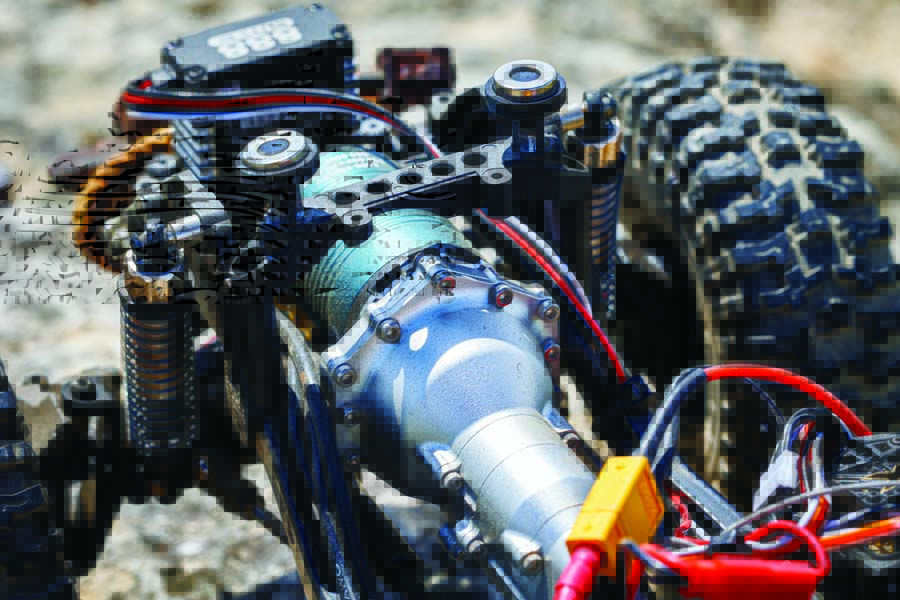 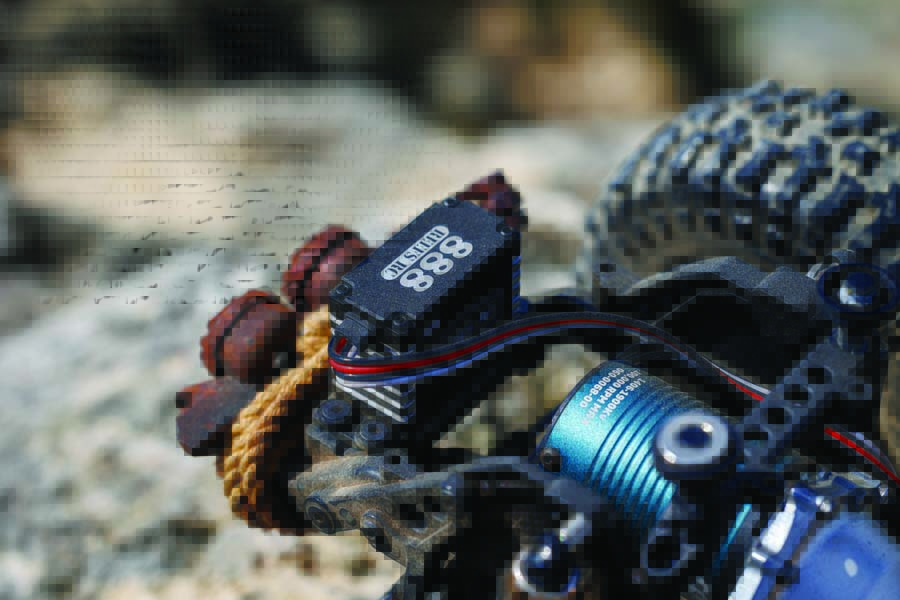 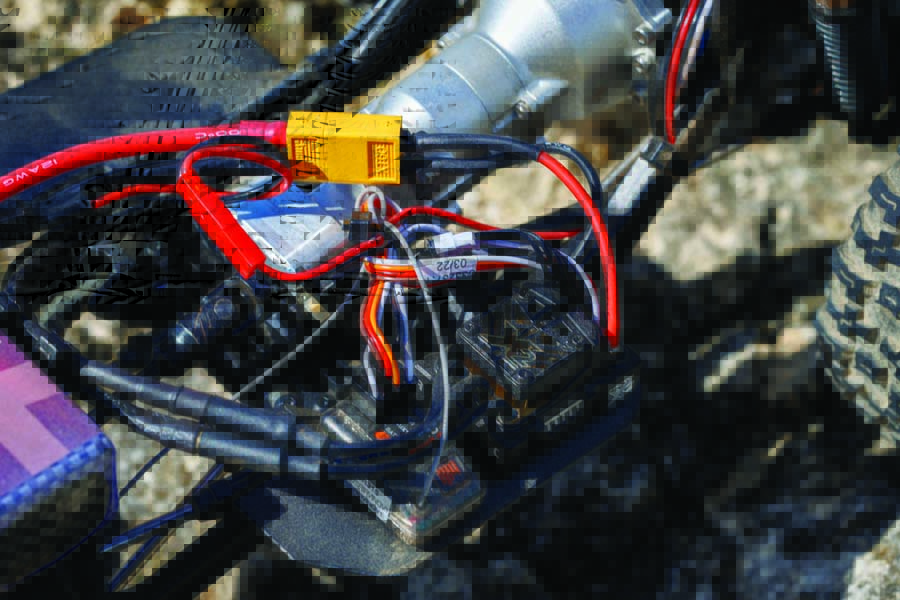 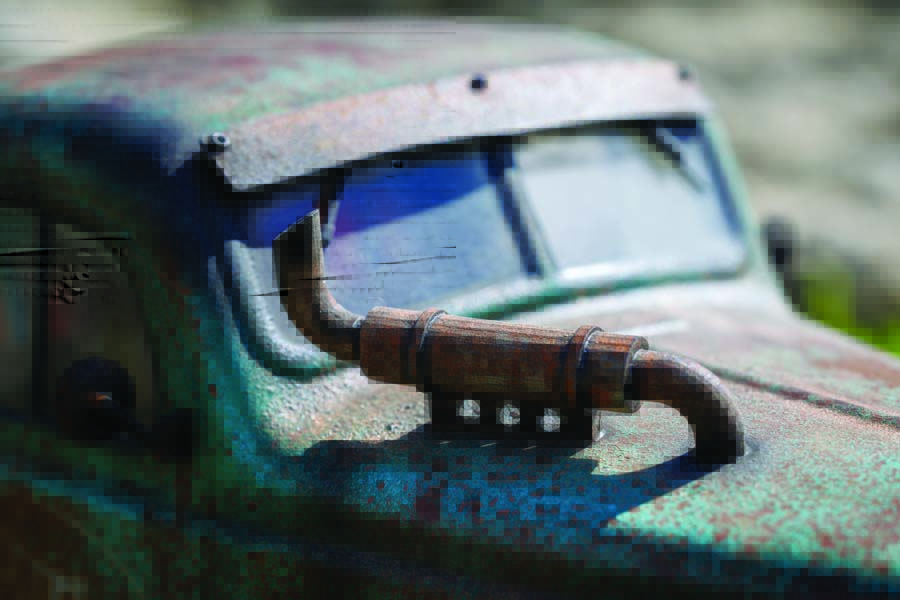 Look closely… there are plenty of scale details to be found on this custom build. 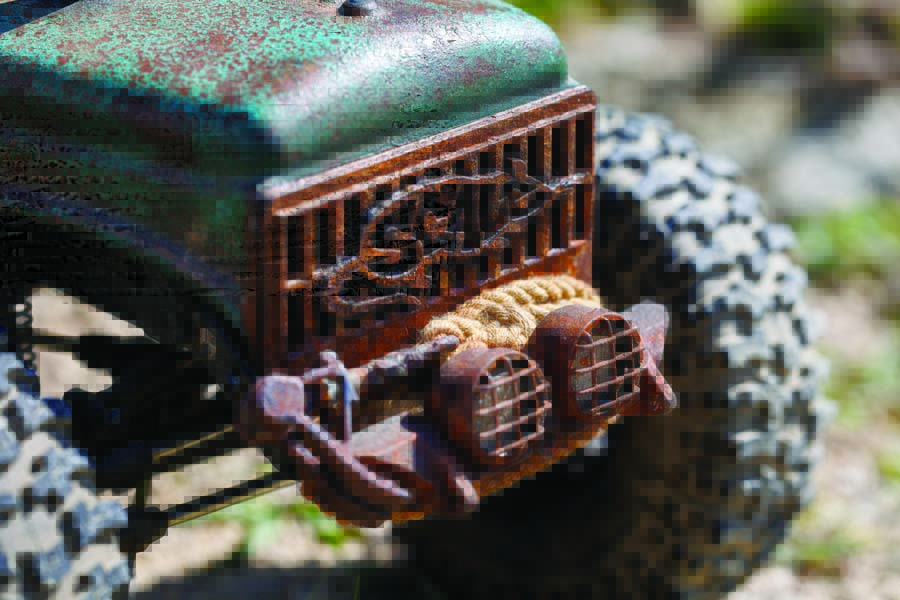 As mentioned earlier, I chose the JConcepts Power Master body for the rat rod-inspired build. Before I started with the paint, I wanted to gather a collection of 3D-printed parts to add a more detailed look to the truck. JConcepts provides Knights Customs specifically designed side mirrors, wipers and door handles for the body. The grille, visor, hood exhaust, dash with seat, scale rats, license plate, rear tailgate shackle mounts, and bumpers front and rear were made in-house using resin 3D printing. We are talking about a solid 48 hours of 3D printing in total to produce those parts. Thank goodness I have multiple printers.

I used real slivers of cut wood that I burned and stained for the truck bed floor. The treated wood planks were laid down on another sheet of wood with permanent adhesive and installed into the body’s bed enclosure. The wood bed influenced the colors I chose for the body. The bed had a rich dark-brown tone from the stain, so I felt that I needed a bright, vibrant base for the body itself. I ended up going with a color I call Scale Rat Banner Teal, aka Tamiya Color Coral Blue. To add a vintage worn-in look to the truck, I chose five natural shades of brown paints to use as weathering layers.

The most common technique to get the weathering effects I was looking for is to use coarse salt. I sit and grind my own salts for hours. This will allow me to get different sizes of grain for different applications. The salt grinding process allows you more control of where your different layers will come through. The body in total took six days to finish; it was completed literally 20 minutes before I hit the road to drive to the event in Indiana. Timing was so tight that my signature scale rats, which were 3D -printed through the night and painted as soon as I woke up, were barely dry when I left for Axialfest. 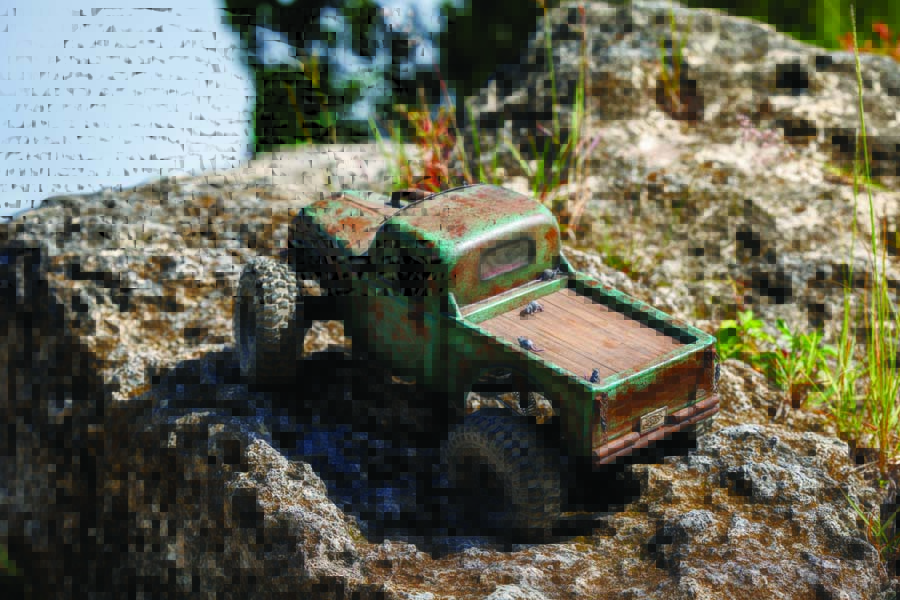 “The SCX10 III Basecamp is made for enthusiasts, builders who won’t keep it stock…” 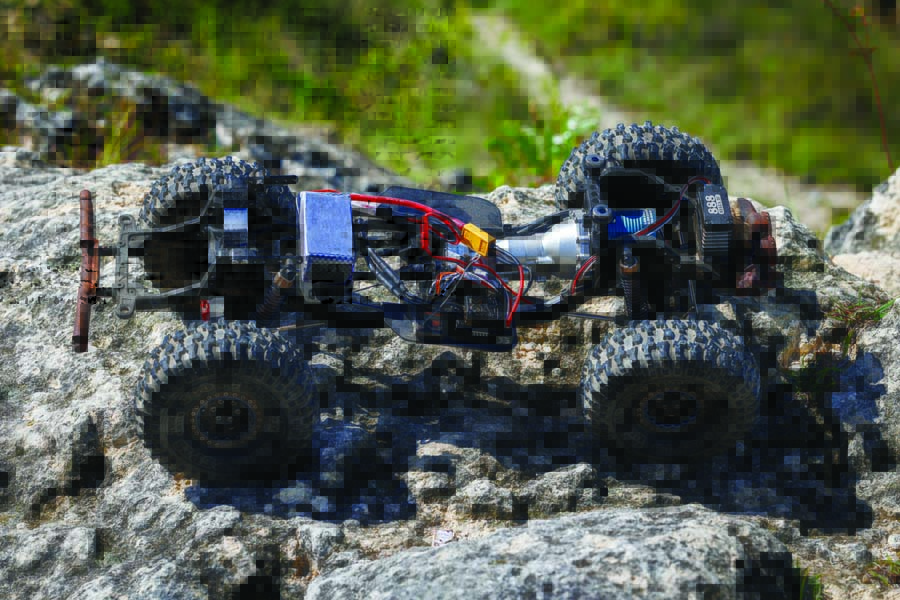 It’s not all about good looks—this rig is set up for some capable crawling, too. 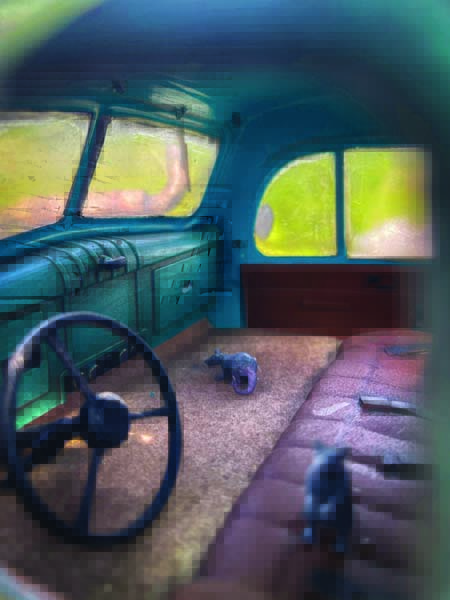 There are plenty of details that can be found inside the cab as well.

As for Rat Wagon’s shoes—I mean tires—I picked up a set of JConcepts’ latest tires, ones that I’ve been using in competitions called the Tusks, in 4.75-inch outer diameter sizing. These tires are made with a flexible green compound that also has a great tread pattern that bites onto anything they roll into. The stock foams are medium open cell inserts that are great for all-terrain driving. The aggressive look of the tire also adds to the theme of the Power Rat. In case you’re zwondering how I was able to snag these tires so early, I’m a team driver for JConcepts and they are local to me so it was easy for me to get my hands on them.

The wheels are the latest from Vanquish Products. These Vanquish 1.9 KMC KM236 Tank beadlock wheels feature new Vanquish IFR beadlock rings. I had Rusty Amptmeyer from Rusty Kustoms do a custom distressed Cerakote paint job on the wheels, and I was able to choose any color combination I wanted. I went with bronze distressed for the outer beadlock ring and wheel face and had the IFR inner ring finished in distressed gray. The colors blend very well and give the wheels more visual depth. Big shout-out to Rusty, because I also needed these ASAP and he really came through for me. 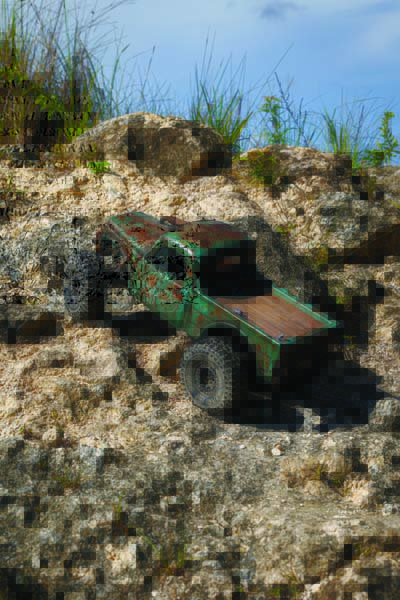 Learn more about Joshua Dutton of EverydayRC in the article, No Days Off, in this issue. Check out more of his builds by visiting his YouTube channel at rceveryday.com. 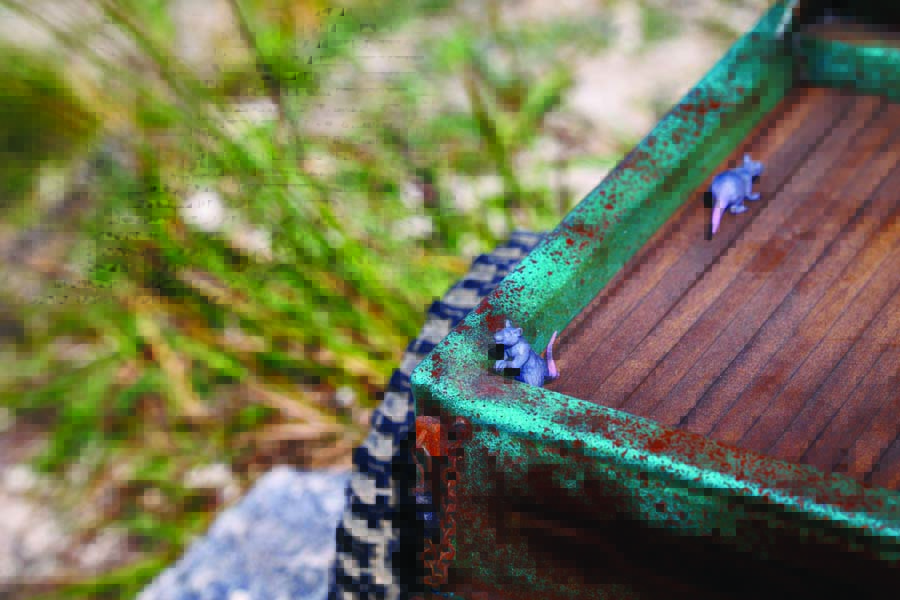 This is what a pristine collection of custom-made RC rat rods looks like. 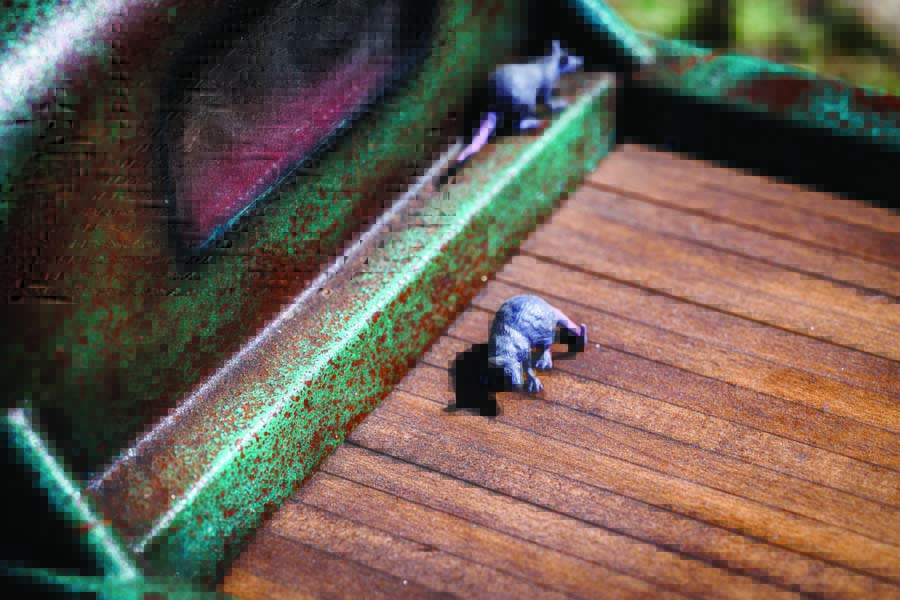 Scale Rat’s signature 3D-printed rodents are hidden throughout this truck. 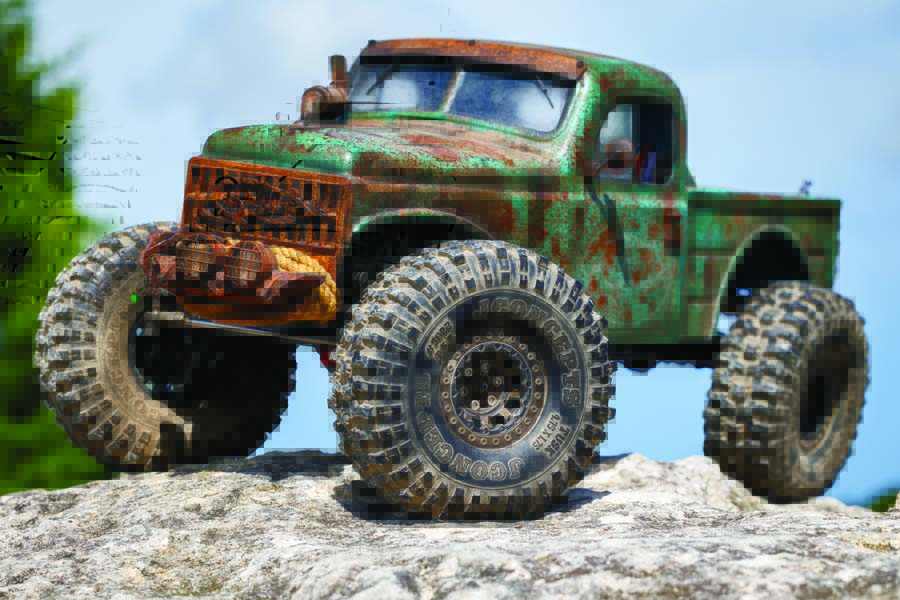 One look and you know that the Rat Wagon means business.

Perhaps nine days to get a build done was stretching it a tad. I eventually completed Rat Wagon at Axialfest Badlands, where I installed the truck’s Spektrum SR315 receiver to communicate with the Spektrum DX5R Pro controller. The DX5R is the transmitter I use for all my rigs. I didn’t need any extra auxiliary positions; I was keeping it as simple as possible. With the rig complete and operating as it should, I hit the Badlands trails.

To see more custom creations by Robert Pezza, aka Scale Rat, followed him on Facebook and Instagram with the handle
@ScaleRat20.