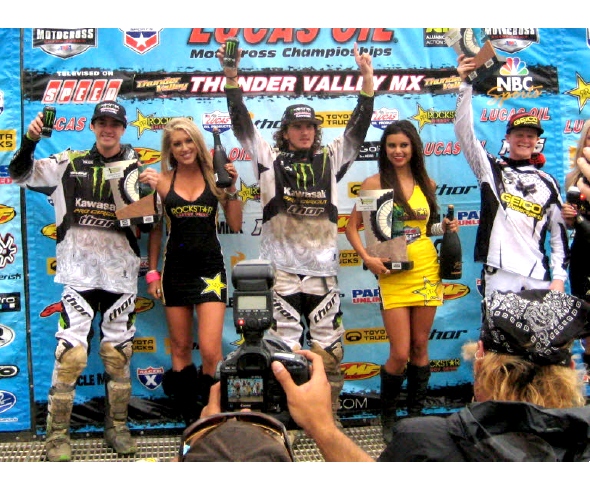 Lakewood, CO: Thunder Valley Motocross hosted the fifth stop on the 2010 AMA Motocross series, and once again the Traxxas-sponsored members of the Pro Circuit/Kawasaki team were in top form—and on top of the podium. As he has in all but one of the previous rounds, Pourcel won the first Moto of the day. Teammate (and Round 4 overall winner) Dean Wilson stayed on Pourcel’s fender to keep the pressure on, but settled for second place. Tyla Rattray just missed the podium with fourth place, while 250 West Supercross champion Jake Weimer’s bad luck in the outdoor season continued with crash that sent him to the back of the field. Weimer battled back to finish tenth.

Trey Canard took the holeshot in Moto 2, but the entire Pro Circuit/Kawasaki/Traxxas team was in the lead group as the first lap got underway. Dean Wilson held third, with Tyla Rattray, Christophe Pourcel, and Jake Weimer close behind. Four minutes into the race, Weimer encountered more hard luck with a crash and trouble restarting his bike, leaving it up to his teammates to lead the charge to the podium. Dean Wilson picked off second-place rider Blake Wharton at the nine minute mark, and Christophe Pourcel did the same a minute later to bump the Wharton to fourth as Wilson and Pourcel rode on in second and third in the chase for race leader Trey Canard. Canard found his groove on the treacherous Lakeview track and built up a four-second cushion that appeared insurmountable, but Christophe Pourcel would not settle for second place. Eleven minutes in, Pourcel passed teammate Wilson to move into second, then began to steadily, relentlessy erode Canard’s lead. Riding with characteristic fluidity despite the blown-out track, Pourcel closed the gap on Canard with less than ten minutes to go. Canard kep his cool as Pourcel tried a few different lines in the search for a clean pass, until Pourcel finally got around Canard with a beautifully timed outside-inside line. Now out in the clean Colorado air, Pourcel was able to open a 2-second gap as he left Canard to deal with Dean Wilson in the battle for second, while Tyla Rattray stayed on Wilson’s fender in fourth. As the last of the Moto’s 30 minutes drained off the clock and the plus-two laps unrolled, Pourcel held his two-second lead to take the Moto 2 win and the overall victory, with Trey Canard in tow and Pro Circuit/Kawasaki/Traxxas teammate Dean Wilson in third, both for the Moto and for the overall.