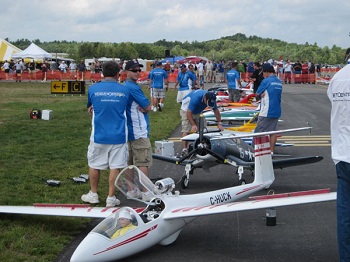 For four beautiful days in September, Sanford Seacoast Regional Airport was the epicenter of RC excitement as it played host to the Horizon U.S. Airmeet. Airmeet was started four years ago by Horizon Hobby Germany as a unique way to give the general public an up-close look at the world of radio control hobbies. The annual event quickly grew into one of Europe’s premier RC attractions. This is the first year the Airmeet has come to U.S. shores, and if the enthusiastic response it received from the public is any indication, it likely won’t be the last.

Admission was free and over 20,000 spectators, including 600 students from Sanford area schools, showed up to experience the four-day extravaganza. As with its European counterpart, the U.S. Airmeet included air show demonstrations by many of the world’s best RC and full-scale pilots, including former U.S. Aerobatic Team member, Matt Chapman. In between aerial displays, spectators could take the controls of an RC buggy or airplane at one of the ‘try me’ stations or sample tasty fare from some of Maine’s finest food and beverage vendors. Other attractions included model rocket launches, nighttime fireworks displays and a massive off-road race track where visitors could watch professional RC drivers go head-to-head.

In addition to the thousands in attendance, media outlets all along the New England coast brought coverage of the event to thousands more. Joe Schamuhn, Vice President of Strategic Marketing for Horizon, was pleased with the turnout and the positive public response. “The first US Airmeet was a great success for everybody involved – Horizon, the pilots, the drivers and of course our partner, Ray and Robin’s Hobby Shop. We proved that fun, interactive RC events like this can draw just as big a crowd in the U.S. as they do in Europe. Most importantly thousands who have never had any exposure to RC hobbies now know just how fun they can be.”

If you like this article, check out this additional article on Horizon Hobby.