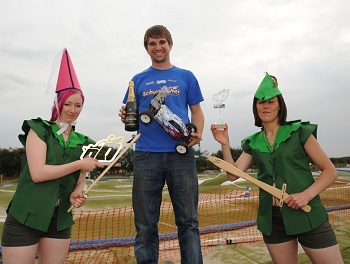 This weekend Robin Hood Raceway hosted the 2nd running of the oOple Invitational, an event put on by Jimmy from oOple, a fun event for racers of all ability from all over Europe. With the event taking place just a week after the World Championships there were a few big names missing, but this meant that more people could enjoy a large event with many European racers. The racing was still close at the top, with several of the UK’s top drivers attending and Hupo Hönigl making an appearance from Austria.

In 2wd there were 3 Cougar SV’s in the 12 car A Final, with Irish Schumacher racer Derek Mcloskey, just missing out, at 1st in the B. The team had shown good pace in Qualifying with Danny McGee lining up third on the grid and Tom Cockerill taking the quickest time in the 5th round of qualifying.

The finals were quite a messy affair in the mid pack, with many drivers making uncharacteristic errors on the unusually slippery track. It’s fair to say that the team didn’t have much luck in the finals with the drivers being caught by crashing cars or punished by small errors. The car showed some promising pace, producing some of the quickest laps of the finals, but it just wasn’t to be.

In 4wd the team performed much better, with Tom Cockerill taking TQ by virtue of 3 round wins, and Danny McGee 3rd, who took the quickest time in round 2. The CAT SX3 was looking smooth, consistent and quick throughout qualifying and the team were looking forward to the finals.

In leg 1 there were mistakes behind Tom in the early laps and he soon had a 3 second lead. This lead was never threatened and with some of the quickest laps of the race he took the first leg by over 10 seconds, being the only driver to make the extra lap.

Leg 2 was very different, with the top 3 breaking away from the pack and having some close racing on track. Tom kept cool under pressure and eventually the mistake came from the second place man. This gave Tom the space he needed to cruise to another leg win and the overall meeting victory. Danny McGee completed a Schumacher 1-2 for the leg with clean, quick, consistent laps throughout.

Overall the meeting was a great success, with all drivers having a great time. All heats and finals were 6 minutes long which was a nice addition and gave everyone plenty of track time. The off track entertainment was second to none, with a DJ & Band on Saturday night and brilliant catering who provided a Hog Roast! A massive thanks to Jimmy & Vicky at oOple, all the helpers from RHR/YORCC and anyone who helped to put the event on. 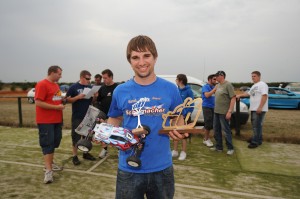