Saturday night I made my way over to Blairsburg, IA to check out round #5 of the Mid-America Modified Tour (MAMT). This new points series has 8 tour stops at 2 participating tracks, Thunder Hill Raceway in Lincoln, NE and Deadend Raceway in Blairsburg, IA. All drivers are competing for the HPI 1/5 Dirt Modifieds Championship. To qualify you must compete in at least 6 tour stops and your 2 lowest scores are not counted. This was their biggest turnout of the series thus far with drivers from Iowa, Nebraska, Missouri, and South Dakota all in attendance. 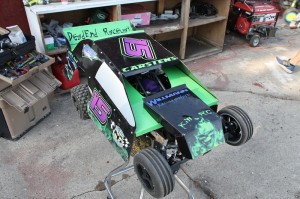 Since this is the 1st year of this event the race organizers decided to keep the rules very simple. The only class offered this year is a modified class and each car has to be a HPI 1/5 Baja vehicle with a EDM or IMCA style lexan body (no metal). So this meant a driver could pick up a HPI Baja 5B, 5T, 5SC and with a few changes and an approved body they were up and running. 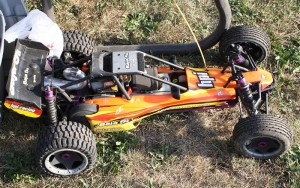 So for example a car would start out as a HPI Baja 5B like the one shown above. 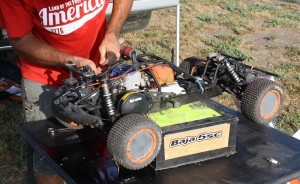 And after a racer added a few body mounts and an approved body they were ready to hit the track. 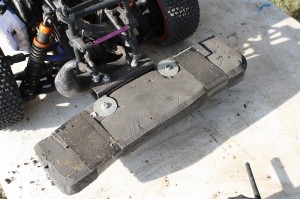 Some drivers did add nerf bars, front, and rear bumpers but they weren’t required. 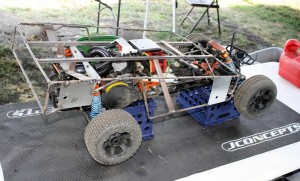 And some even built a roll cage to help protect their investment even more. But again since this is a modified class the driver could decide how much they want to invest into their car. 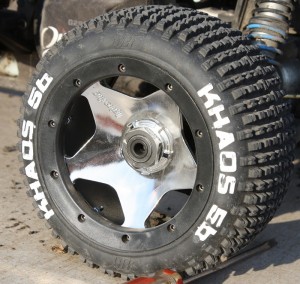 Many of the points leaders were using stock engines, but a lot of racers did swap out their tires for Hot Bodies or Hostile Racing treads. 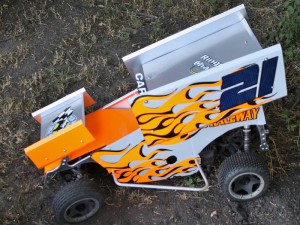 I did see a few sprint cars that night but they weren’t part of the official race program. The race directors told me that that might expand this series to include this class next year but for now these cars could only run during the open track time before the A Main. Stock Baja 5B owners took this opportunity to turn take a few laps too.

The race format for that night was 2 rounds of qualifying and then all the mains. Each qualifier would consist of 20 laps, and due the increased turnout they ran an A, B, and C main that night. The C main consisted of 15 laps and the B main ran for 20 laps. The top 4 in each lower main would advance and the A main would run for 35 laps. After a brief drivers meeting and the playing of the national anthem the cars roared to life and the event began. 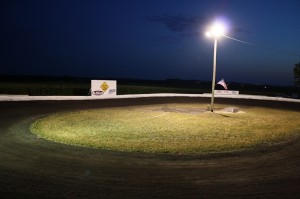 Due the extreme heat we have been seeing this summer in the Midwest (I think it is 100 degrees outside as I write this) this event was moved till 7pm. It worked out well since they only had to water the track a few times and once the sun went down the track did a great job holding in moisture. The track itself is 410′ with a 86′ driveline into turns 1 and 2 and a 80′ driveline into turns 3 and 4, but once you put 5 or 6 1/5 cars out on the track at the same time the track becomes small very quickly. 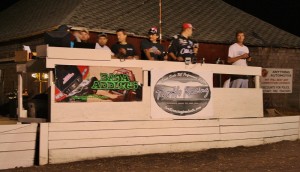 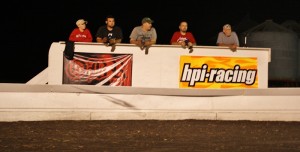 Another unique feature of this track is that it has 3 drivers stands. The track owner said he did this since some races prefer to stand at different points on the track to help them see going into a turn. This added another layer to each racer’s strategy going into to this event too. 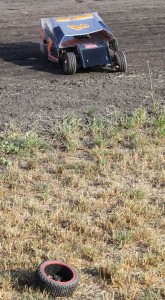 There were some intense battles in qualifying as drivers battled for the best lines on the track. Anytime there was a wreck or a mechanical failure the caution lights would come on and the cars were stopped for the safety of the marshals. Any cars that were involved in the caution would be placed into the back of the pack. Then all the cars would line up in order based on how they were doing in the race and then they would proceed around the track until the race directory felt they were lined up correctly and then the drivers would get the green flag. 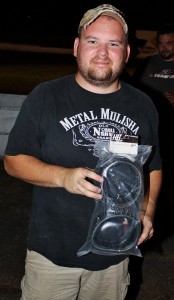 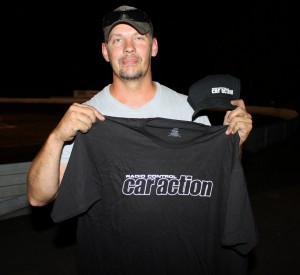 After a few qualifiers the race program was stopped so the door prizes could be handed out. Thanks to the event’s many great sponsors some drivers walked away with some nice swag for their Baja or their own back.

Also between qualifier rounds I was able to check out the latest gear in the pits. On display I saw this new Woodster 5SC body. This body is made of black lexan and comes with window and light decals. It is also available in clear lexan so you can spray your own paint scheme. And this body is highly durable when compared to a stock HPI body. The stock body is made from .030 polycarbonate while this body is made with genuine .093 Lexan. 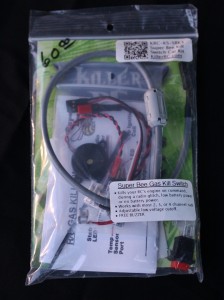 Also spotted was this Super Bee Kill Switch kit from Killer RC that we first told you about back in April. This device will kill your engine on command, during a radio glitch, low battery, or even a total loss of battery power. This works with all radios out on the market today and even has an adjustable low battery voltage cutoff.

We rolled into the mains that night and some of the best driving was shown in the A Main. After some close battles and a few caution laps South Dakota’s Nick Beaver took the feature win. Next stop on the tour is slated for August 18th at Thunder Hill Raceway in Lincoln, NE. For more info about this exciting series please visit MidwestLargeScale.com. 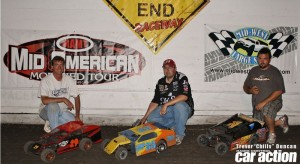 If you like this article, check out this additional article on HPI.