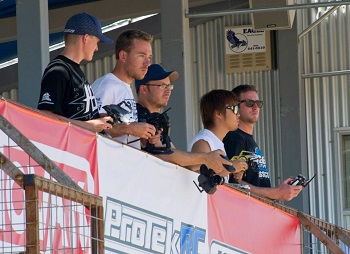 Qualifying has completed for the World’s warm-up race now.  Drivers have switched to mid motor setups due to the increased traction, and some familiar names are at the top.  To see who the top qualifiers are, take a look at the race report below by A Main’s Jason Sams:

In 2WD Team Associated’s Ryan Cavalieri looked fantastic driving his mid-motor converted B4.2. Initially, Cavalieri and a number of Team Asssociated drivers were running rear-motor cars, but as traction came up they all switched. Cav was now much faster and super consistent! Many industry insiders thought the A-team would be at a disadvantage because “they don’t have a mid-motor conversion,” but this was not the case. The CML conversion Cavalieri, Maifiled, Cragg and Hartson all used looked like it had the best line around the track. Hartson, who ended up running Team Associated Team Manager Brent Thielke’s car TQ’d round three after switching to mid-motor for the first time. Hot Bodies’ Ty Tessmann who is running a Kyosho RB6 is sitting second on the grid. Associated’s Neil Cragg, a former 2WD World Champion will start third for the 2WD triple A-mains.

In 4WD Team Associated was again the dominant chassis, with five out of 10 drivers running an Associated car. Although TQ Ty Tessmann runs for Hot Bodies, he has been using a Team Associated B44.1 throughout the Pre-Worlds race. Hot Bodies is not ready to show the world their new 4WD buggy, so Tessmann chose to run the AE car. Tessmann was certainly the most consistent driver in 4WD with a TQ round and two rounds finishing just behind the top qualifier. Tessmann would have had two “zeros” had his motor not overheated in the first-round just a couple of laps before finishing. Ryan Maifield will sit second for the start of the mains and his Team Associated teammate Ryan Cavalieri sits third. Both drivers were fast throughout qualifying, although Maifield struggled in the first couple qualifiers. He strapped it up by the third and fourth rounds and took the top spot setting the fastest time of the entire weekend in round four. Tamiya/ A Main Hobbies’ driver Lee Martin had solid finishes in all of his qualifiers to put himself fourth overall