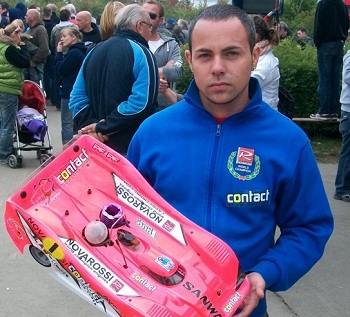 A very good week at the Euro 1/8th A in Luxembourg for Contact Tyres. During the practice Dario Balestri chose Contact Tyres and was so happy with the performance added himself to the Contact Team with World Champion Robert Pietsch, World finalist Simon Kurzbuch, Dutch driver John Ermen and Belgian driver Jerome Renaux.

After the intense qualifying Contact drivers were on top with Dario Balestri TQ, Robert Pietsch second and Simon Kurzbuch 5th. With new Efra rules, all drivers have to drive the semi finals and again Dario won Semifinal A and Robert Semifinal B.

The finals started with 3 Contact drivers and after a very close fight Balestri had a mechanical problem after 30 minutes when running in first and Robert a few minutes later had problems with his engine when he was second.

So in the end Robert finished 7th, Dario 9th and Simon 10th stopped by his front steering servo. Not a lucky race in the final but Contact Tyres showed very strongly, being the fastest tyres in Qualifying.

The drivers are hoping for better luck next time!