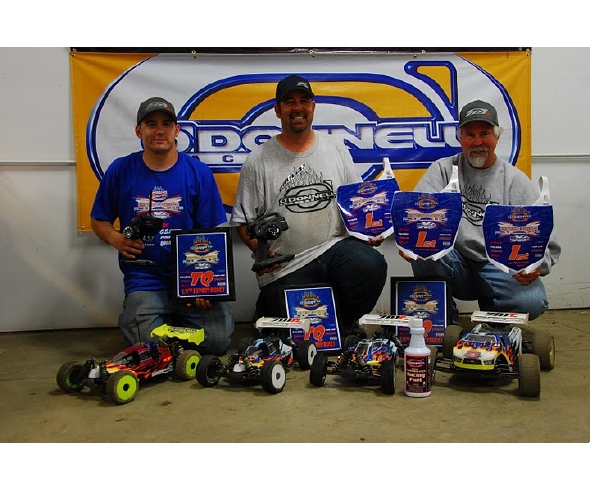 If you want to talk about a busy schedule, let’s talk about the O’Donnell crew’s coast -to-coast adventure! The journey began at the incredible RC Excitement facility in Fitchburg, MA, for the first annual O’Donnell East Coast Championship. The RC Excitement crew did a fantastic job preparing the track for an awesome weekend of racing.

During qualifying, East Coast factory O’Donnell team driver Mike Wilder showed that having the home track advantage does pay off. He piloted his brand new Z01-B SG buggy to the TQ position over West Coast superstar and factory O’Donnell driver Barry Baker. Not to be outdone, Baker went on to take the TQ spot in e-buggy with the Z01-E SG — and the TQ spot in truggy as well, with his Z01-T SG.

In the main events, however, the Fabulous Barry Baker put on a driving clinic with the new line of SG vehicles from O’Donnell racing. Baker has been smoking the competition by powering his nitro vehicles with the O’Donnell SS .21 / O’Donnell R2 pipe combination. It has proven to be the ultimate package of power, smoothness and economy.

The following day, it was back on a plane to the West Coast for the annual O’Donnell West Coast Championships at the world-famous Revelation Raceway in Montclair, CA. Once again the Rev crew had built a challenging track for the racers. During qualifying, O’Donnell Fuel driver Dylan Rodriguez used his 30% Racing blend from O’Donnell to lay down the TQ in both buggy and truggy.

When the main events rolled around, it was a whole different story. The top spot changed hands throughout the race. In the end, O’Donnell factory driver Barry Baker, fresh off of his truggy win out East, let them know who the boss was as he piloted his O’Donnell Z01-T SG to victory over his O’Donnell teammate Mike Moralez. Both drivers were running the O’Donnell SS .21 / O’Donnell R2 pipe combination.

All in all, it was a crazy couple of weeks for the O’Donnell crew. But once again, they proved that the only way to the winner’s circle is by using the full line of O’Donnell Racing products!