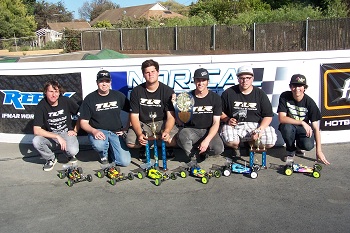 TLR’s Dustin Evans, Frank Root, Matt Castellano, Matt Schreffler, and Cody Turner made the trek up to Nor-Cal Hobbies for the 3rd Annual Norcal Off-Road Championships this past weekend. The track layout was fast and fun with really high grip levels setting up for an awesome weekend of racing. Co-0wner and track builder Kevin Jelich again had an amazing layout installed, and has emerged as a premier track builder in the US racing scene. TLR took home several TQs, and A-Main wins.

Pro2 – Cody Turner was on point in qualifying. Cody would TQ each of the first 3 rounds, to set the fastest time going into the last chance qualifier. Frank Root would briefly challenge Cody’s TQ, but was unable to capture it. The mains were all Frank Root’s though. Starting 5th on the grid, Frank fell back in A1 to 10th, but charged hard throughout the 8 minute main, and worked back into 4th with 2 minutes to go. With all 4 trucks on the same straight, the battle begun, and Frank was able to get the lead and hold on during the final moments. A2 saw Cody lead from Pole, and Frank making moves the first couple laps to get into 2nd behind Cody. Cody and Frank had a brief battle, but a bobble from Cody gave Frank the lead for good. Frank would cruise home to the A2 win, the overall win in Pro2, and claim his 3rd title belt.

Pro4 – Bobby Gately came to the ‘Champs to run 4wd SC for the first time, but made sure to put people on notice. Bobby would go onto take an easy TQ and cruise to wins in A1 and A2 with his Losi Ten-SCTE.

2wd Mod – Dustin Evans was on a mission in qualifying. Dustin used his 22 buggy to set the fastest time in every round and take the overall TQ, leading the top 7 qualifiers all with TLR 22’s! When the tone went off for A1, Dustin quickly jumped out to a quick lead, and never looked back taking the win, with Cody Turner in 2nd. A2 say more of the same with Dustin getting an early lead, and moving away from the pack. Matt Schreffler was able to hold onto the 2nd position ahead of Cody Turner in 3rd. Dustin would take the overall win, with Schreffler and Turner completing the podium.

4wd Mod – Matt Schreffler started qualifying off on the right foot by taking a dominant TQ in round 1. Dustin Evans would come roaring back though in the 3rd round to snag the TQ away from Matt, and would better that time in the 4th round. A1 saw Schreffler have a technical issue in warm up that cause him to reitre, and Dustin would cruise to an easy win. In A2, Dustin would break and have to retire, and Matt had issues with lap traffic, but came back to finish 2nd. This setup an all out battle in the 3rd main for the title. Dustin would get a good start and lead early, but Schreffler stayed very close, even pushing Dustin in spots. Matt eventually made a small bobble and Dustin would pull out his lead and take the decisive win give him the overall title, and Matt finishing 2nd overall!

TLR Drivers were using the following equipment to power them to victory: