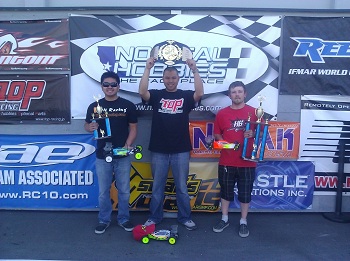 Norcal Hobbies one of the premier facilities on the west coast boasting both a permanent paved on road track recently hosting the Reedy Race of Champions is also well known for it’s two world class outdoor offroad tracks. Located in Union City, Ca. Norcal will also be hosting this years 1/10 ROAR Electric Nationals. TLR Racing would send no less than Dustin Evans, Frank Root, Cody Turner and other factory drivers to attend the 2011 Norcal Offroad Champs sighting great testing prior to the ROAR nats.

Held over the weekend of June 11th the Norcal Offroad Champs would have a class for everyone. EJ Evans notably from TOP Racing would debut his offroad skills in the 2wd 17.5 NR(non ramping) class taking the overall Tq and win using a Tekin RS Pro.

Next up would be Team driver Bobby Gately. Gately would go onto to Tq Pro 4 Short Course using Tekin’s RX8 and SC4x 5.5 motor on a truck just picked up at the track! His Tekin powered Losi SCTe looked dialed in the mains. He would go on to win the class with smooth driving and luck in this hotly contested division.

Finally Tekin team driver and Norcal Hobbies very own Kevin Jelich would go onto win the 1/8 E Buggy class. The track is “epic” to say the least boasting HUGE jumps and a very challenging surface. Kevin had great battles with Jesse Stark who won A1, Kevin taking A2 and A3 to secure the win with his Tekin Powered AE RC8b.