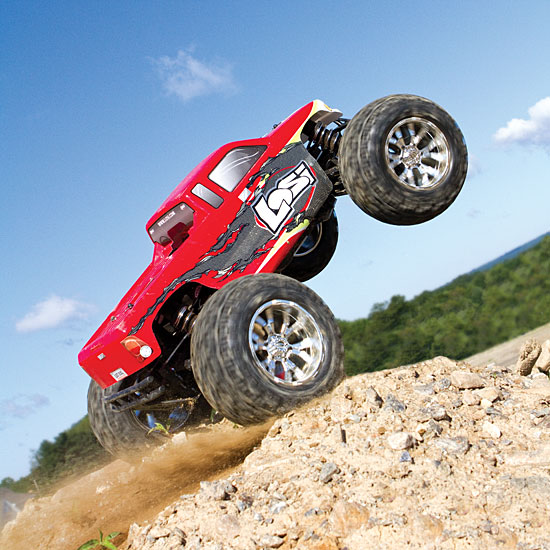 It’s no question – the sensation of speed is one of the most popular aspects of radio control. Racers and bashers may differ in many ways when it comes to how they enjoy their favorite hobby, but they both share their desire for faster acceleration and higher velocity. From cleaning and oiling bearings to installing more horsepower, there are many ways to make your car faster – some without spending any money!

I dug deep into the RCCA archives for this gem – nine easy go fast mods. Enjoy the read, then start wrenching – after all, you’ve got races to win…even if they’re just down the street.

Who doesn’t like to go fast? Nobody. Who wants to go faster? Everybody! Without spending a lot of time or dough, following these 8 tips will help you add a few more miles per hour and a little more distance between you and the second-fastest guy on the block. Think of them as “speed reading.”

Most nitro cars come with unrestricted carbs, but if your carb has a restricter (such as on this Associated GT2 RTR), you can gain a few mph by popping it out. When we tested the GT2 RTR, removing the restricter added 2.7mph and made the throttle punchier, which is great on pavement and other high-grip surfaces but can cause spin outs in low-grip dirt. So, if you pop the restricter, keep it in your toolbox; you may want to put it back in!

USE A 7-CELL OR LIPO PACK

Upgrading to LiPo power will save more than 3 ounces of weight and increase voltage for a significant speed boost.

Boosting voltage is an easy, no-mod way to increase the speed of any electric car, provided your speed control can handle the extra juice. If you switch from a 6-cell pack to a 7-cell, you’ll increase voltage from 7.2 to 8.4 volts and have a significant increase in off-the-line punch and top speed. You can get a similar benefit (along with reduced weight and increased run time) by switching to LiPo power. A 2-cell LiPo pack delivers 7.4 volts; that doesn’t seem like a big voltage gain, but it does make a very noticeable difference in performance because the pack is also 3.5 ounces (give or take) lighter than a sub-C pack.

More nitro means a bigger boom with each combustion cycle, and that means more speed (or at least you’ll have the power you need to spin a taller gear ratio, and that will mean more speed). For maximum engine life, we suggest that you run 20-percent nitro for regular running, but when it’s time to crush the other guys in the neighborhood, reach for a jug of 30 percent. But be warned, the engine will run hotter.

SPEED INCREASE ªUP TO 15MPH

Swapping a Neon’s 4-banger for a big-cube V-8 would be a herculean task in the full-size hot-rodding world, but similar performance gains are as simple as removing two screws on an electric RC car. Most RTRs include an anemic 540 motor that’s good for about 18mph; install a modified motor, and you can easily double that speed; the lower the number of winds, the faster the motor. One caveat: the faster the motor, the greater the strain it will put on your car’s speed control, hence the “motor limit” rating for most speed controls. Check your speed control’s manual, and stick with a motor that has the same number or more winds than the limit.

SPEED INCREASE ªUP TO 2MPH

Fresh bushings can actually outperform grease-packed ball bearings, but bushings quickly degrade and that costs speed. For maximum velocity, metal-shielded (not rubber-sealed) bearings are best. Most cars already have ball-bearing transmissions, so all you have to do is pop bearings into the hubs. The speed increase won’t be dramatic and will depend on the state of your car’s drivetrain before the install, but you’ll get more than speed: bearings greatly outlast bushings and take the slop out of rotating parts.

Gnarly monster treads are fine for the dirt and grass, but their excessive weight and rolling resistance robs you of speed on pavement. If you trade those treads in for street rubber, your truck will need less power to overcome that weight and rolling resistance, leaving more power for pure speed once you’re geared to take advantage of that power and to compensate for what will likely be smaller-diameter tires.

SPEED INCREASE ªUP TO 10MPH

The only thing more amazing than the amount of power a little nitro RC engine can make is how much less power it makes if the needle settings are just a little off. We’ve seen guys give up half their engine performance to bad tuning, typically by running the engine too rich. Lean the high end out by turning it clockwise 1/12 turn (think of it as 5 minutes on the face of a clock), and make a few passes to see if your engine reaches higher rpm (and thus, higher speed). When the engine stutters at full throttle or starts running closer to 300 degrees, it’s too lean; aback it off until the engine sings a clear high note at full throttle with a faint smoke trail from the pipe.

If you can trim weight from your ride, it won’t need as much power to get up to speed, and that means it can go even faster. Exactly how much weight you can lop off depends on the type of vehicle you have. A burly monster truck with 8 shocks, heavy tires, a reverse-gear servo and other not-essential-for-speed parts can be lightened significantly by removing the superfluous parts, but a racing-style buggy, stadium truck, or touring car might only have a few grams to offer (don’t bother).

When looking for weight savings, go to the wheels and tires first. The old racers’ adage “a pound of rotating weight is like 2 pounds of non-rotating weight” is very true, especially if you have a monster truck with heavy chevron tires!

GEARING THE REAL SECRET OF SPEED

All of the tips outlined in this article can increase speed, but to really take advantage of them, proper gearing is essential. Otherwise, you’ll probably see quicker acceleration but little or no increase in top speed, which isn’t necessarily a bad thing, as acceleration wins more races than sheer speed. But when absolute speed is the goal, it’s all about gearing. To understand why, think of your car as a bicycle, and its engine as your legs.

Put your bike in first (the easiest) gear, and you can easily pedal to your maximum rpm. You probably aren’t going very fast, but you can really spin the pedals. A lighter bike, more aerodynamic position, or reduced rolling resistance won’t help you go any faster, since your legs are already going as fast as they can. So you up shift the bike to a taller gear ratio, and you go faster, and you keep up shifting and going faster until the gear ratio is too tall for the strength of your legs to overcome. The same thing is going on in your RC car. Unless your modification increases the motor’s or engine’s rpm, your car won’t go faster. But if you make it more powerful (or free up more power by diverting less to fighting inertia and rolling resistance), your powerplant will be able to turn a taller gear ratio for more speed just like an Olympic cyclist is able to go faster because he has stronger legs to turn a bigger gear on his bicycle.

PUTTING IT TO WORK IN RC

There are two ways to gear up an RC car for more speed: install a pinion or clutch bell with more teeth or a spur gear with fewer teeth. This will make your car roll farther with each turn of the engine’s crank or the motor’s output shaft and thus increase speed. Try going up two teeth maximum on the clutch bell, or up to four teeth on the pinion gear. Don’t overdo it; if you gear the car too high, you’ll strain the powerplant, and you may actually go slower. Check your manual for suggested gear ratio ranges.