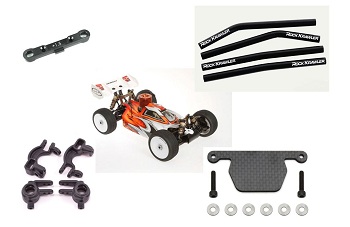 Tekno RC continues to expand its line of option parts for their 1/8 vehicles.  They recently released a new rear hinge brace that gives you another 1.5 degrees of rear toe to help you with increasing traction in your Tekno ride.  Along with that they have released an optional black composite spur gear, some M4 countersunk washers, 6x8x.2mm shims, and replacement M2x5mm cap head screws that are included with their aluminum hexes.  The folks over at RC4WD have partnered with Rock Krawler Suspension to release officially licensed extended length aluminum links for the Axial Wraith.  These links are designed for extending the rear axle on the Axial Wraith and have a smooth anodized coating with a laser etched logo on each link.  Team Associated has released a Factory Team centered ESC mount for B4.x, T4.x, and SC10.x owners.  Since the TLR 22 platform was released AE pliots have been experimenting with this mid electronic setup and with this upgrade you can easily mount your receiver under this mount when using a shorty LiPo pack.  This setup will make you car change directions better, especially when on high grip surfaces.  Serpent has released a RTR nitro 1/8 buggy for entusiasts looking to jump into the nitro scene.  This buggy was designed by former World Champion Billy Easton and is fully upgradable with Serpent’s race spec line of option parts.  But the best feature is that it includes a Novarossi 3-port XS pull start engine with a nice laser etched Serpent orange cooling head.  Finally, some good news out of the RPM camp for Traxxas Slash 4×4 owners.  They have released caster and steering blocks that look like they will hold up to most front end collisions.  These are sold together in pairs and they are also compatable with the Traxxas Stampede 4×4 and Rally vehicles.

Click the links to see and read more in the Hot News & New Stuff forum.