The best part of any large, nationally recognized race is that manufacturers like to debut new products. This event was no exception to this rule, so let’s take a look at what’s new in the pits. 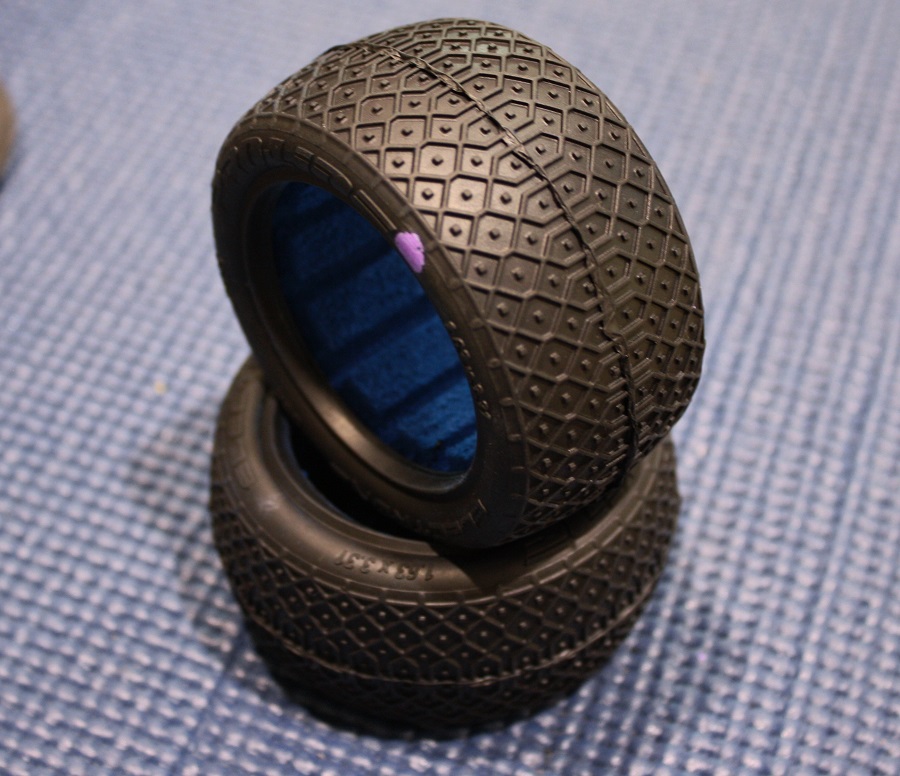 Pro-Line brought along with them their recently released Electron Lite 2.2” rear buggy tires. These tires feature a lower profile design with smaller and more densely packed pins. This aids in more consistent forward and side bite, and Dakotah Phend used them in their MC compound to capture the overall TQ in Mod 2wd and 4wd that weekend. 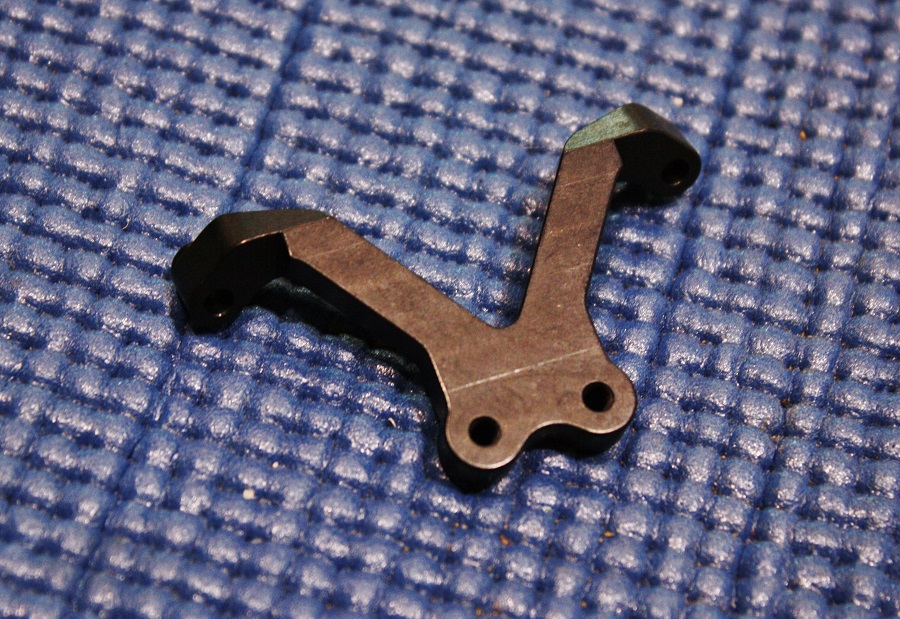 Phend was also using their newer front wing aluminum mount for the TLR 22 3.0. This mount is also available for other popular 2wd buggies, and each mount is sold as a kit which includes two wings and all the hardware needed to mount them to the buggy of your choice. 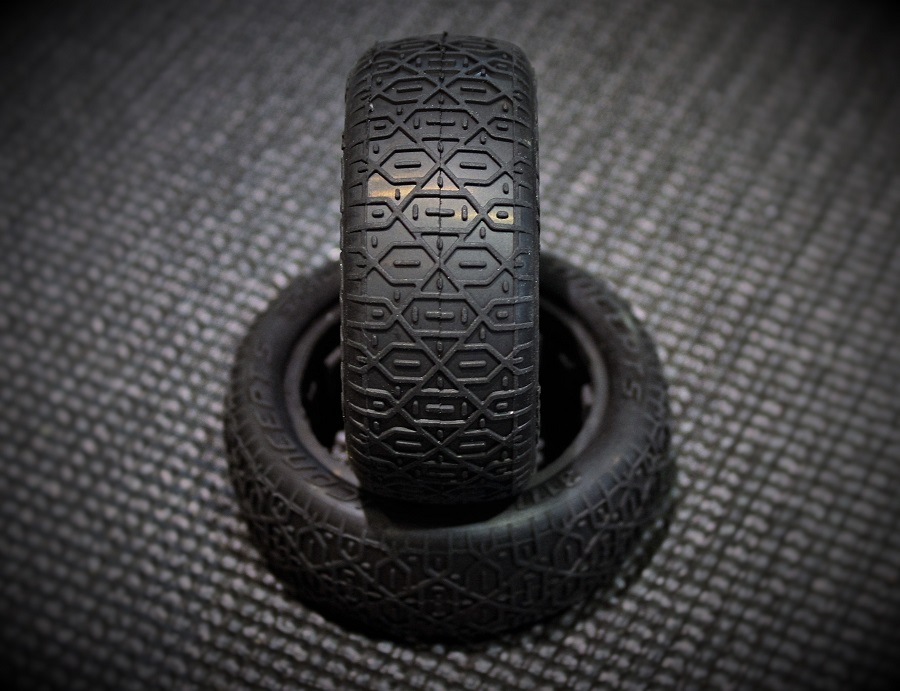 JConcepts was also debuting some new gear during this event. First up was their new front (2wd only) and rear (2wd/4wd) Space Bars 2.2″ buggy tires. 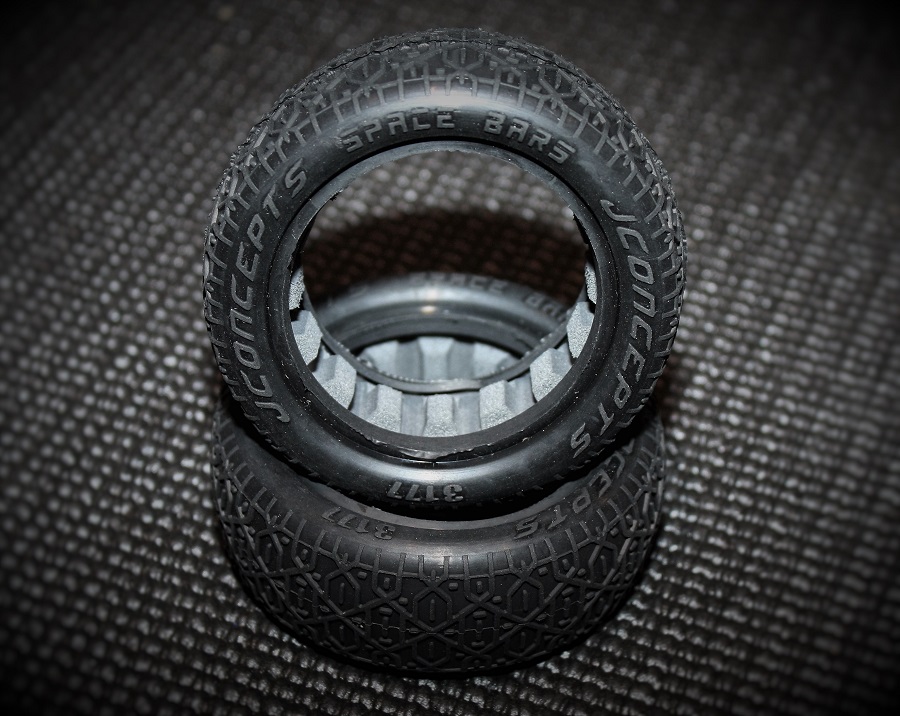 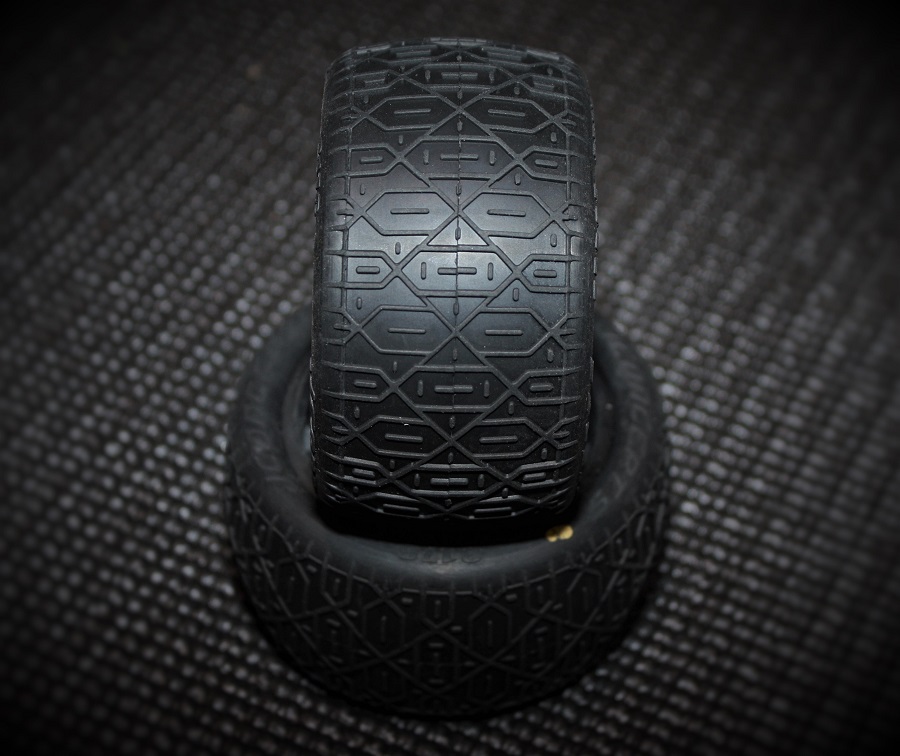 These tires took the popular tread design from the Dirt Webs and “spaced” them out more to help the tires break in quicker. They also feature a shorter sidewall which will give you a better tire profile when the foam inserts start to wear down.

Their popular S2 body for the AE B6 includes a long chord Aero wing, so debuting that weekend was the short chord Aero wing which is shown on the right. This option part is shorter from front to back, and should help with cornering speed on high bite tracks. 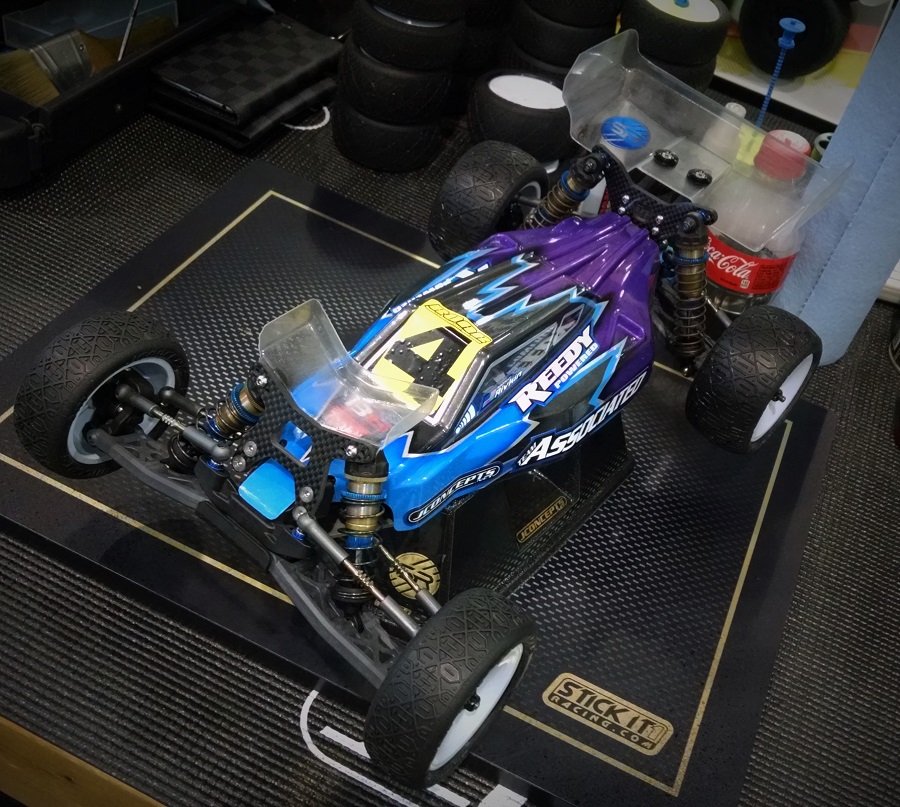 Current 2wd IFMAR World Champ Spencer Rivkin was running these tires and wing during the event. 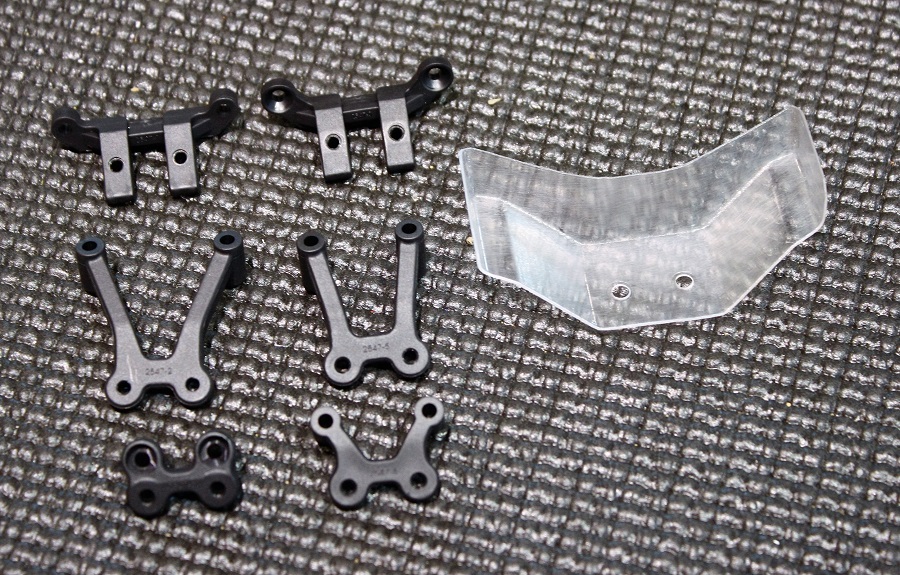 Also on display were their new molded lower front wing mounts. Previously these were only available as a 3D printed part for the AE B5M/B6 and TLR 22 3.0. Now they have developed a plastic version that is compatible with those vehicles, plus the Yokomo YZ-2, XRAY XB2 and Kyosho RB6. Each Aero lower wing will be sold separately or as a complete kit for each specific vehicle.

Finally, they now offer an upper front wing that mounts behind the front shock tower for all of the modern buggies I just mentioned above.

The Trinity team made the trip to the Plex from Florida, and on display was some of their newest gear. They now offer “Monster Horsepower” chassis protectors for the AE B6 and XRAY XB2. Each protector is cut to perfectly fit either vehicle, and they also include two separate wraps for just the transmission. This way if you need to rebuild your diff, etc. you can simply remove only this small wrap and will have another one as a spare. 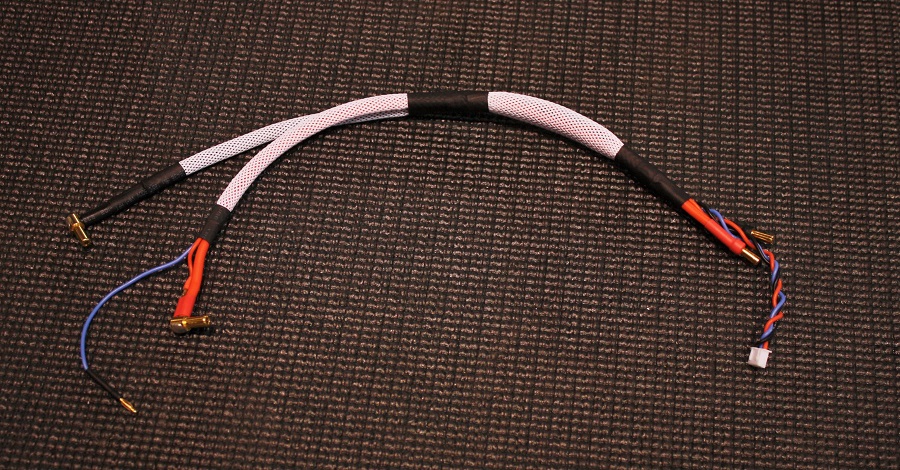 The team was also using their new charging cables. The positive and negative cables are split further back on the charging lead to give you more flexibility when charging your packs, and they are also comprised of more durable materials. Two versions are available, a shorter 14″ white carbon cable and a longer 24″ monster green cable. 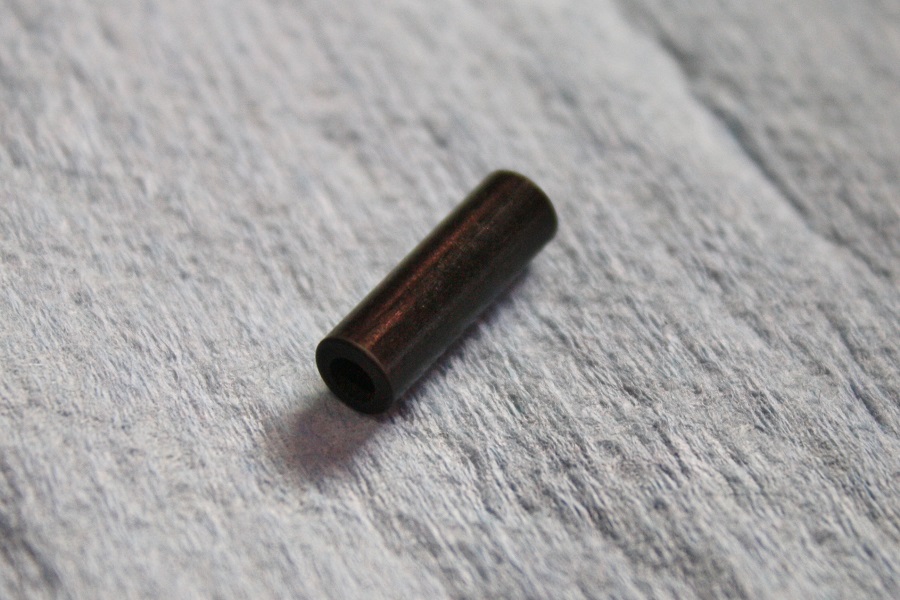 X Factory R/C brought along some of their new carbon fiber goodies like these idler shafts for AE 5/6 series, TLR 22 series, and Kyosho RB5/6 series of vehicles. These are press fit into the bearings which eliminates any movement so that your idler gear will last longer. This also eliminates any wobble, and are also slightly lighter than the stock component. 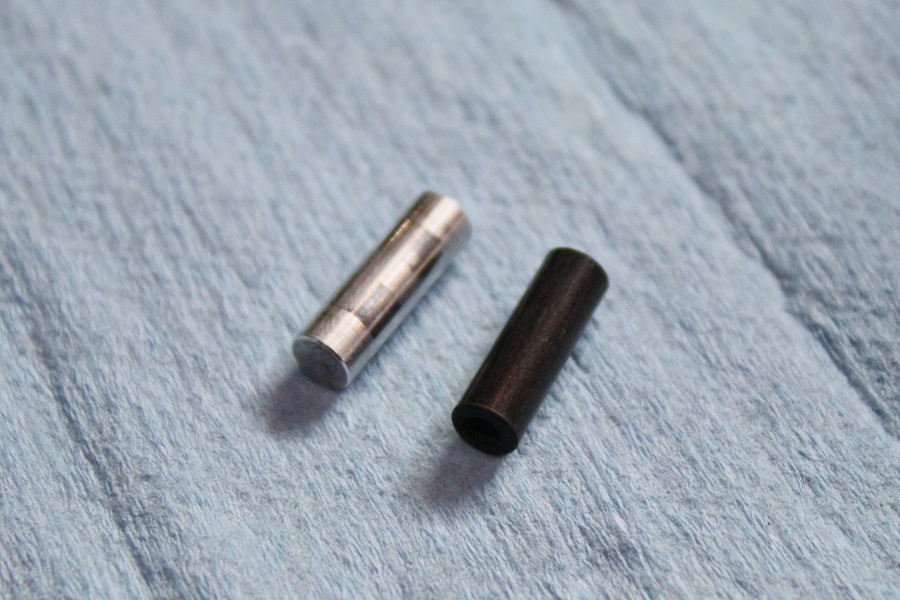 Here you can see the stock idler shaft on the left and the wear marks from the bearings over time.

They also had some of their new Infinity Carbon Fiber Shock Towers for the B6 & B6D too. The stock parts are 3.5mm thick, but these towers are 4mm which makes them more durable. 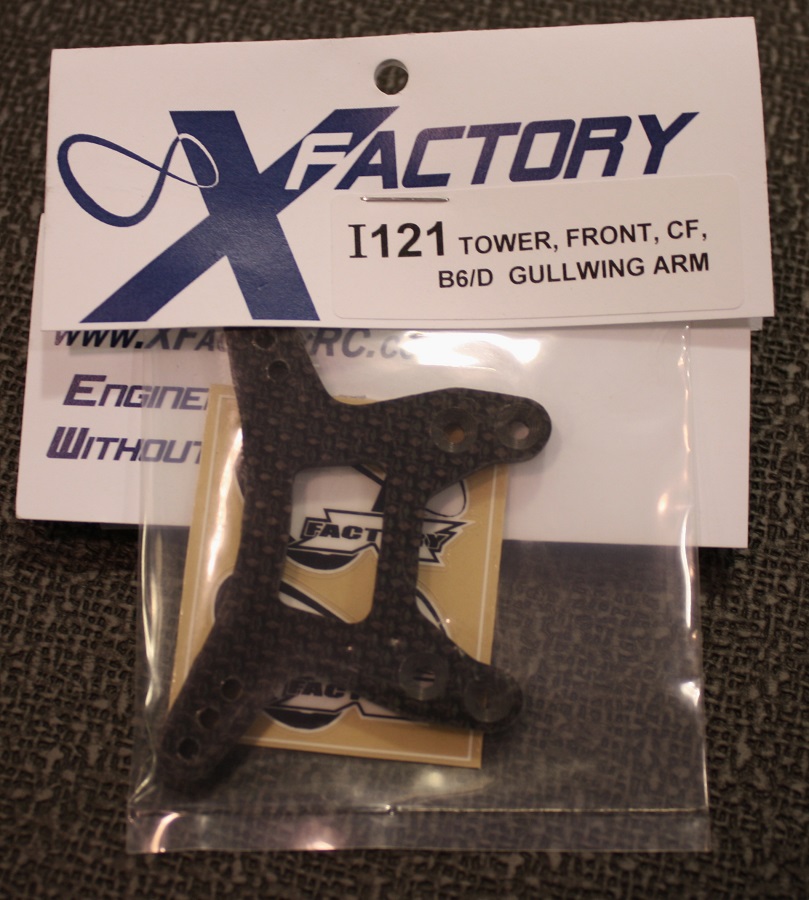 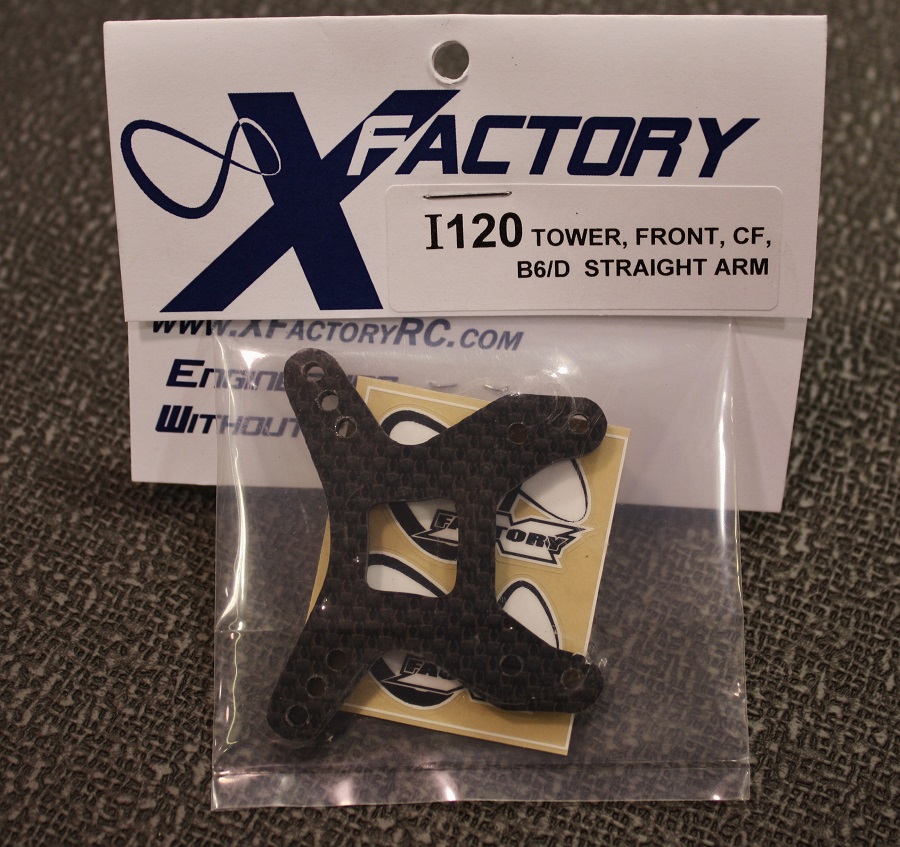 There are two versions of each front and rear tower. The front towers have been designed to work with either straight or gullwing arms. For the rear towers, one variation is a direct replacement while the other is slightly taller so you can mount the longer B5/B5m rear shocks to gain more traction and stability. 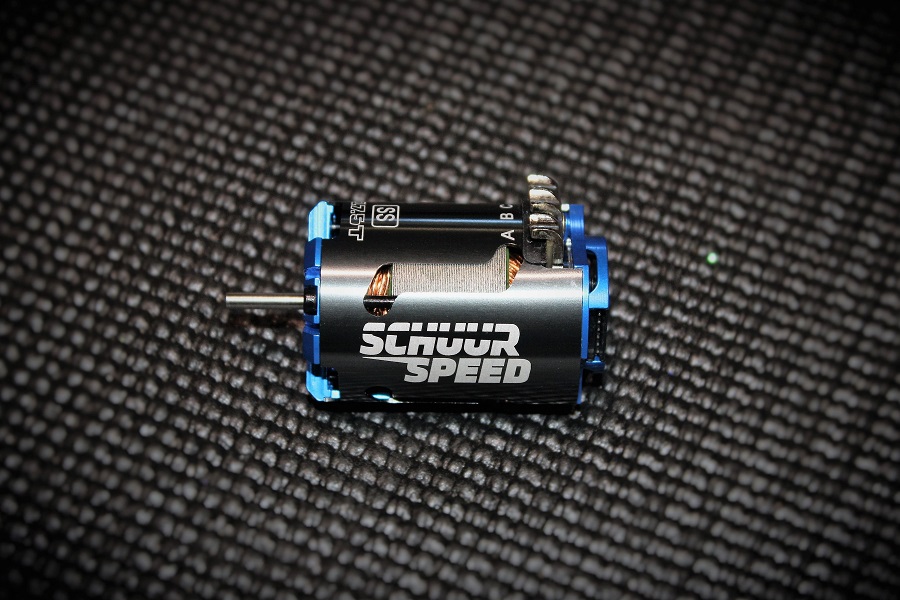 Schuur Speed was showing off their latest new gear. 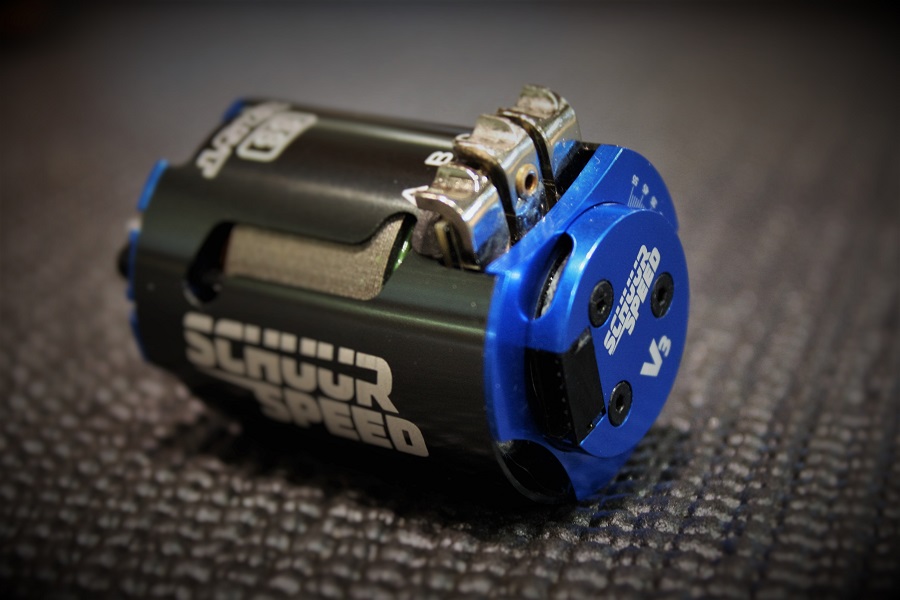 About a month ago they updated their Extreme and Signature “SELECT” SPEC V3 motors with a newly designed endbell. It uses small vents to help with cooling, and the sensor board and sensors are new too. 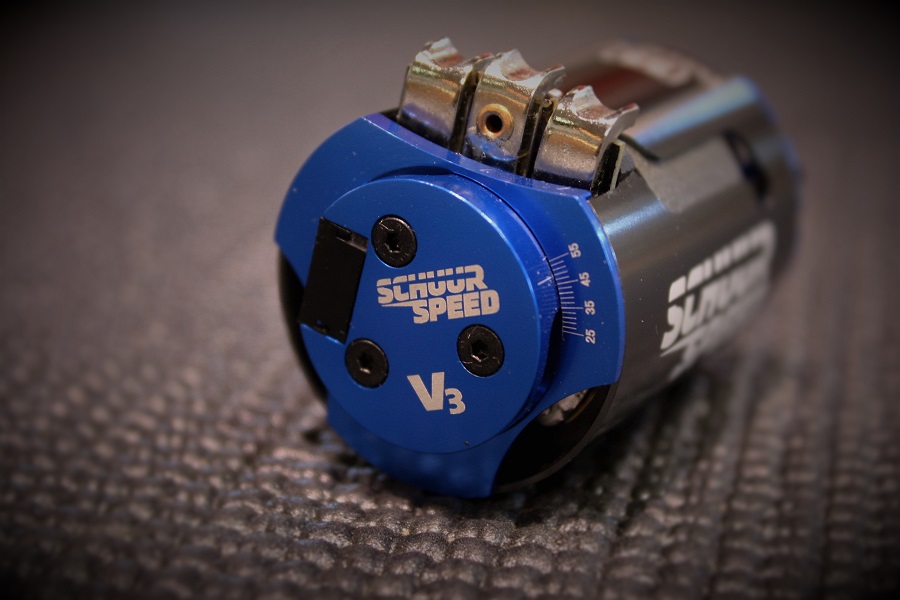 This new endbell is also sold separately for customers who want to upgrade their existing motors, and I’m told that very soon they will start to offer mod motors as well. 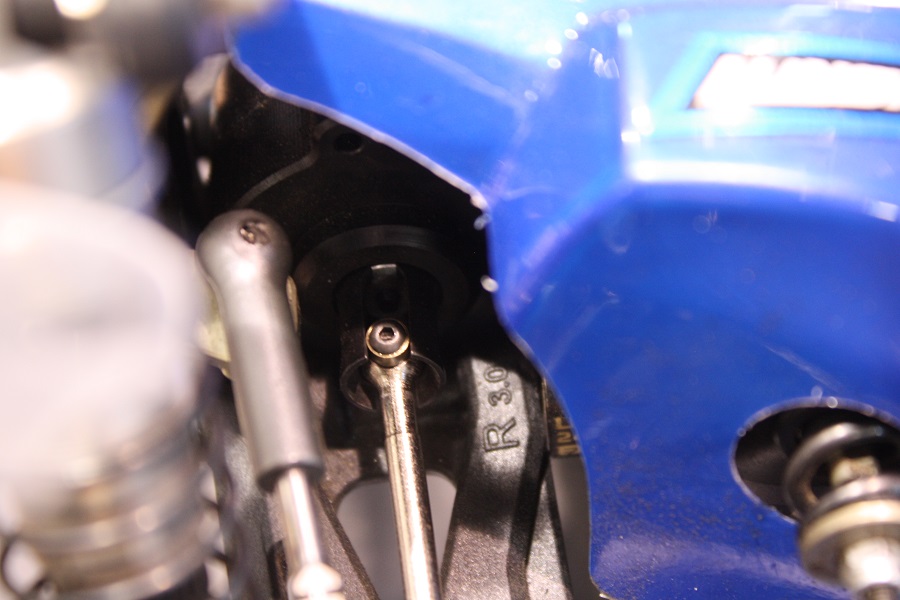 The roller pucks works with either MIP’s steel or bi-metal outdrives, and since the roller puck is replaceable it can lessen the wear on your other drive components. 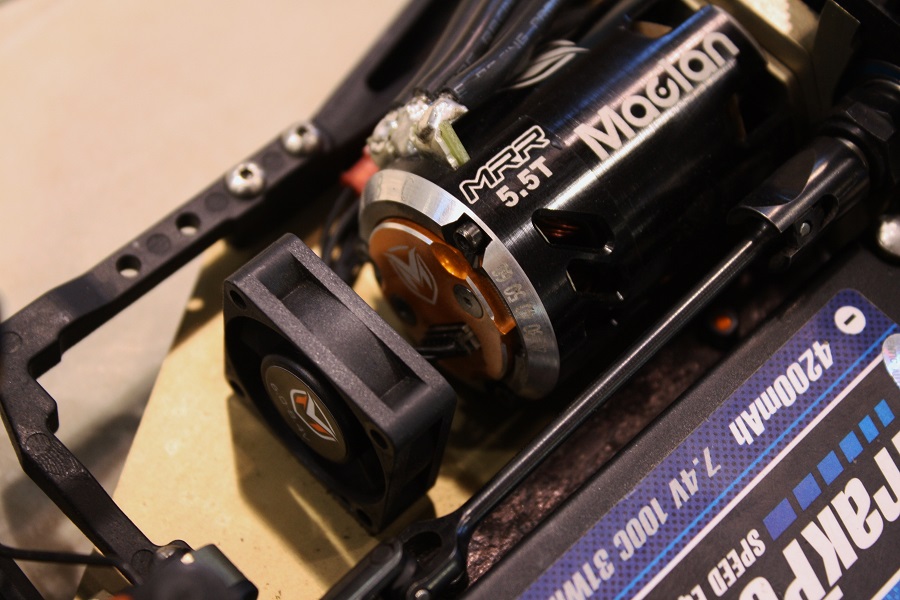 The Maclan race team was running their current MRR 1/10 sensored competition motors. These motors were released earlier this year and are ROAR approved. 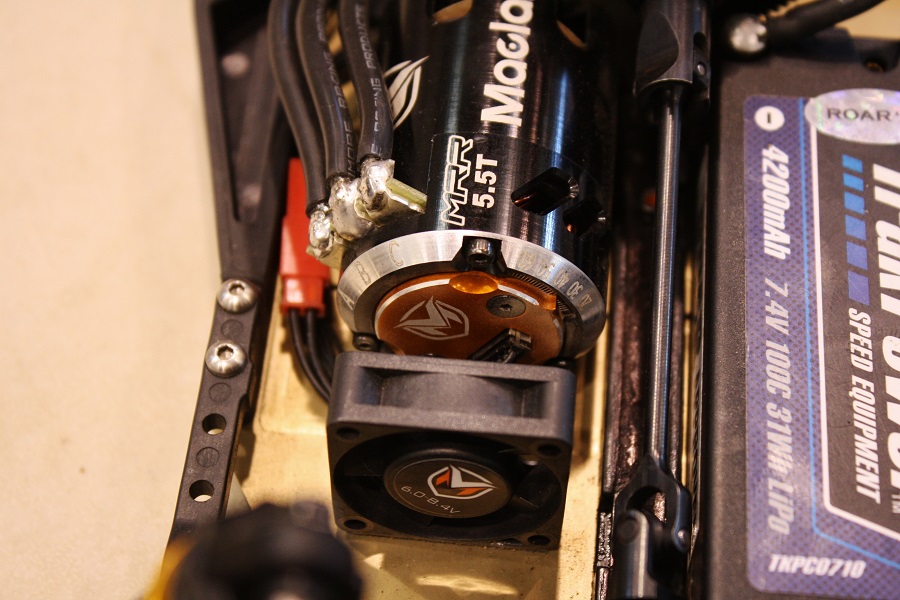 They feature a full aluminum case, high grade copper wire, and rumor has it there is a new ESC on the horizon. 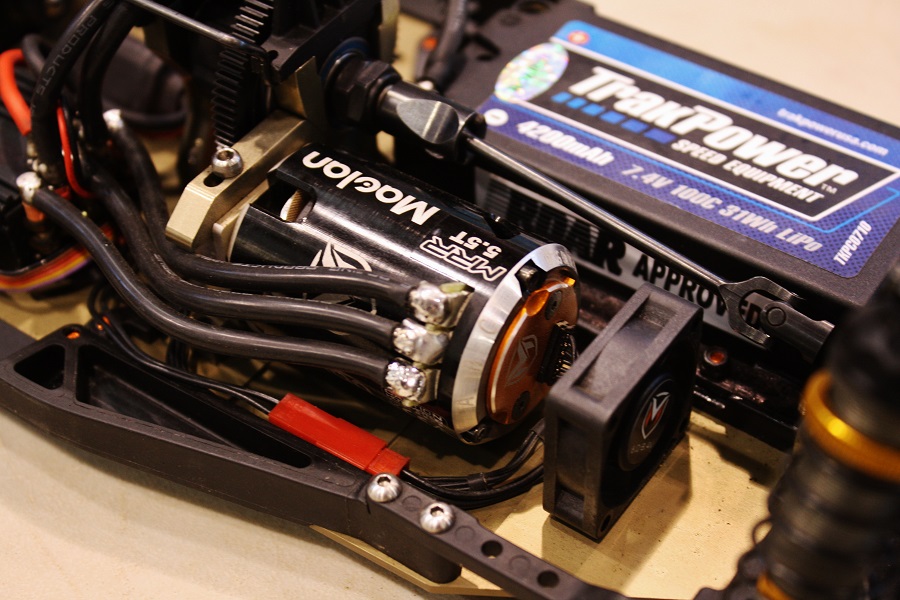