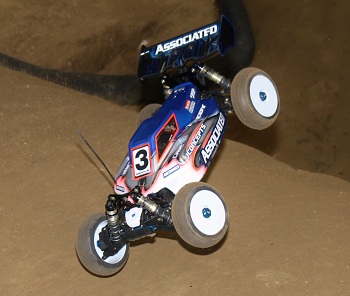 Last year I was fortunate enough to attend some big RC races and shoot some exciting racing action while I was there.  As we enter 2012 I thought I would share with you the best races of the previous year that I was able to capture on video.  In the videos below you will see some great battles and passes on the track, plus some good driver etiquette that we can all learn from.  Without further delay, here is my top 5 from 2011:

Classic battle between Kyosho driver Jared Tebo and Team Associated’s Ryan Maifield. Tebo TQ’ed this class and won A1 but a late mistake in A2 allowed Maifield to take the win. So the national title came down to this 3rd and final race and it went to the wire between these 2 pros.  This was the 1st race at the Hobbyplex’s new indoor off-road track which is one of the largest RC facilities in the world.  This also gave the drivers a chance to “break” in the new building too.

The Losi XXX-SCB didn’t have a class to compete in on the tour, but they were used in a special race during the finals on Sunday. Each TQ driver from the five classes that weekend competed in an exhibition race featuring the new XXX-SCB. Since Team Losi Racing’s Dustin Evans TQ’ed both the Modified 2WD and 4WD classes he had TLR’s Matt Sunderlage fill in for him to pilot one of the SCBs. Sportsman TQ Thomas Kreuser held the pole position for this special race and he got off to an early lead. Just over two minutes into the race he clipped the outer wall of the sweeper and knocked his SCB out of commission. But HPI’s John Schultz gave Thomas his radio so he could wheel John’s buggy instead. Could Thomas battle his way back to the lead?  Watch the video below to find out.

The Hobby Haven Shootout is one of the biggest trophy races in the Mid-West each year. Last year’s event drew an impressive 225 entries, but even those large numbers couldn’t keep the rain away. So the races were moved to the local small indoor track, and we saw some big action in the main events.  In this video you see a tight battle between the top qualifier in the fluorescent yellow SC10 4X4 and the 3rd place qualfier in the Losi TEN-SCTE. The Losi driver already won A1 and is looking to capture the title for this class by also winning A2. The two drivers get in a tight contest as they battle on the track for position. As the saying goes “rubbing is racing” but that being said even experienced drivers know that if you spin someone out the classy thing to do is to wait for your opponent to get marshalled and then take back the lead from you. You expect this from a veteran driver, but not a 12 year old kid as you see in this video.

For the number two video we go back to Trackside for a single A Main duel between Team Losi Racing ace Dustin Evans, and legendary driver Brian Kinwald piloting a Team Associated SC10. Evans TQ’ed this class and got out to early lead, but a small mistake allowed Kinwald to take over for the lead as Evans charged hard to catch him. If you watch this video you will see some great racing between these two drivers, and another example of driving etiquette. Kinwald might not have won this race, but hopefully even in defeat he taught young drivers who were watching what the right thing is to do is in racing.

Finally, my favorite race I shot last year didn’t even involve rc cars. I attended the 2011 Midwest Short Course Nationals on a hot day in July, and after all the Mains had been ran, the young drivers took the track for what the race director called a Hillbilly Kid Run. The young drivers simply had to complete 1 lap around the track, on foot!  Towards the middle of the race two kids pull away from the pack and make a dash for the finish line. I like this video for two reasons. The first is that just the site of these kids giving it their all as they run around the track on foot is hilarious. The second reason is that if you watch the video one young contestant learns a hard lesson in racing which is to never assume you got the win and let up while you are in the lead.

So there you have it. I hope you enjoyed these videos as much as I did and please leave your comments below.