This was the fifth year that Monster Jam’s driver of the Zombie monster truck, Bari Musawwir, hosted the RC Monster Jam World Finals during the pit party, and it didn’t disappoint. He, along with a dedicated team, arrived early and transformed a section of the Camping World Stadium lot into a dirt track with scale jumps and pods made from wood that loosely replicated the track that Monster Jam drivers would compete on, complete with a figure eight and over-under jump that the competitors had to navigate.

The RC Monster Jam World Finals event consisted of three different races for the fans to enjoy during the pit party on Saturday and three freestyle competitions during the pit party on Sunday before everyone headed into the stadium to watch the Monster Jam World Finals. For both racing and freestyle there was the Main Field event with 24 trucks driven by RC competitors who were invited, a Monster Jam Driver class, and a special “Grave Digger Only” class also driven by the RC competitors who came from all over. 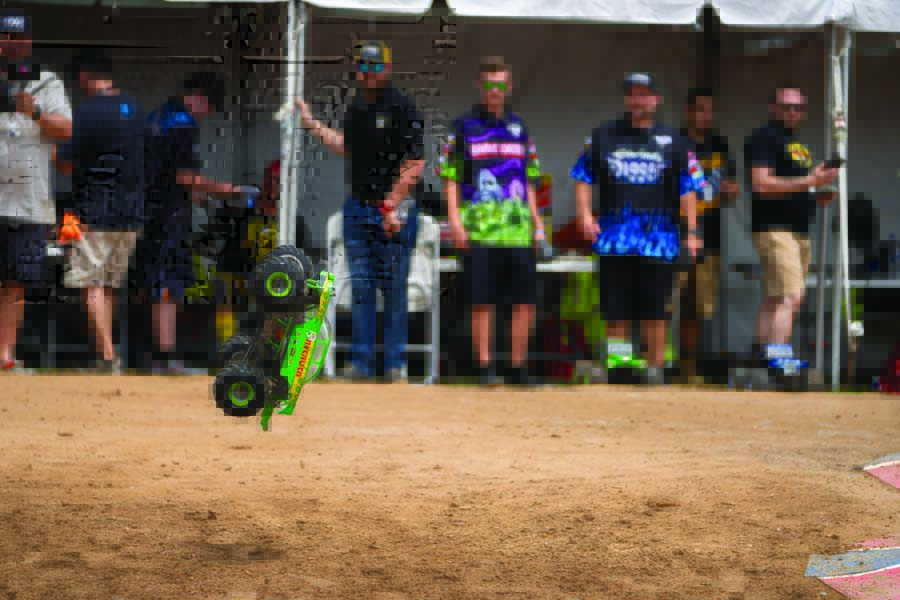 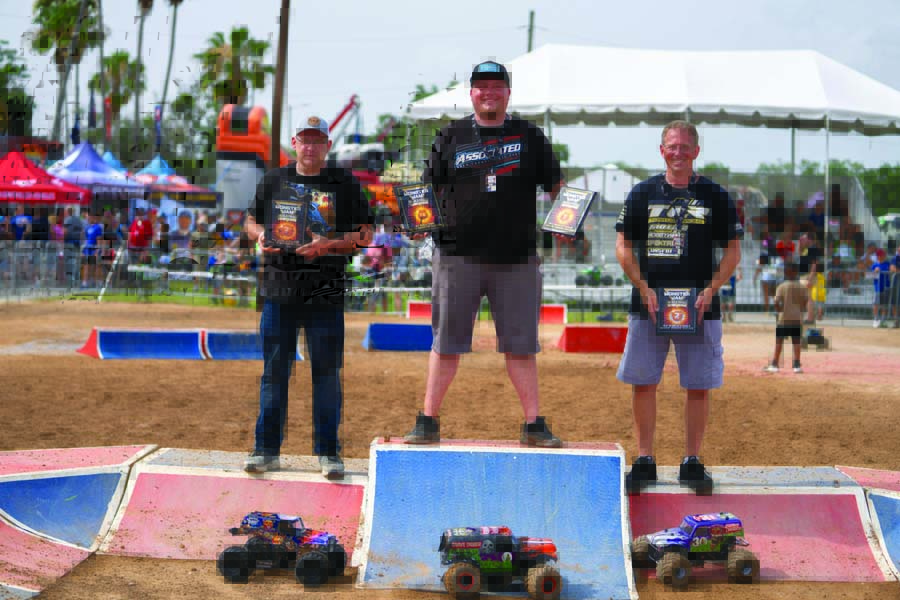 This year was the celebration of 40th year of the Grave Digger monster truck, which had a great display of the history of the real trucks in the pit party, but also with the two RC events that had a specific race and freestyle class comprised of the many different body styles used by Team Grave Digger throughout the years. Bari Musawwir put in the time and effort to create many of the bodies that were used in this Grave Digger Anniversary RC class and the wraps used for other replica Monster Jam trucks we used in our other race and freestyle classes. It was impressive to see all the trucks lined up on display near the bleachers for the fans to check out when we weren’t racing.
On race day, there was a lot of excitement in the air… and water on the ground. In typical Florida fashion, we had thunderstorms roll in Friday night that soaked the track. When we arrived on Saturday morning there was a small pond that had formed in the middle of our track that made it look more like we were going to race RC boats than monster trucks. It seemed racing was going to be impossible, but the team of RC drivers and crew sprung into action to shop-vac out the water and work to get the track as dry as they could. This track repair took the place of our practice time, so the qualifying races served as practice to get a feel for the changes in traction from our practice runs on Friday.

The competitors took it in stride and showed their professionalism throughout the day. It meant that trucks needed extra attention after each run to get the extra weight of the mud off before their next runs. The extra weight was really hard on my servo horns, as I stripped three of them during the qualifying and racing. (I didn’t do a great job cleaning my trucks between races as I was trying to video the event to post on my YouTube channel.) The Main Field racing ended with Ethan Saunders taking first and third place and Trever Adamo grabbing second. Johnathan Schultz took first place in the Grave Digger Class with Trever Adamo in second and Tad Goad in third. 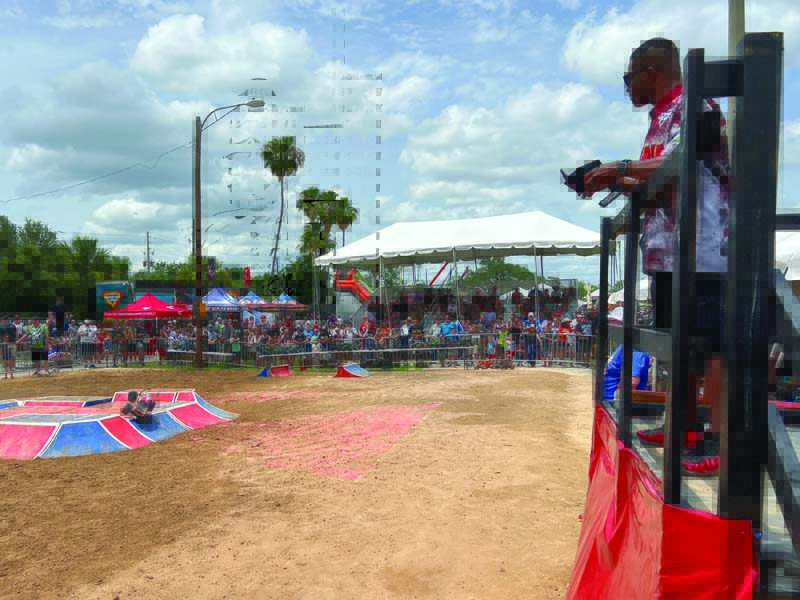 Bari concentrates on his freestyle run with his custom Zombie LMT as the crowd cheers him on. 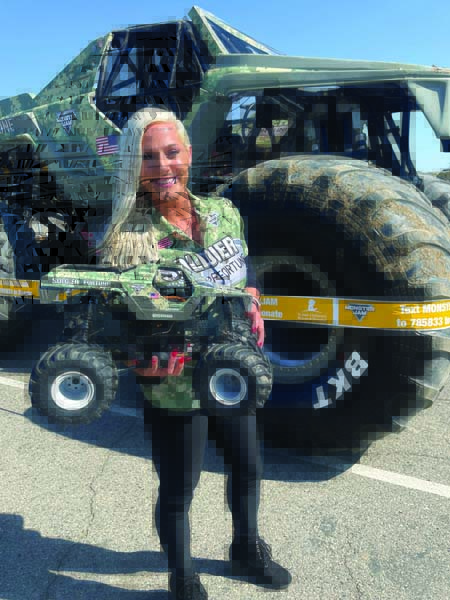 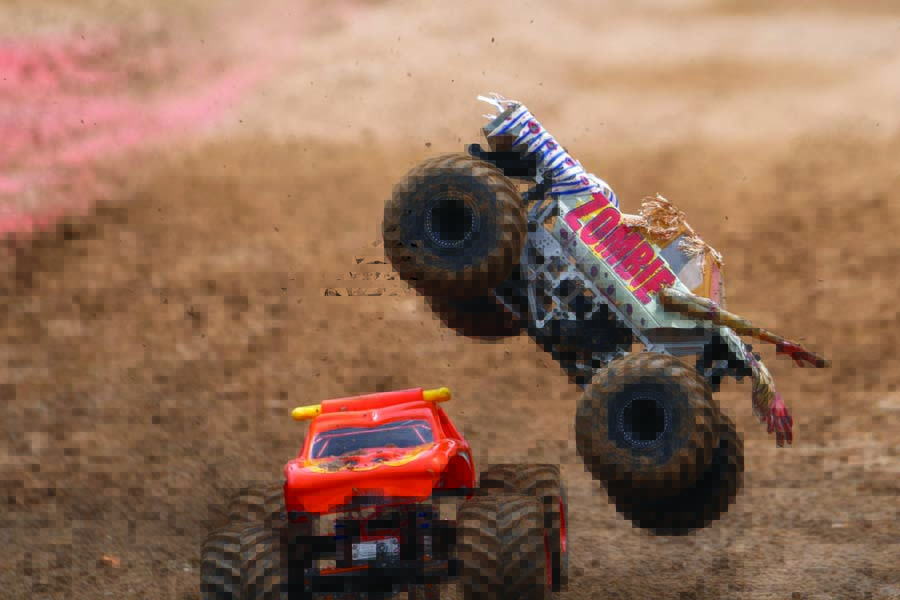 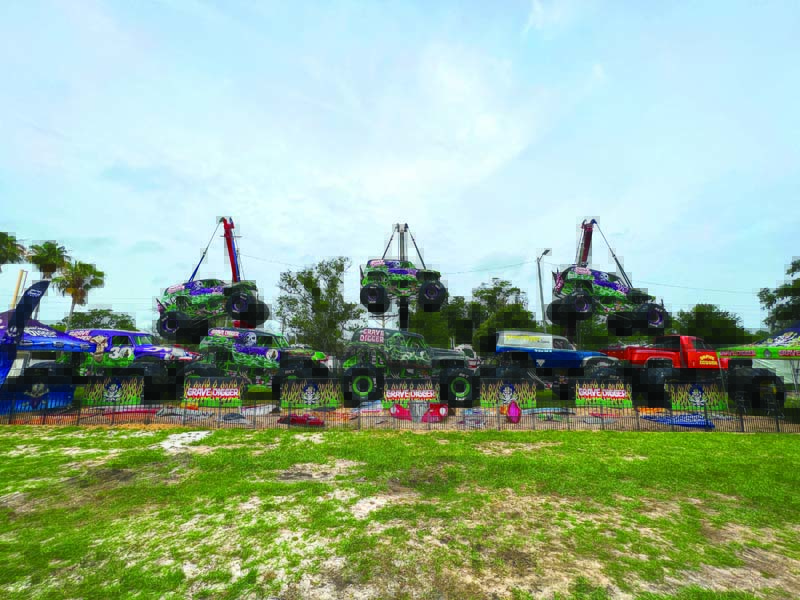 Celebrating 40 years of Grave Digger at the pit party. 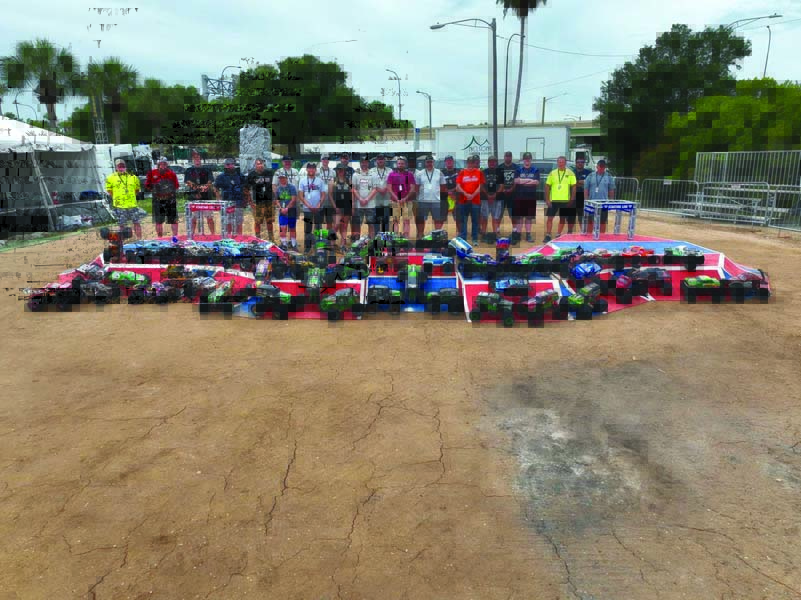 The RC Monster Jam World Finals crew and drivers stand in front of the gallery of trucks run in the event.

After the Main Field race, the Monster Jam drivers took to the track with replicas of their real trucks. Cynthia Gauthier had an amazing LMT with a custom Lucas Oil Stabilizer body, Coty Saucier had an impressive Dragon body, Kayla Blood had a 3D-printed Soldier Fortune body, and of course Bari had his Zombie body complete with flailing arms—just to name a few. In my opinion, the Monster Jam drivers racing and doing freestyle was the highlight of the RC event, and they were actually really good at driving them!

During practice, Tyler Menninga was getting his LMT into bicycles on demand—I can’t even do it with the regularity or longevity he was. Weston Anderson was playing around hitting the pod on one side and whipping the truck in the air to downside on a ramp at a different angle than the approach. Coty Saucier took the racing win in a tight finish against Bari Musawwir, with Camden Murphy beating Ryan Anderson for third place.

In freestyle, Ryan Anderson took second place by driving his LMT on the ragged edge while still in complete control just like his does his full-scale Son-uva Digger, and Jim Koehler burned it down, slamming his Avenger into every obstacle for big air and crazy saves to take the win. As a bystander, it was fun to see them interact with each other and the audience. When something would break on their trucks or someone had a dead battery, they’d all spring into action and start working on them together. They could’ve handed it over to one the RC drivers that were all there watching, but they were fully involved in the event and put on an epic show for everyone watching.
Freestyle took place on Sunday after another heavy thunderstorm drenched the track on Saturday night. The rain started at the beginning of the championship race and led to one of the craziest Monster Jam races I’ve ever seen. The skies opened and torrential rain started to fall as Brandon Vinson and Ryan Anderson were staging their trucks for the final race—Grave Digger versus Son-uva Digger. The green lights shone through the thick rain and the trucks started slinging mud and slowly building momentum as they slid around the track, getting just enough speed to clear the over-under jump and slide around the corners. As they came into the last corner both trucks spun out, but Brandon was able to avoid the wall and get his Grave Digger pointed in the right direction to take the win! After the races we went and looked at our track, and we knew we’d have our work cut out for us to get to ready for freestyle Sunday morning.

Freestyle is what I was looking forward to most as a competitor. I’ve been having so much fun perfecting freestyle moves with my RC monster trucks over the past two years, and the track layout they had set up for us offered a lot of great opportunities for big air and backflips. I had set my Main Field and Grave Digger class trucks up for durability with freestyle in mind. In the Main Field I was running a Freestyle Pro-C truck with custom acrylic lower links so I wouldn’t have rod ends to break easily after big air and bad landings.

The truck was outfitted with a Jester body that Bari made for me and looked amazing flying through the air doing huge double backflips and front flips. Freestyle was judged by the fans, and it was evident that they liked big and crazy stunts. I went early in the pack and positioned myself in first place with an 8.9286 score that held until the last run, when Fred Reep threw down a fantastic run in his JConcepts Slinger body to take the win with an 8.968. In the end, we ran out of time for the Grave Digger class freestyle and decided to put on a freestyle show in true Grave Digger fashion and burn them all down. Everyone ran their trucks until they couldn’t drive any more. There were broken axles, broken links, broken shocks and Grave Digger trucks parked as yard art on the course as fans cheered on the mayhem that ensued.

While we are competing, we also know that the main goal is to put on a show for the people in attendance. It was evident that the racers understood this and there was a great deal of camaraderie and laughter throughout the weekend. That’s why we were OK with the amount of work we’d have to endure to fix our trucks after running them as hard as we did. The track had bleachers set up on two sides for people to gather and enjoy the action.

One standout factor of this show was the announcing done by the DeFalco brothers, Kyle and Dan. Their knowledge of monster trucks and their ability to keep energy flowing during the races and the downtime was incredible. They kept us running on time and made sure everyone knew where to be so that there would be constant action for the crowd.

During the breaks, Primal RC wowed the crowd with their new 1/5-scale gas-powered Grave Digger that was unveiled for the first time at the Monster Jam World Finals. I’ve seen a lot of RC monster trucks and even own their Primal RC Raminator, but seeing the Grave Digger body on this beast was unreal. It was one of the best-looking RCs I’ve seen, and they didn’t hold back when driving it for us. Everyone went crazy when Dan D’anna pulled the throttle, getting the front wheels up and hitting the pod to throw the truck forward into a “Lee O’Donnell front flip.” We’ve seen it done with our 1/10-scale monster trucks, but seeing this huge 1/5 monster truck do it perfectly was next level.
Over the last five years the solid-axle monster truck segment of the hobby has seen substantial growth, with readily available ready-to-run Monster Jam licensed versions of trucks from Axial, and most recently the Losi LMT, that have made it easier for people like myself to get involved. 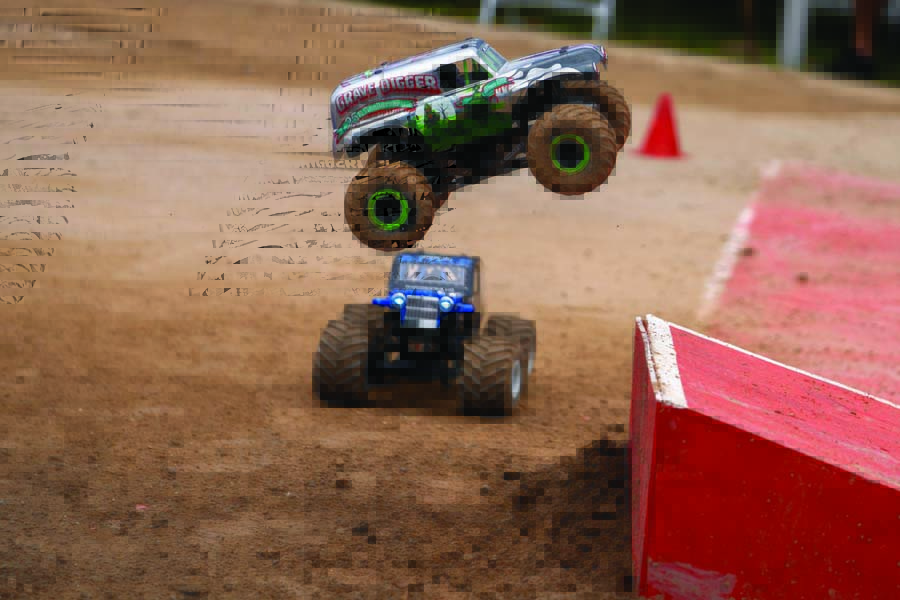 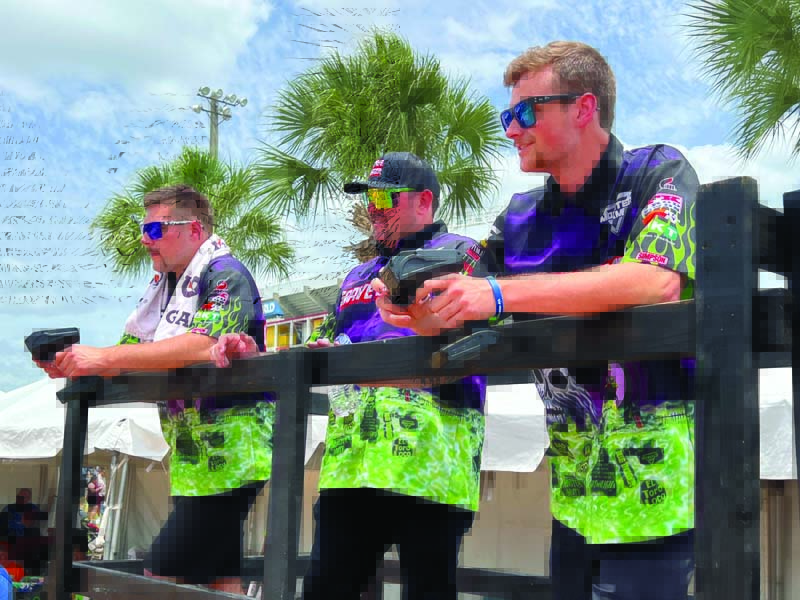 I started in RC solid axle monster truck racing with an Axial SMT10 at the No Limit World Finals at Diggers Dungeon in 2017. I didn’t know much about the RC monster truck racing scene, but I loved monster trucks and wanted to get involved. Back then you still had to do a lot of upgrades to make it capable, but with the release of the Losi LMT the barrier to entry has been removed. I never imagined that one day I’d be racing RC monster trucks at a Monster Jam World Finals event, but like anything in life, you won’t know where it will lead unless you take the leap and get involved. I’m happy that it led me here and allowed me to be a part of this amazing event with RC drivers of this caliber. The RC Monster Jam World Finals is a bucket list event made possible by enthusiasts who love monster trucks and the RC hobby. 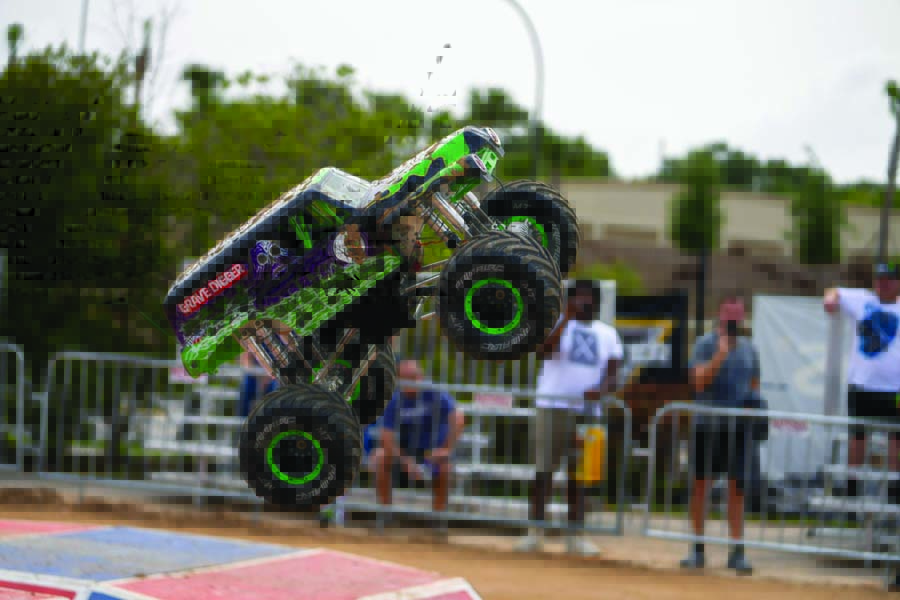 Primal RC impressed the crowd when they debuted this brand-new, 1/5-scale, gas-powered Grave Digger at the World Finals event. 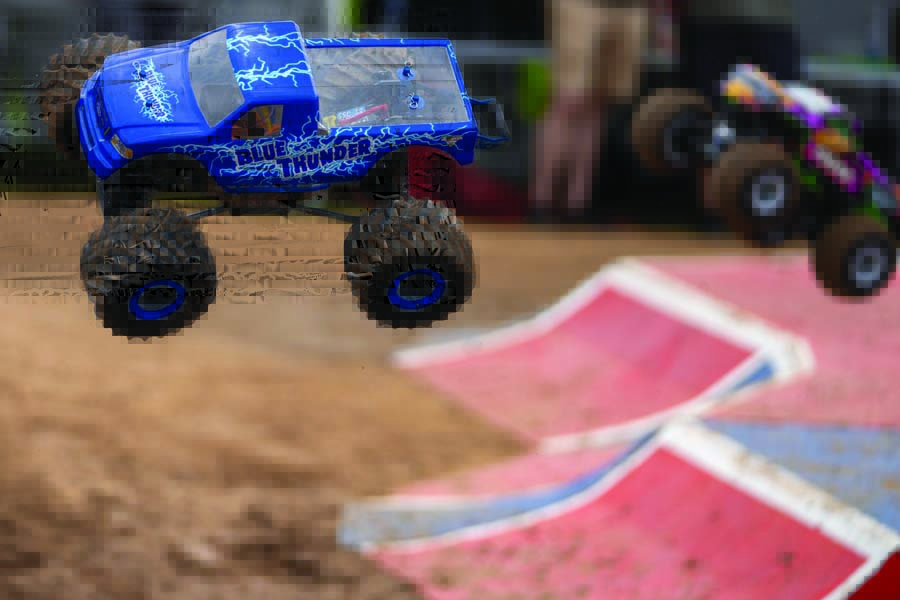 Dustin Spallone airs it out over the finish line to take the win in this heat. 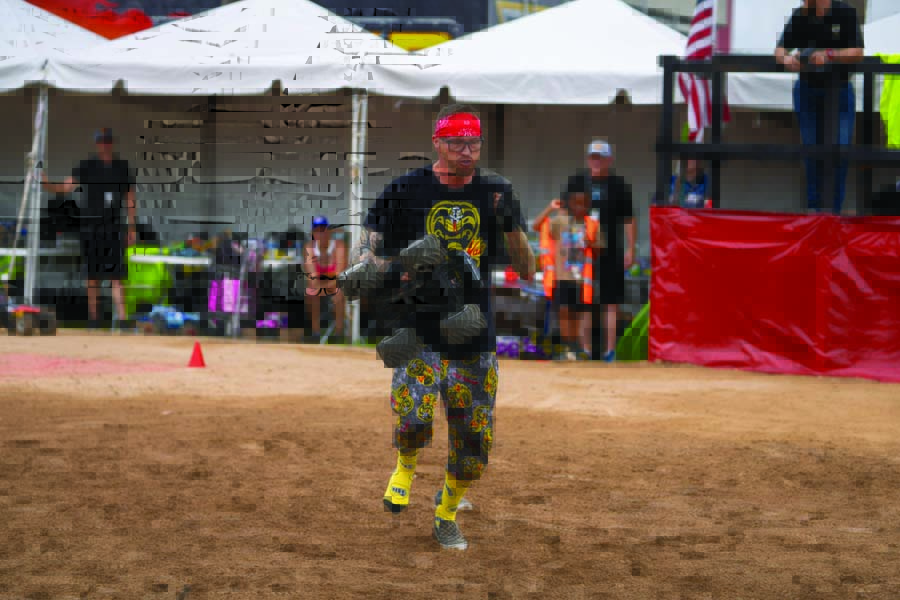 Monster Jam host Scott Jordan challenged his co-host Colt Stephens to an RC race. After his poor training for the race, he decided to try to win it by carrying the truck around the track. 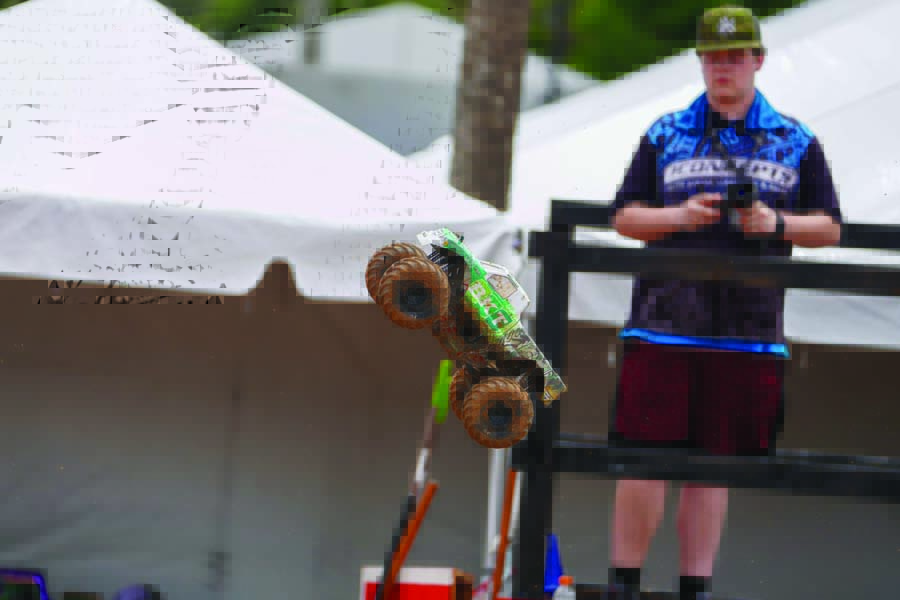 Ethan Saunders’ focus and concentration on his BKT and other trucks kept him at or near the top in most events. 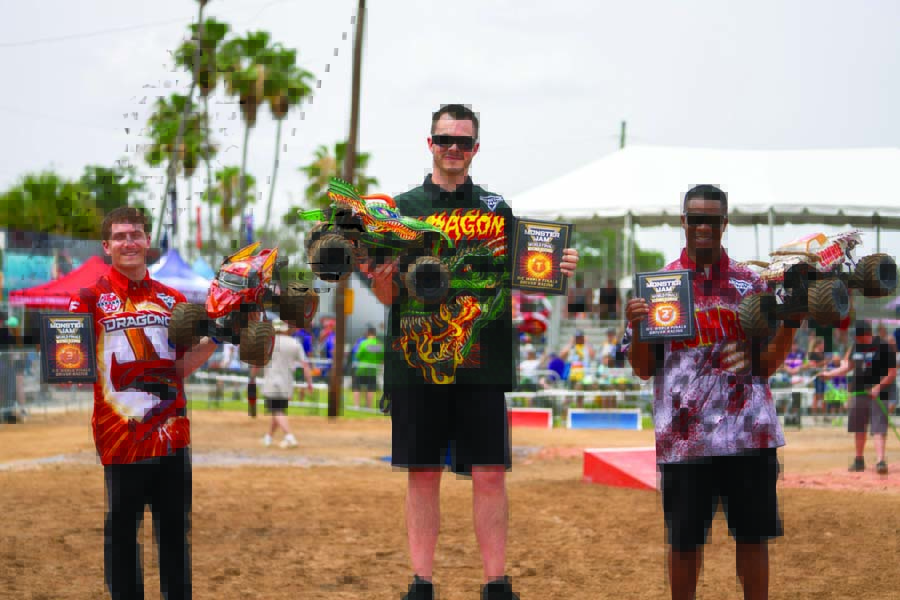 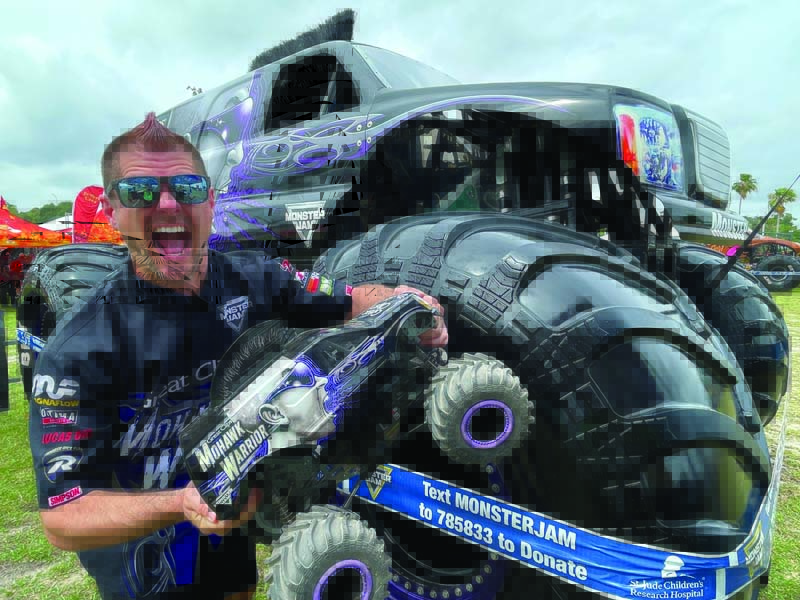 Three screaming mohawks in one photo—Bryce Kenny, his Mohawk Warrior monster truck and its 1/10 RC replica.

About the Author
Tony Cece runs CCxRC, a multimedia outlet that’s focused on bringing “RC entertainment for the masses.” CCxRC provides quality RC videos geared for everything from fast-action bashing fun through slow-crawling trail trucks, and all RC that lies in between. Check out CCxRC’s videos by visiting ccxrc.com today! You can also follow CCxRC on social media by looking up the handle @ccxrc. 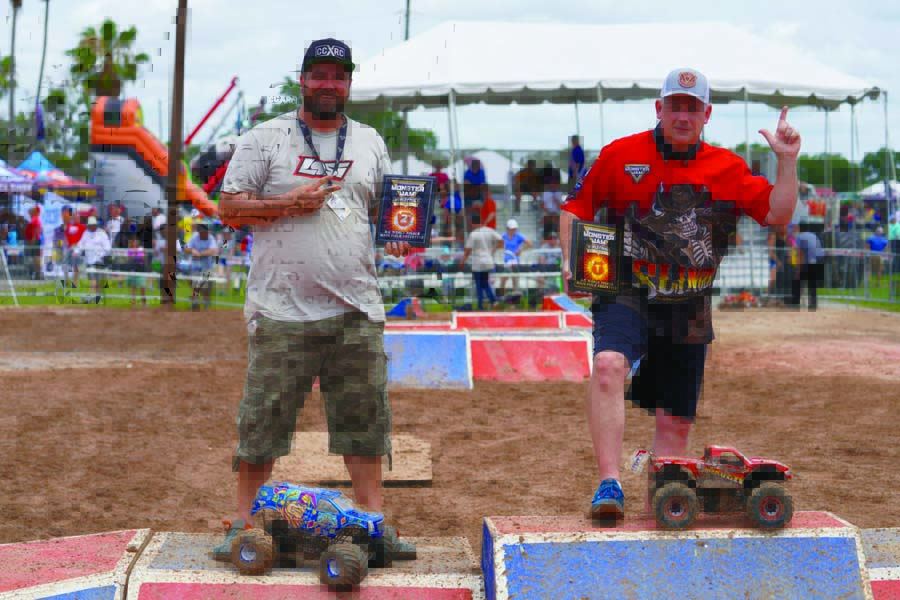