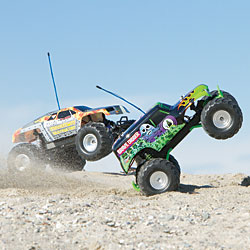 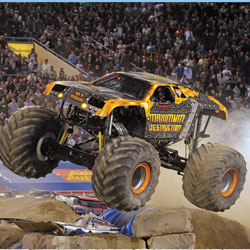 It’s a fact: motorheads, young and old, love monster trucks. What’s not to love? Monster trucks have gobs of horsepower. We’re talking well over 1,000hp. And, these trucks are no ordinary pickups; they crush cars. And while mashing metal might be their hallmark move, today’s monsters can literally fly over the cars without touching them. Need more? Monster trucks have sophisticated racing suspensions with swaybars and advanced gas-charged shocks. I could go on and on, but the bottom line is monster trucks are big gnarly mega machines that just get the blood flowing. That’s why thousands of fans fill arenas and stadiums all across the country when the one-and-only Monster Jam rolls into town. Traxxas recently teamed up with Monster Jam as the official hobby-class radio control truck of the series and wasted no time unleashing four hot Monster Jam trucks onto the RC scene: Grinder, Monster Mutt, Maximum Destruction and Grave Digger.

Stampede platform
Traxxas clearly wants a truck it can get in the hands of new users, and the Stampede platform is a wise choice. It’s fast, durable and relatively simple. Experienced RC’ers know this vehicle well and can appreciate all those attributes. The Stampede is a classic in RCfor good reason. The molded composite plastic chassis features a narrow raised center section thanks to front and rear skidplates that drop the rear gearbox and front bulkhead down low. The Monster Jam replicas use the Traxxas Magnum 272 transmission that features metal gears and rubber-sealed ball bearings. The hubs on the ends of the suspension arms feature bronze bushings, which help keep the cost low, out-perform plastic bushings and are easily replaced with ball bearings. The slipper is the Revo-spec Torque-Control unit that is durable and adjustable, and power is transferred to the rear wheels via Traxxas sliding plastic universals. The Stampede suspension has always worked well. Unlike a full-size monster truck that uses solid axles, the Stampede has independent suspension with lower H-arms and fixed upper links. The shocks are composite plastic and fluid-filled.

Waterproof
Everyone knows water and electronics don’t mix, but that doesn’t change the fact that sooner or later these trucks will be run through some water, blasted over snow, or plunged into a nasty mud puddle. Traxxas has been offering its electronics in blue for a few years now, and that blue color isn’t just for looks but indicates the components are waterproof. So do what you will with these Monster Jam trucks, they can take it. The XL-5 speed control and 2056 steering servo are waterproof by themselves, and the AM receiver is tucked in a sealed radio box tucked up next to the speed control.

Included Electronics
The Monster Jam replica trucks are brushed motor equipped. The included Titan 12-turn 550-size motor is good for an impressive 30mph because Traxxas includes a 7-cell Power Cell hump pack. Traxxas also includes a simple no-frills wall charger. The XL-5 speed control has three modes: Sport (full forward and reverse), Race (no reverse) and Training (50% power forward and reverse). The 2056 steering servo puts out 80 oz.-in. of torque, which is plenty for a fairly light 2WD truck. The TQ transmitter is AM, simple and straightforward. It’s comfortable and reliable though light on features.

Monster Jam Upgrades
In addition to the four Monster Jam replica bodies, Traxxas made a few other key changes to complete the transformation. Up front, a new bumper has a more realistic styling than the original Stampede bumper. Underneath the body shell, new body mounts accommodate the unique styling of the Monster Jam bodies. These additions are subtle in comparison to the new tires and tires. The styling of the rims and the realistic tires really seal the deal. The dish wheels have all the details of full-size monster truck rims, and the tires look like custom-cut racing tires. Traxxas went with a black chassis and green components on the Grave Digger, but the other trucks feature gray chassis with black pieces.

This is Monster Jam!
The car-crushing, dirt-slinging action of Monster Jam is everywhere. In addition to gracing TV as much as any other form of motorsport, Monster Jam often rocks at a dozen locations on any given weekend. Trucks such as Grave Digger and Maximum Destruction are household names, and their respective drivers, Dennis Anderson and Tom Meents, have legions of loyal fans. Monster Jam is sanctioned under the USHRA (United States Hot Rod Association), but the show goes beyond U.S. borders and is truly a worldwide phenomenon.

The Pit Party
One of the reasons fans are so mad for the monsters of Monster Jam is because they have amazing access to the trucks and drivers they love. Monster Jam attendees are by no means limited to just cheering from the stands. The famous Pit Party lets people get up close and personal as they check out the trucks, meet the drivers and crew and collect autographs.

World Finals
The World Finals in Las Vegas, NV, each spring is the Super Bowl of monster truck racing. Two national champions are crowned each year, one racing champ and one freestyle champ. The two-day event features an extra-long racing track with much higher speeds than typically seen in side-by-side monster truck racing, and the freestyle layout is pure insanity with the biggest and craziest obstacles ever.
Racing
Monster trucks started out as an entertaining sideshow to keep motorsport fans excited during intermission. The big trucks, however, soon became the main attraction, and side-by-side monster truck racing was born and soon going mainstream. The courses range in size from small with one set of cars to crush to downright massive with multiple jumps and turns.

Performance
Since most of the trucks we’ve run lately were brushless and LiPo-powered, we expected modest performance from the beginner-friendly Monster Jam replica trucks; however, we were pleasantly surprised by some real power. The included 7-cell pack really brings these trucks to life. When there’s traction to be found, these trucks easily pull wheelies. They have strong acceleration and feel  well, fast. When you punch the throttle, dirt and sand fly, and I can attest that even experienced drivers will be satisfied with the top speed. We radar-tested the trucks in box-stock trim and got 23mph. When we swapped in the included 19-tooth high-speed pinion and 83-tooth spur, we got 27mph. I can’t see it being needed, but it’s safe to say if you bolted in a Traxxas Velineon brushless system and a 3S LiPo pack, these trucks would break 60mph with ease and probably approach or even exceed 70mph. This is possiblemaybe not advisedbecause Traxxas includes a heavy-duty, all-metal gear transmission.
Back to testing: the Grave Digger and Maximum Destruction jumped and handled rough terrain just like the many Stampedes we’ve driven previously, which is to say, the suspension worked great for bashing. The suspension soaks up lots of bumps, ruts and bounces but doesn’t smooth things out so much that the ride is boring. The Stampede has a fairly short wheelbase, so it gets knocked around a bit, but that just adds to the fun and wild ride. It’s important to note is that the truck can handle some wild terrain, offers lots of stability and is easy to keep in controleven when all you do is hammer around at full throttle. As long as the front wheels are on the ground, the Monster Jam trucks turn well. They’ll push a bit on big sweeping turns, but if you just let off the throttle a bit, they carve some tight corners. The brakes are strong enough for a basher and never seem to fade. We never got an official duration run, but run time is plenty fulfilling with the included 3000mAh battery. Overall, these trucks are a good match for beginners, but experienced RC’ers shouldn’t write them off-they’re lots of fun.