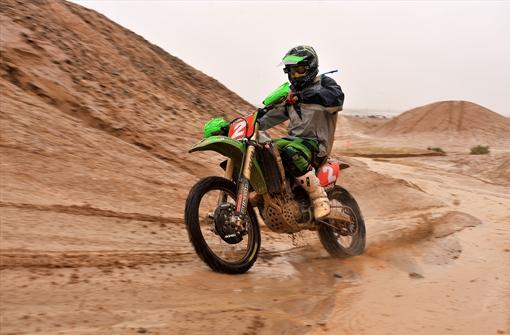 Irvine, California – Monster Energy Kawasaki’s Destry Abbott continued his podium streak with his second-consecutive runner-up finish during the third round of the AMA Hare and Hound series in a drenched El Centro, Calif. The rain-soaked race made for interesting conditions throughout the 96-mile-course, but Abbott’s Kawasaki KX™450F withstood the constant mud, puddles and slippery terrain. Kawasaki dealer-assist rider Robert Underwood, with Kawasaki of Reno, finished with a career-best fourth-place.

Just Racing in the Rain

Rain-soaked courses have been a constant theme for the first few rounds, but what the riders faced just north of the Mexican boarder was extremely different. At the end of the bomb start, Abbott was in 10th as puddles along the start straight made it extremely difficult to see. At mile 21, Abbott got a quick splash of gas, new goggles, and went back out in third. He battled nearly the entire race with former champion David Pearson, but in the last few miles, Abbott got around to finish in second.

“The conditions made it fun and challenging, and then to have some great battles made the day that much better,” said Abbott. “This race is one of the coolest I’ve done in years and it was definitely a fun day of racing. The first loop was unbelievably slick and you had to ride smart. The second loop was awesome and the weather definitely made it interesting.”

Coming into the race, Abbott was tied for the points lead, but at El Centro, Abbott earned a seven point lead on second. Despite riding less than 100 percent during the first three rounds, Abbott’s consistency has helped him move into the top spot.

“It’s nice to be in the points lead, but I really want to start pulling off some wins again,” said Abbott. “I’ve been close, but just haven’t won this year. Come on Idaho!”

For the first time in several years, the AMA National Hare and Hound series returns to Murphy, Idaho. The riders will get a weekend off before making the trip up north on March 21.

“It will be good to get into some different terrain up in Idaho,” said Abbott. “We haven’t gone up there since 2004 and I want to do a little better than my fourth place that I got last time.”