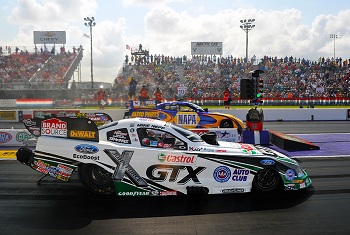 Royal Purple Raceway is regarded as one of the Supertracks of the NHRA circuit. This weekend it showed why as it played host to the Full Throttle Drag Racing Series. Baytown, Texas only has one major motorsports facility, and when the NHRA comes to town it experiences a huge influx of fans, racers, and media alike. The low altitude and coastal weather conditions have made this track known for record-breaking performances. This weekend was no different because the Traxxas John Force Racing Team was shooting to break some records of its own!

Friday’s great weather and track conditions enabled some monster runs during the first qualifying session. The first round results left a huge smile on Courtney’s face. Her Traxxas Funny Car ran a 4.150, the quickest of all the John Force Racing Drivers. John Force made a solid run of 4.212. However teammates Mike Neff and Robert were not able to get down the track cleanly. On their runs, each went up in smoke at nearly the same point, around the 200-foot mark.

Robert Hight ran a 4.153 during the second qualifying pass, getting him solidly into the show. John Force and Mike Neff had minor problems during their passes, only running a 4.269 and 4.318, respectively. Courtney’s Traxxas Funny Car had a unique issue when one of the spark plugs shot out during its pass. There was a small flame as a result, and Courtney wisely shut the car down early to prevent catastrophic failure. At the end of Friday, Courtney would remain qualified sixth, Robert in seventh, and John in tenth. Mike Neff had yet to lay down a good pass and make the show.

Saturday was predicted by the many of drivers to be another great day of fast runs and low E.T. When the initial qualifying session rolled around, that was not the case. The track was hot and the air was marginal, which put the crew chiefs to work on how to get their 8000 horsepower cars down the track. At least half of both Top Fuel and Funny Car teams were unsuccessful. Out of all the John Force Racing drivers, only Robert Hight was able to better his Friday time running a 4.14, the fastest pass of all Funny Car that round. Courtney did manage a 5.065, but both Mike Neff and John Force didn’t even come close to making a good pass, and that left Neff with only one more pass to make the show. It wasn’t going to be easy, as conditions got even worse as the day progressed.

For the final qualifying pass, both Robert and John must have been running the same setup during their final qualifying pass, because both of them went up in smoke right around the 150’ mark. The Traxxas Funny Car made it all the way to half-track before losing grip. The track was so hot and slippery that only a few drivers were able to better their qualifying times. Mike Neff didn’t let the pressure or heat get to him as he ran a 4.166 at 306 mph, finally putting him into the show.

Sunday’s weather turned out to be even hotter and more humid. Luckily for the fans at Royal Purple Raceway, it didn’t affect racing. Most of the teams stepped up to the challenge and put their racecar down the track. In round one the only John Force Racing driver that didn’t make it past round one was John himself. Both Mike and Robert defeated their opponents and Courtney Force finally got her chance to face off against Alexis DeJoria. Both Alexis and Courtney made a great pass down Royal Purple Raceway, but it was Courtney’s Traxxas Mustang that got to the stripe first running a 4.126! Courtney was now slotted to run Ron Capps in second round. She had lane choice and chose the left lane for the second time in a row. Her Traxxas Mustang only managed a 4.17, which wasn’t quite enough to take down Capps who ran a 4.165. Mike Neff and Robert Hight advanced to the semi-final round after their wins in round 2.

In the semi-final round, fans got to see what hasn’t happened since Pomona in the season opening race; Robert Hight losing a round of competition in Funny Car. His Auto Club Traxxas Funny Car hazed the tires near the 800’ mark and Ron Capps managed to slip by him to advance to the final. Mine Neff had another solid run making his way past Jeff Arend running a 4.176. Mike lost lane choice for the final, but that didn’t matter. His Castrol GTX Traxxas Mustang got down the track without problems and Capps’ car slipped right near the end, just enough to let Neff rocket by for the win.

Mike Neff’s win keeps the John Force Racing winning streak alive at 6 wins in a row, dating back to the season opener at Pomona. Neff also adds his name to the Traxxas Nitro Shootout board, only the third different name to get entered to the Funny Car list this year.

The next stop on the NHRA Full Throttle Drag Racing series is Commerce GA for the Summit Racing Equipment Southern Nationals. Traxxas, as usual, will be there with our full line of RC cars, support staff, and mobile hobby store. Fans will have a chance to drive a 1/16 Traxxas rally car, a 1/10 Traxxas Slash, and get to watch our professional RC drivers show the power and strength of the 65 mph Brushless E-Revo! If you are in the area, swing by and check us out. If you can’t make it to the track, check out facebook.com/traxxasracing for news, pictures, and an inside look at Traxxas!