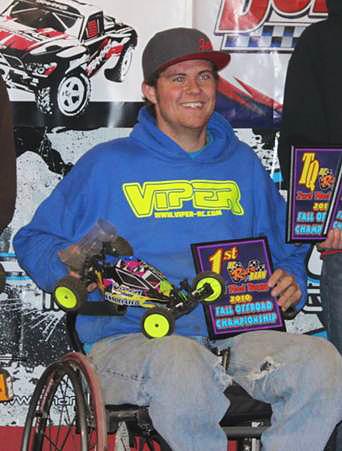 The 2010 Fall Offroad Championship was held at the RC Race Barn in Jefferson City, MO this past weekend. Action-packed racing characterized all classes, but the closest race of them all came down to 2WD Mod Buggy.

As the tone sounded for the A Main, TQ Lendel Smith, Mike Garrison, and Lou Colmo started out front. Top three ran close for several laps before Colmo made a slight mistake, which allowed Smith and Garrison to extend their lead on the pack. The racing went back and forth lap after lap – the two drivers swapped the lead more than five times. Both drivers crossed the loop just in time to get one more lap, with  X-Factory’s Lendel Smith leading the way and Garrison less than a car’s length behind. With two corners to go, Team Associated’s Mike Garrison dove to the inside for a last-minute pass. Smith made a slight mistake as he followed Garrison into the last rhythm section, securing the win for Mike Garrison.