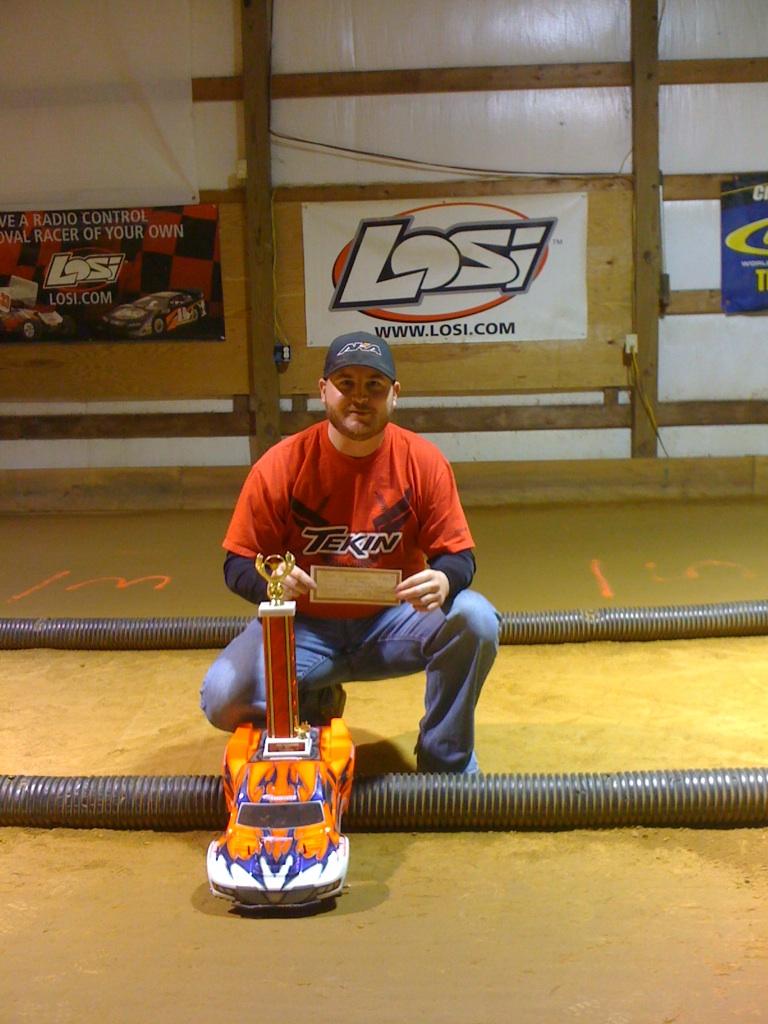 The 2nd Annual Indoor SC Truck champs race was hosted at Reo Raceway in Rockport, IN. The 17.5 Spec SC class has been the biggest class for the past year and a half at Reo Raceway and this past saturday night was no different. Their were 56 17.5 Spec SC trucks in attendance with some of the fastest guys coming from Indiana, Illinois, Kentucky, and Tennessee.

I bought my old FT SC10 back from a friend on Thursday night and worked all night Friday and Saturday morning to get the truck ready to go to try and compete for the win and the $250 that was on the line for this race. I installed a new Tekin RS with a Redline 17.5 and mounted up a few fresh sets of AKA SCT tires. I got the truck finished up on Saturday and put about 10 minutes of practice time in before the quals started.

The first qual started and I was still getting used to the truck and made a few small mistakes that put me towards the back of the B qualifier after the 1st round. I was able to get a a little practice in between rounds and tried a couple different sets of tires and finally made my choice of a set of new SS Gridirons all the way around. Since the turnout was so big they decided to cut it back to 2 quals instead of 3 so I knew I had to be on it in the second qualifier to put it in the A main. I started off the 2nd qual setting a blistering pace and half way through the race I was the only Corr truck to be on a 19 lap pace. I was having a good run going only to get caught up with lappers and have a couple bad laps and drop back about 10 seconds which cost me the TQ by .7 seconds. I was pretty bummed to miss TQ but I was happy to be starting up front and I knew I had the speed and the right tire combination going into the A Main.

The 10 minute A Main started and I got out to a good jump. I settled into the second spot and just paced myself off the leader. We were setting a fast pace out front so I just played the waiting game and stayed on his bumper the whole race waiting for him to make a mistake. We started lapping the field about 4 minutes into the race and I knew I was in the right spot to make a late charge. With about 3 minutes to go I started to make my moves and applying a lot of pressure and showing him my nose at every corner. I had a very good line through the double-double and sweeper section and I knew if I was going to make a clean pass it would come there. When we got 2 minutes to go I made my move around the outside of the sweeper and pulled off the outside pass and was able to get the inside line on the next corner. Once I got to the lead I started pushing the pace and slowly pulled away at the end of the race eventually winning the race by over a full lap. My Tekin 17.5 gave me the power I needed to make the pass on the outside and my AKA Gridirons were dialed the whole main.

In the E-Buggy class we had a small group and some new guys in the mix.

The 1st qual started and right off the bat I knew I was in trouble as I made the wrong choice of tires. In practice I had ran Wishbones and they were awesome but as the track dried out a little they started to go away with the track. I just kept trying to make solid laps and ended up finishing 3rd for the first round. After the first round I decided to switch to the SS Gridirons since the track was drying out and I knew they were working good on my SC truck so I ended up running them in the 2nd qual. When the second qual got started I was flying right from the start and setting a blistering pace. I got in a groove about 3 minutes into the qual and started clicking off fast laps right after another and ended up putting in an awesome run and managed to take the TQ.

The 12 minute A main started and I got out to a huge lead and in the first 2 minutes I got into lapped traffic. I was making my way through the traffic and had already built a 10 second lead on the field. I got into trouble with a lapper right after the quad jump and as soon as the marshall got to the car he picked it up and threw it down right in front of another car and be blasted me in the left rear and broke the camber link so I was done for the main. I was really dissapointed with how it happened but there is always next time. My OFNA hyper 9E was on rails when I got the right tires combo and I had the car to beat all night just had a little bad luck in the main.