After a few months of wrecking everything in its path, our Incredible Hulk green Traxxas Maxx has seen more than its share of crashes, bashes, rollovers and hard landings – many times even on its roof. This virtually indestructible monster truck is whiplash fast and has been tons of fun. As well as it performs we wanted to see what we could do to improve it even further.

Regular RCCA readers might recall a few issues ago that we upgraded our Traxxas Maxx with a WideMaxx set up along with other factory upgrade parts. The real star of the show was Traxxas’ WideMaxx kit, which includes wider front and rear suspension arms that push the truck’s track out an additional 20mm on both sides. The kit also includes a pair of new rear springs to help optimize balance. In this follow up article, we take an even deeper dive and go full throttle on a collection of even more upgrades for this beast of a monster truck. 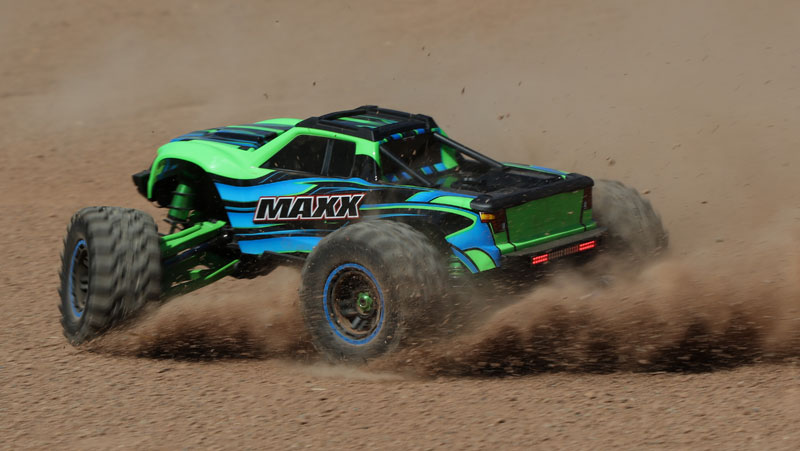 To paint a clearer picture of what this Maxx has gone through, we need to explain where we run it the most. No, the local park just wouldn’t do nor would a local BMX park… we took it out further, literally and figuratively. Our good friend works at a rock quarry out in the dessert, which became a place where the Maxx has lived for a while now.
The quarry’s ten to thirty foot tall piles of gravel and dirt were too enticing for the Maxx to back away from. After getting quick running starts thanks to its 4S LiPo battery, we pushed the Maxx to climb as fast it could, watching for just how high and steep a mound of gravel it could crest. The results of the WideMaxx kit were noticeable around the quarry, as its wide track soaked up the rugged terrain with ease.
As you can imagine, the Maxx ended up looking a little worse for wear after a few weeks of challenging the quarry, so much so, that we thought a refit was in order. While performing some regular maintenance tasks, we also figured we’d install a few more performance parts to help up the Maxx’s capabilities. 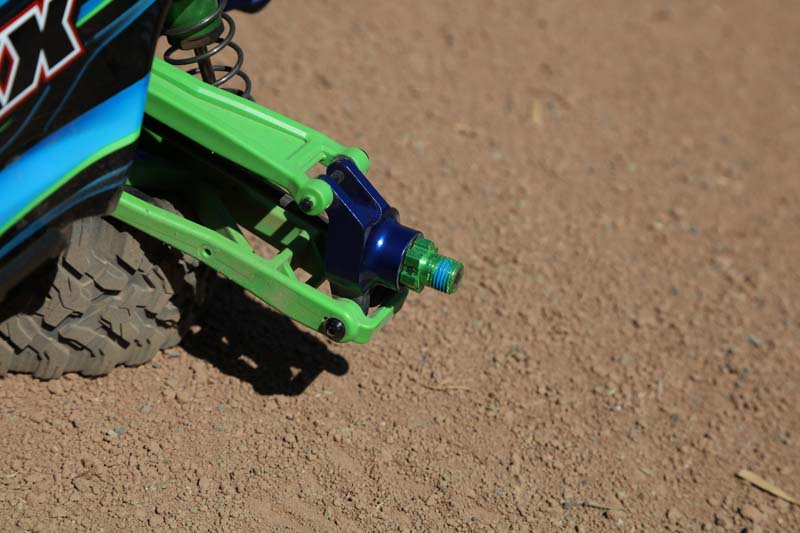 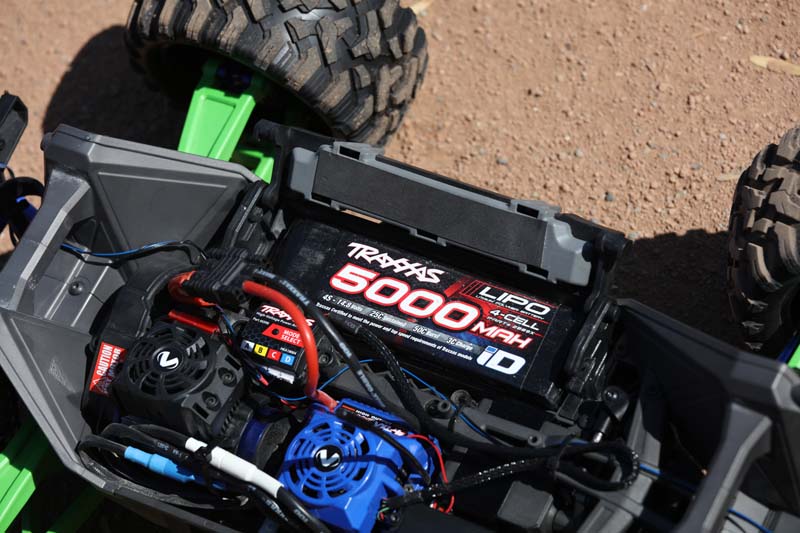 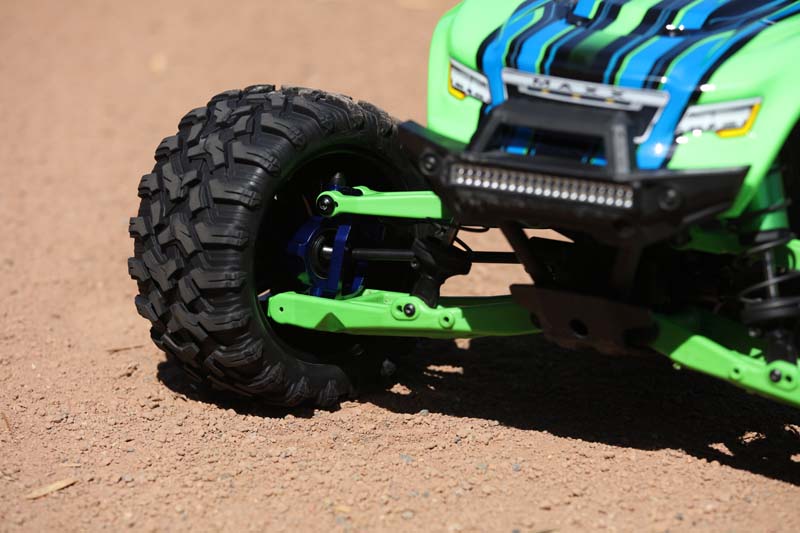 UPGRADE TIME
We ordered up a host of Traxxas upgrades including WideMaxx specific steel CV drive shafts. These all-steel drive shafts replace the stock plastic shafts and are made to shrug off even the harshest of trails. A new set of bearings comes with the set to accommodate the more robust shafts. We also went in and replaced the stock differential with Traxxas’ optional metal encased center differential kit. This upgrade is one more piece to make the Maxx even more bulletproof.

While we had the shafts off, we also installed aluminum splined hubs as well as aluminum wheel nuts. The front steering and caster blocks and the stub axle carriers in the rear we replaced with aluminum versions as well. Each of these aluminum upgrades provide strength while managing to still be light in weight. Added strength at little or no weight cost leads to performance and reliability benefits.
In order to help confidently plow through a sea of jagged rocks, we also swapped out the stock plastic toe links for much stronger 7075-T6 aluminum TUBES toe link upgrades. The toe links’ hollow tube design maximizes stiffness and resists bending, while reducing weight, which all lead to undeterred steering under even the most stress inducing of terrain.

The TUBES toe links are coupled with a Traxxas 2085X servo. The 2085X servo includes full metal gears and adds a massive amounts of torque over the stock servo. It’s so robust that it was originally offered as an upgrade to the much larger X-Maxx monster truck. It also includes a steel steering linkage for increased precision and control during high speed driving. We also attached an optional metal servo horn to complete the set.

Last but not least, we completed our upgrades with a brand new, unscathed body and a set of brand new wheels and tires. You might ask what’s the point of a new body when surfing rocks at the quarry, but we still like our truck to look pretty too. This shiny body comes factory painted, stickered up, complete and ready to mount. It will sit on the Maxx when it’s on the shelf in-between runs. When it heads to the quarry again, it’ll don the battle-scarred it originally came with. The blue trimmed wheels look great on the green machine. Its tires come pre-glued from the factory, which is a nice touch. 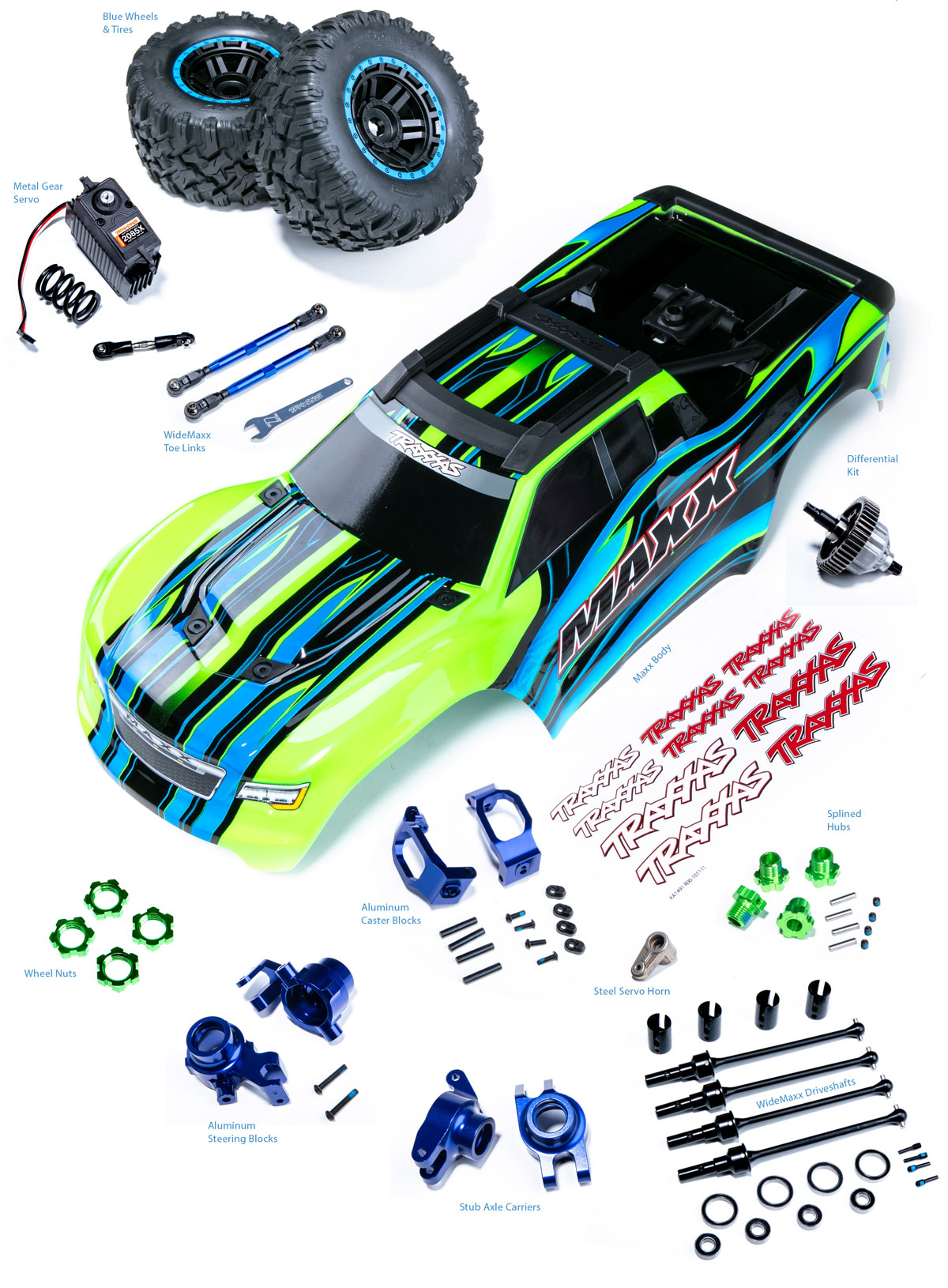 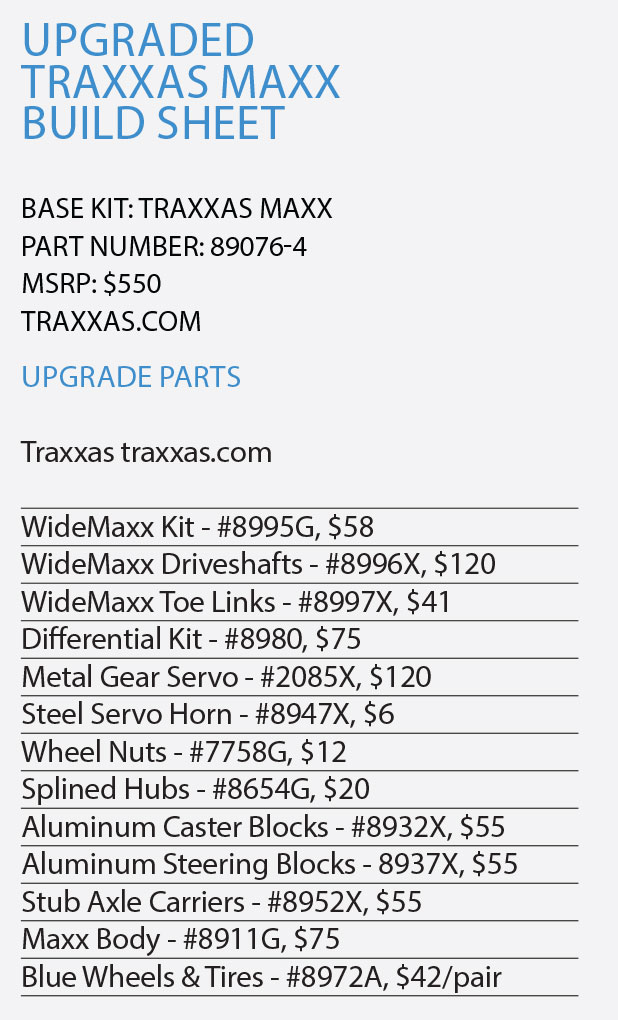 DRIVING IMPRESSIONS
We took our newly upgraded Maxx to the park to ease it in. We noticed that the new diff made a lot more noise than the stock one, which was pretty much silent. The noise isn’t bad; it’s only noticeable during low speeds. It gives is a tough, mechanical sound.

We also noticed that the WideMaxx all-steel CV drive shafts seem to make the truck respond more precisely and quicker under both acceleration and breaking too. We like knowing that the thick metal shafts are driving the truck at the high speeds that we demand of it.

Its hard to tell if there’s a driving difference with the aluminum parts such as the steering and caster blocks and stub axel carriers, but we’re sure that the upgrades will pay off over time. What we could tell was the upgraded high torque 2085X steering servo along with the aluminum TUBES toe links did provide stronger and quicker steering response over the stock units they replaced. 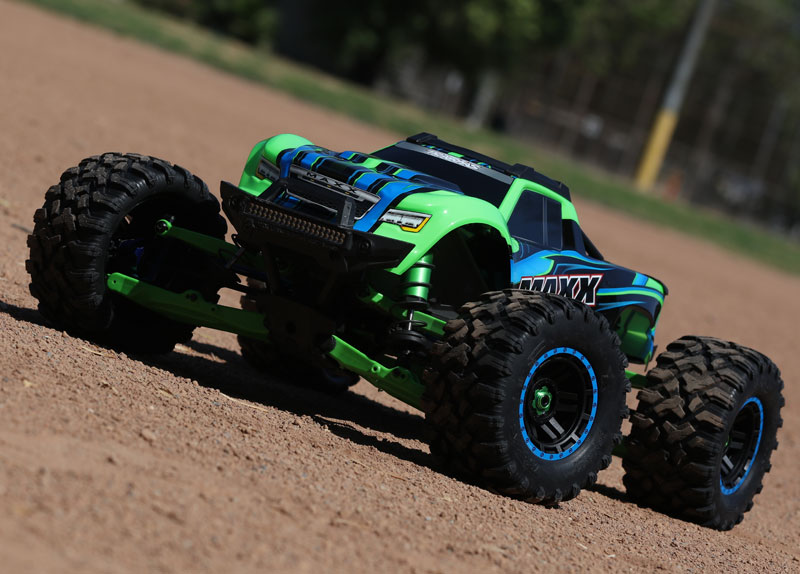 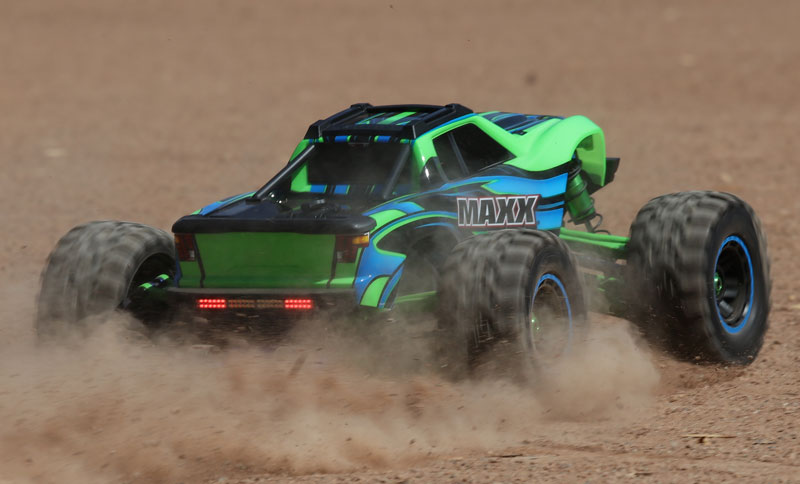 With the upgrades completed, we’re excited to take the Maxx out to the rock quarry for a second stint of rock crushing work. We’re confident that the upgrades will only increase the fun factor of the Maxx to another level; which is hard to imagine since everyone who gets a chance to drive it gets the biggest smile slapped on their faces. We can’t wait!