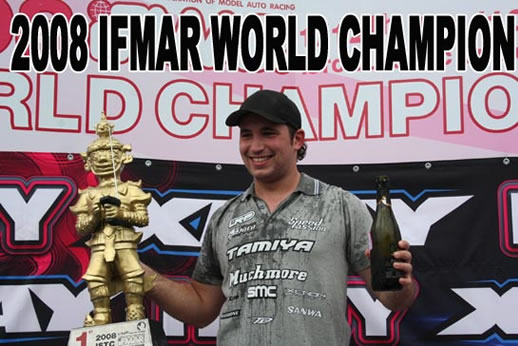 On November 16th, 2008 Marc Rheinard once again became known as the best electric touring car driver in the world! This is Marc’s second IFMAR World Championship (2004 & 2008) and the third Touring Car world title for Tamiya (2002, 2004, and 2008). The race was anything but an easy win. After Hot Bodies driver, Atsushi Hara, won four of the six qualifying rounds the audience could tell it would be a heated battle between the two former World Champions, Rheinard and Hara. Hara’s dominance in qualifying made him the favorite to take the title in the main events. On the third lap of the first main, Hara and Rheinard accidentally touched, granting Masami Hirosaka the first win of the triple A Main IFMAR format. Hara took the win in the second Main rather decisively, while Rheinard appeared to have accepted defeat. However, by the third and final Main, it was still anybodies game. Five of the ten drivers were still eligible to win the world title! The third and final main event would crown the 2008 world champion. The final main event was an example of “one of the greatest display’s of RC driving” ever. Hara, with Rheinard closely behind, sped with perfection around the track. Ultimately, it was Marc Rheinard who came up on top after key passing action on the track. For those who were there, it proved to be quite the driving clinic.

These results and Tamiya’s commitment to its racing promotional program once again prove their dominance in the hobby world. As one of the largest hobby manufactures, Tamiya has been involved in many aspects of the ground radio control spectrum. From beginner RC Cars to the most advanced state of the art race vehicles, Tamiya is always striving to be the best and will be continuing to bring the best hobby products to hobby stores world wide for many decades to come.