The Tamiya MudMad is one of those vehicles that give us fits trying to describe to you guys. On the one hand, it is deceptively simple in concept. Just looking at the whimsically styled tiny 4x4with its super short wheelbase and oversized tires gives you a pretty good expectation of what it’s made to do. But what may not be apparent in the looks is how it executes that concept—all the little touches in the design that maximize the fun factor and make it hugely entertaining to drive in a variety of environments.

We first saw the SW-01 chassis a while back on the Lunch Box Mini, and like that miniaturized version of Tamiya’s classic van, this MudMad is made for wheelies—the short wheelbase, the high center of gravity, and the torquey drive system make wheelstands a pull of the throttle trigger away at any time. But that’s not to say the MudMad is a one-trick pony.

If Tamiya had just wanted to make a simple wheelie-popping mini they could have made it rear-drive and been done with it, but they didn’t do that. Instead, they engineered a fun little 4×4 that can bump, jump, and scramble its way through a variety of stunt maneuvers. Let’s take a look at how they managed it. 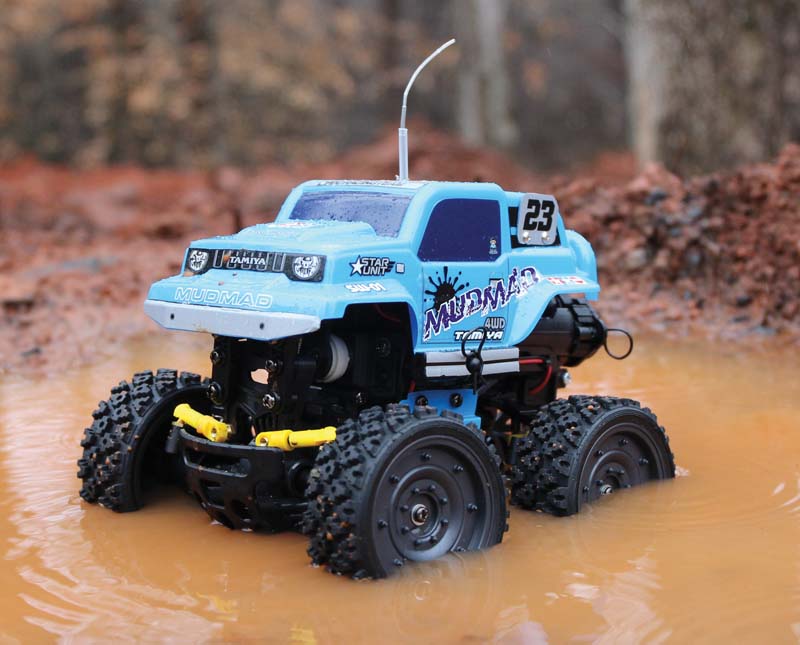 Power comes from a 370-size motor mounted transversely and low in the chassis, halfway between the front and rear axles. The drivetrain is entirely gear-driven, which is made possible by a wheelbase that is just 92mm. The gear drive leads to planetary gear differentials front and rear, spinning axle shafts equipped with universal joints. The stock gear ratio is quoted at a short 21.88:1, helping to yank those front tires off the ground on demand, but there is an optional pinion gear available that trades a little of that low-end grunt for a higher top speed.

There is also an optional ball bearing kit to replace the stock kit’s bushings—a worthwhile upgrade whether you are running the stock or optional gearing, and something you probably want to install when you’re building the kit for the first time, as the drivetrain is buried in the center of the monocoque chassis and might require nearly a full teardown to get to later. You will need to supply your own 7.2-7.4V battery and a speed control compatible with your chosen pack. Tamiya also offers an optional battery case allowing you to power the MudMad with four AA batteries if desired. 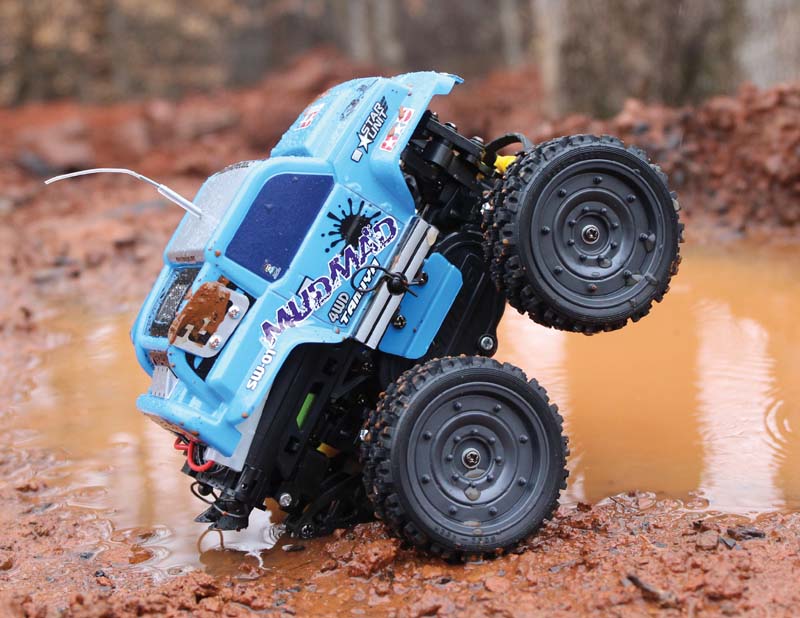 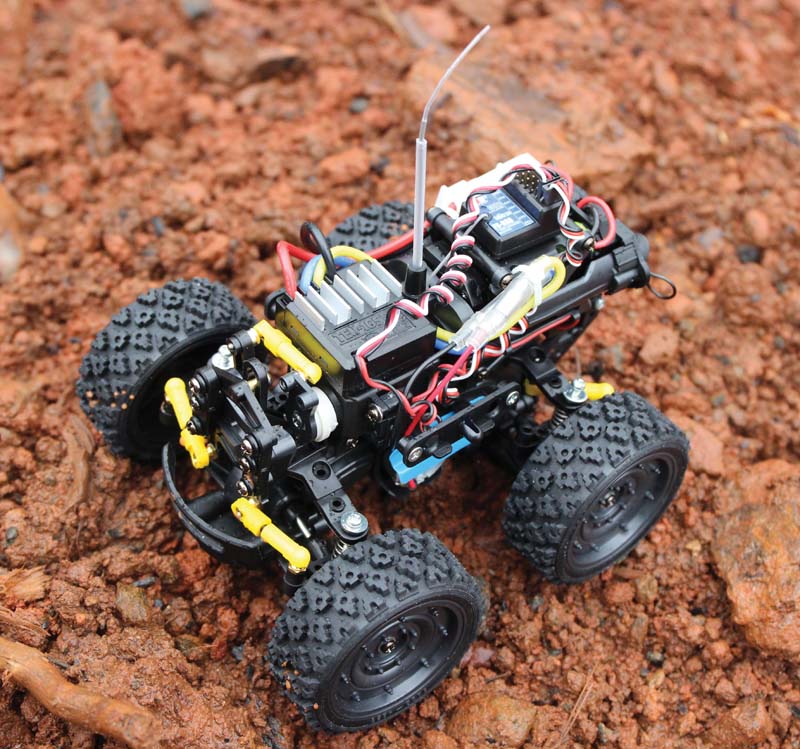 One of the challenges with a small vehicle with a high CG like the MudMad is keeping it from tumbling over in turns. Tamiya has come up with an innovative solution for the SW-01 chassis that involves mingling the steering action with the ride angle. As the steering bell crank system turns, it leans the front suspension into the turn, using the suspension geometry to counteract the tendency for the body to lean or roll to the outside.

Tamiya calls the suspension system a modified MacPherson strut system, and while that might be a slight stretch, it does share a lot in common with a compact strut setup like you find on your street car. There’s a pretty standard lower control arm and an oversized steering knuckle with an integrated friction damper built into the top of it, (the “strut”). An upper control arm connects the top of the damper back to the chassis and the bright yellow steering arms connect to the bell crank system that pivots the entire suspension of the inside tire upward, but it does so without compressing the spring so you retain suspension travel mid-turn. Very clever!

Another ingenious bit of engineering is optional supplemental fore/aft upper steering arm connectors that give the MudMad 4-wheel steering action. This is particularly useful when popping wheelies because it gives you steering control even when you’re up on two wheels! And the steering system utilizes a standard-size servo, which helps both durability and convenience. 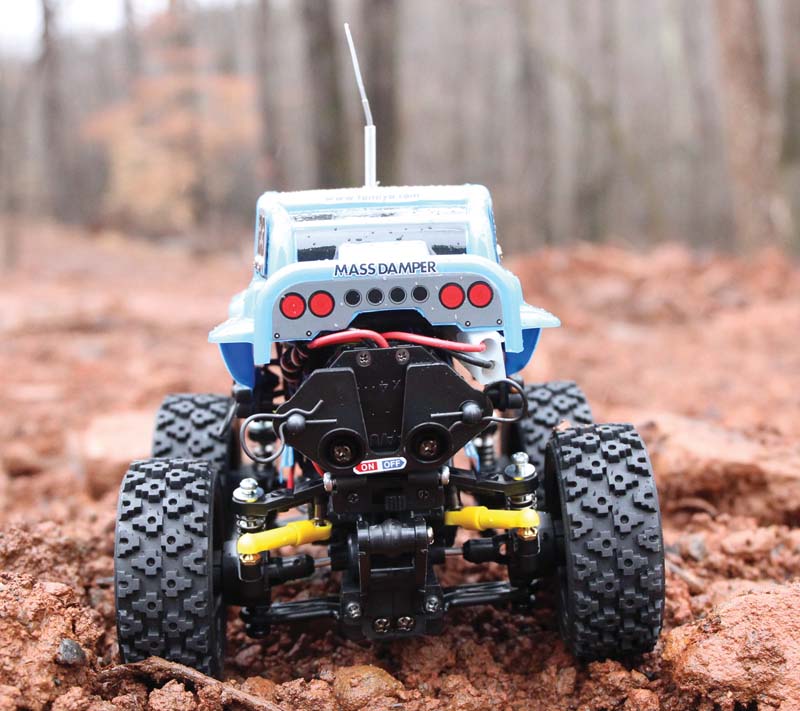 The battery is accessed through the rear of the MudMan so body removal is not necessary when changing it out.

The MudMad is all about lighthearted fun and the styling certainly communicates that, although the design does have some purpose behind it, starting with the attachment method. The pre-painted body is held fast with magnetic retainers and then reinforced with body clips along the rocker panels and the open-backed body allows swapping of the rear-mounted battery without removing the body, (depending on the length of your battery connector leads.)

Unlike the squarish Lunchbox that was first to receive the SW-01 chassis, the three-box MudMad is more rounded, actually allowing it to perform somersaults and roll back onto its wheels in many cases. The 70mm tires dominate the MudMad’s profile, and while they have a moderately aggressive off-road tread pattern I think the “Mud” in the MudMad’s name is a bit optimistic. It can certainly bumble happily over dirt and small obstacles though, and the integrated skid plate/front bumper protects the steering system from collisions.

Even though it has decidedly off-road looks, it’s worth noting that MudMad delivers a much better driving experience when its rolling on flatter, obstruction free surfaces such as dirt, shallow mud puddles, concrete, wood, even on the carpet of your living room floor. Due to its small size and high center of gravity, we found that it’s not well suited for traversing through tall grass and over large rocks. 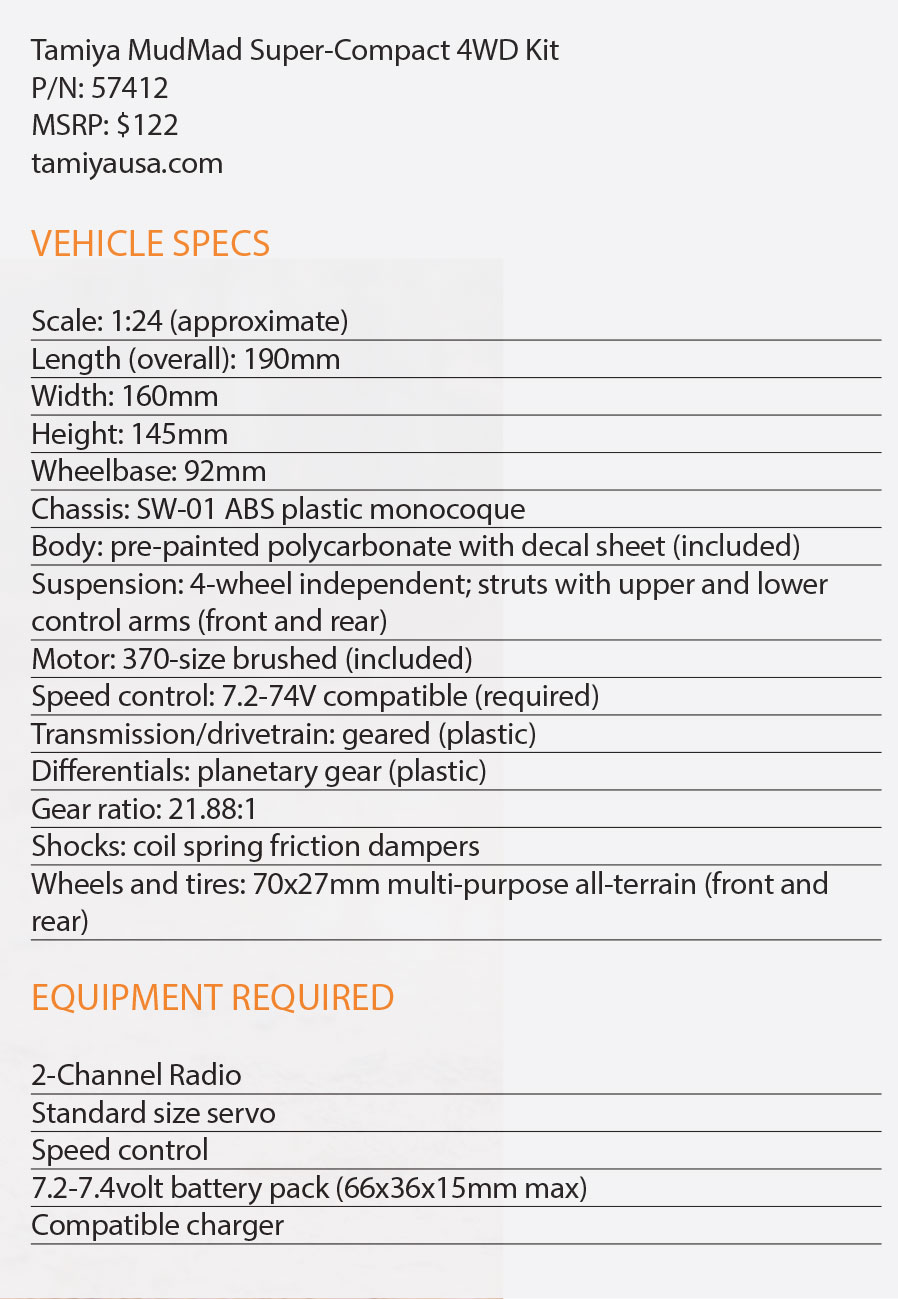 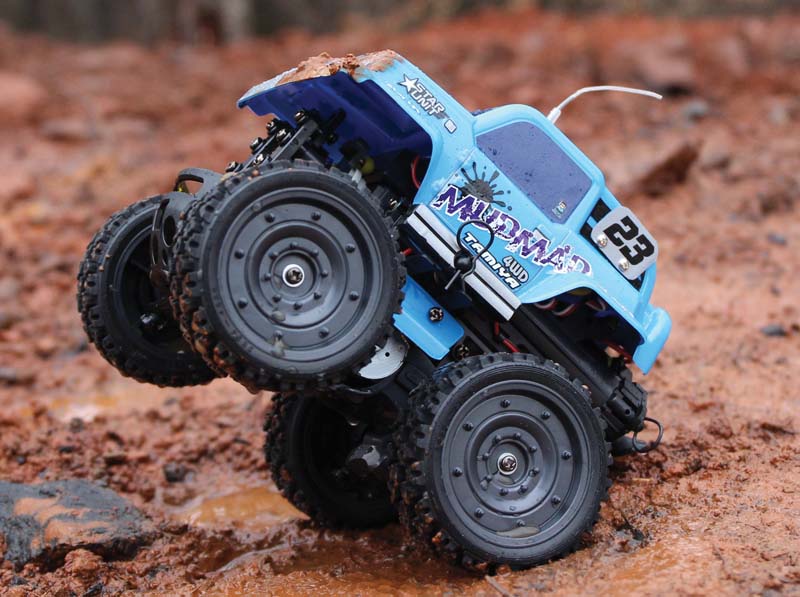 If you glanced quickly at the MudMad and didn’t take time to look at the clever engineering that went into it, it might be easy to dismiss it as a single-purpose novelty RC vehicle. But that sells short the stumpy little soft-roader. Yes, it looks rather comical. Yes, it is designed to pop wheelies at will. But it’s also a zippy little runabout that can do other things and can provide smiles to beginners and experienced RCers alike. And it’s a kit, so there’s the added enjoyment of assembling one of Tamiya’s beautifully engineered kits along the way. It would be a great first build for an aspiring young hobbyist.