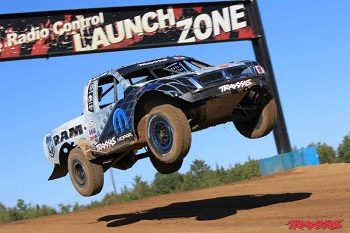 Labor Day Weekend means short-course racing at Crandon! The Traxxas TORC Series took over the small town of Crandon, Wisconsin this past weekend and the population ballooned from under 2,000 to over 30,000 off-road racing fans. The schedule was action-packed, with pro races Friday, Saturday, and Sunday. The Traxxas/Jenkins Brothers Racing team was out in full force bringing eight drivers, nine trucks, and one buggy.

When TORC last visited Crandon back in June, Mother Nature was a factor and Round 5 was partially rained out. Consequently, both PRO 2wd and PRO 4×4 ran makeup races on Friday. In both there was an unusual lack of JBR drivers on the podium, but Rob MacCachren hustled his Ram/MOPAR to an Oakley Bomb fastest-lap award. Other stand out performances were turned in by both Mark and Mike Jenkins, who were able to lock down fourth and fifth place finishes in PRO 4.

Saturday’s Pro racing began with PRO Buggy, where Traxxas’ Mitchell DeJong was favored to win. But a jumped start resulted in DeJong receiving a black flag and a stop and go penalty. That put him at the back of the pack. And that’s where just about any other PRO Buggy driver would have finished. But that wasn’t DeJong’s plan. He thrilled the crowd by methodically passing car after car, putting on a driving clinic. DeJong came through nearly the entire field, ultimately finishing in second place. Even better, that second place was enough to crown 14 year-old Mitchell DeJong the 2012 TORC PRO Buggy class champion!

In PRO Light, Traxxas stacked the deck by running four drivers. Luke Johnson and Keegan Kincaid battled each other hard to earn second and third place finishes. Andrew Caddell had high hopes for the race but was mired in seventh. Mitchell DeJong jumped out of his PRO Buggy to give PRO Light a try, and brought his Traxxas/JBR truck home in 16th.

In the PRO 2wd, Rob MacCachren continued his pursuit of win number 200. But it wasn’t to be, as a mechanical issue kept him from the podium. It didn’t keep him from securing yet another fastest lap award though. Mike Jenkins and Jeff Kincaid both kept their trucks in the top ten.

PRO 4×4, Traxxas driver Mark Jenkins raced the #25 truck to a solid 3rd place, followed closely by brother and teammate Mike Jenkins in 4th. Mark has been on fire lately, and is looking forward to tearing it up in California!

On Sunday, the running order was stirred to allow the PRO 2 and PRO 4 teams some extra time to prep for the running of the Amsoil Cup that afternoon. In PRO 4, Mark Jenkins continued his string of strong finishes with a 4th place, while Mike Jenkins took 6th.

In PRO 2wd, history was made. Rob MacCachren, the winningest off-road racer ever, logged his 200th victory. And it didn’t come easy. Throughout nearly the entire race MacCachren was held up behind an obviously slower CJ Greaves, with Robby Gordon pressuring from behind. But it all came together in the end. MacCachren tried some unique lines and completed the passes to land him in 1st place and in the history books.

The Traxxas TORC Series will finish out the 2012 season at the Antelope Valley Fairgrounds in Lancaster, California on September 29-30. On the bill will be the Rick Huseman Cup, the Traxxas Cup, and a full schedule of fender-crunching short course dirt racing. Just an hour from Los Angeles, the track promises big air and monster moguls. Mark your calendars and BE THERE.