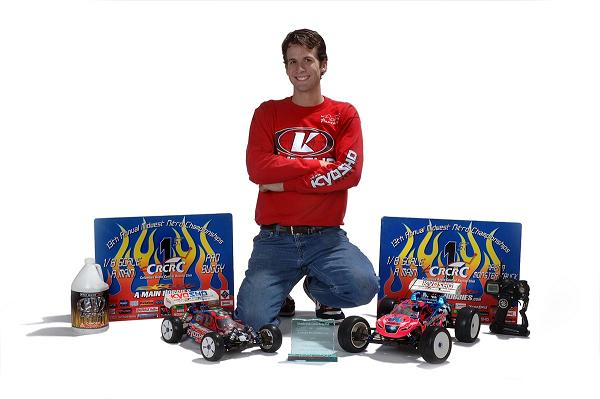 Thursday, January 24, 2008 – Kyosho driver Ryan Lutz drove his Sirio-powered Inferno 777 WC buggy and Inferno ST-RR truck to wins in their respective classes during the 13th Annual Midwest Nitro Champs at the popular CRCRC (Columbus Radio Control Car Club) facility over the weekend of Jan. 20th. The nitro portion of the competition closed out two full weekends of racing that began the week prior with electric racing in an event that draws the most talented racers from all the major factory teams. Lutz TQ’ed the truggy class and, even with two lengthy pit stops to repair some body damage, led the last 60 laps of the main to take a decisive victory.

Lutz qualified sixth for the 1:8 buggy main, which meant he had a tough task ahead if he hoped to sweep both 1:8 classes. A superior driving performance and the durability of the Inferno 777 WC were showcased in the final, allowing Lutz to pull to the front of the pack. An unfortunate flameout in the latter stages of race erased a comfortable half-lap lead and put Lutz nearly a full lap down to Mayfield. Once back on the track, Lutz bumped his pace to more than a full second a lap faster over the next 30 laps, closing an entire lap on Mayfield and making the inevitable pass to take the victory, completing the sweep of both classes.