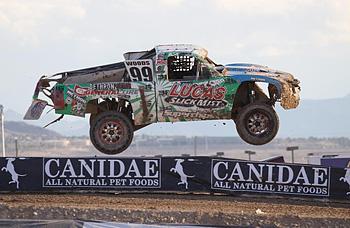 The 2011 Lucas Oil Off Road Racing Series comes to an end Firebird Raceway in Phoenix, Arizona this weekend!

As the year heads quickly to a close, so does the 2011 Lucas Oil Off Road Racing Series (LOORRS) season, but fortunately you will have one more opportunity this weekend to witness the greatest show on dirt!

The LOORRS will make its final 2011 appearance this weekend at the Firebird Raceway in Phoenix, Arizona. Saturday will see round 15, the final round of the LOORRS. With the LOORRS championships still yet to be determined you can expect to see hard racing and high drama out on the dirt as every racer tries to grab every point they can before it’s all over.

On the following Sunday the 2011 Lucas Oil Challenge Cup race will be run. With all the LOORRS points awarded and championships won, the 2011 Lucas Oil Challenge Cup race is for cold hard cash! Over $100,000 of prize money is up for grabs in the this race and the teams have until March to repair the damage. With nothing to lose and all that money on the line expect to see some the most intense flat-out racing you have ever seen!

If you’re one of the lucky ones at the race this weekend, be sure to stop by the Team Associated booth to check out the R/C demos and all the trucks on display. You might even get to see some of the LOORRS pro racers putting in some hot laps with their SC10s and signing autographs! Team Associated is proud to be the “Official R/C Car of the Lucas Oil Off Road Racing Series” for 2011. This is our third year in supporting LOORRS, and needless to say, we are very stoked about it!

If you are not in the Phoenix area or unable to make it out to the race this weekend, don’t worry, you can watch the LOORRS on a TV near you! For a full race and TV schedule click on the link below.

For information on the Lucas Oil Off Road Race Series please click on the link – and we’ll seeing you at the races!