Kenny Brosh has a knack for turning out great races and great series’. With both of his KBRL series in full swing it was time for round 2 of the nitro series to hit Tucson AZ. With another great turn out it would seem to show the KBRL is very well supported by Arizona’s electric and nitro racers alike.

KBRL Nitro Round 2 started off with a bang for LOSI / Novarossi driver Casey Peck as he claimed the first round TQ with fellow Losi team mates; Charles Hicks, Chris Wheeler, and Trevor Clement, in tow. Peck’s first round time would hold and he would claim the overall Tq with his Losi team mates making up 4 of the top 5 spots.

When the tone sounded Peck and his 2.0 buggy picked up where they left off in qualifying and never looked back. The Nitrotane fueled buggy couldn’t be shaken and Casey took the 20 min main win by a lap over the field. Mike Friery, and Trevor Clement had a great race that would eventually end with Trevor in second and Mike third. Casey chose the Losi Kingpin G2 in green compound for the perfect balance of speed and tire wear.

E buggy looked the same, this time with Gabe Zarate, Scott Swaggerty, and Danny Levit filled up the Losi podium.

And finally the Novice class with Keith Kittrell and his Losi 8 2.0 and Sabrina Kilday with her 8T 2.0.

Round 3 of the nitro series will visit the world famous Nitro Pit on December 4th.

Good luck to all of the Losi drivers in the rest of the series! 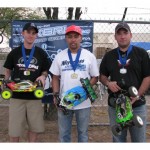 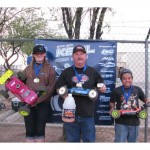 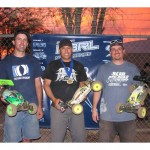