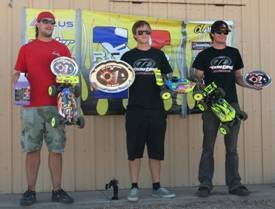 Team Losi Racing drivers Dustin Evans and Matt Chambers attended the final round of the RC Pro Series Mountain Division. Through qualifying Dustin was on his game and took the overall TQ spot for the main with Matt startng 2nd. The main event would prove to be an interesting battle between the two Losi teammates.

At the start Dustin led with Matt in 2nd until a mistake coming on the staightaway allowed Matt to take over the lead. Matt and Dustin stayed close thruogh the first pit stop with Matt leading until he ran out of fuel just before the second fuel stop. This allowed Dustin a comfortable 2 lap lead over Matt who held onto 2nd despite the problem. With 15 minutes to go, Dustin had a problem with a front tire and had to come into the pits for a replacement. This allowed Matt to make up valuable time and get back to within 5 seconds of Dustin. A few small bobbles allowed Matt to take over the lead until a shorter fuel strategy had him pit an extra time. Dustin would cross the finish line first with Matt in second about 10 seconds back and another Losi driven by Chris Peralta rounding out the podium in 3rd.

Congrats are in order for Chris Peralta who took the overall win in Expert Buggy and Expert Truggy for the RC Pro Series Mountain Division!