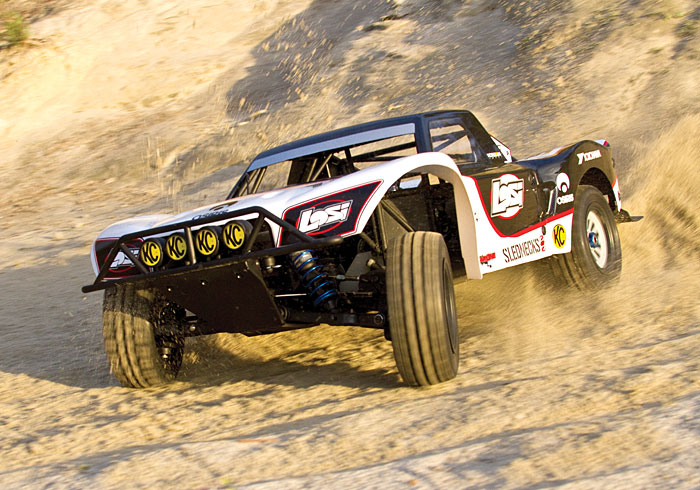 It’s a good thing I’m an adult now with a full-time job and income. If the Losi FIVE-T had been released 20 years ago, back when I started in RC, I would have spent every waking moment working any odd job on the planet to save up for this truck. Washing dishes, mowing lawns and walking dogs would all have been fair game. After spending several weeks with the FIVE-T, I can say that there’s no job too small to save for this behemoth. Sell a kidney if you need to. Forty-five-minute run times, incredible scale realism and a “wow!” factor exceeded only by Lady Gaga on her craziest awards night are all included in the FIVE-T box. Sure, this truck will set you back $1,599, but when’s the last time you smiled so hard your face hurt?

PERFORMANCE
After mixing up a gallon batch of 91-octane gasoline and the included Losi oil premix, I proceeded to bash the FIVE-T into oblivion. First, let’s get some numbers out of the way. This truck weighs over 35 pounds. At top speed, it travels over 30mph. With a full fuel tank, the FIVE-T will run uninterrupted for 45 minutes. And a single gallon of gas, which sets you back all of $3.80 at press time, lasted me nearly five full tanks … which translates into nearly four full hours of run time. Holy crap.
Out in the open in a large park/industrial complex where we tested, the FIVE-T is most at home rip snorting its way over any terrain you can imagine. From jumps to ruts to large swaths of grass and knee-high brush, the FIVE-T takes the abuse and keeps on smiling. For those of you who’ve driven a 1/5-scale vehicle before, prepare to be wowed by the Losi’s 4-wheel drive traction. No pendulum-like spin outs, just traction everywhere. Punch the throttle from a standstill, and all four tires spray dirt and rocks like a four-year old spraying Silly String at Chuck-E-Cheese. If you have any doubts about the 26cc gas engine’s power, they will be quickly forgotten after 30 seconds with this truck. The engine’s slightly droning “Bwaaaaaa” weedeater exhaust note at full throttle means no one within earshot will mistake this truck for a nitro vehicle.
So, what’s it like to rip around motocross tracks and wide open fields with the FIVE-T? Everything you think it would be, plus some. Check out the action video on RCCarAction.com to get the full effect. During our test sessions, photographer John Cary and I spent tank after tank laughing in amazement. Each time the FIVE-T performed another act of mondo-sized magic, we would stop, laugh, and high-five each other as though we had never seen an RC car run in our lives. Those of you accustomed to the twitchy, reactive handling of a 1/10-scale electric or 1/8-scale nitro buggy will probably feel that everything this truck does seems to happen in slow motion. A 1/16-scale micro car speeding along at 30mph looks like it’s traveling at 100mph, but a 965mm long, 35-pound 1/5-scale kinda looks like it’s in slow motion. Don’t be fooled; this behemoth moves quickly and can injure you or any bystander if you’re not careful. Finally, I’ve read some people on the Internet complain about the truck’s price. Fill an online shopping cart with all of the items needed to complete a 1/8-scale racing buggy, and compare prices. Then, consider that you get nine minutes of run time instead of 45, and you’ll smoke $60 sets of tires faster than Willie Nelson smokes “cigarettes.” When run time, power, speed, scale realism and wow-factor count, the FIVE-T scores huge points.

VERDICT
It’s not often that a $1,600 price tag is considered a bargain, but after bashing the FIVE –T for extended time periods, I’m left with that conclusion. What other vehicles idle all day from the first tank of fuel, provide all-wheel-drive traction, huge performance and even bigger scale realism all in one package? Having enjoyed RC for nearly three decades, I’m rarely surprised by an RC vehicle anymore. And yet, the FIVE-T’s entertainment value surprises me each time I drive it. Right now, there isn’t anything on the market that can compare to it. How do you place a price tag on that?