Jumping is a blast—if you have a good jump. You can hammer together a ramp out of plywood or prop up a board with bricks, but these are hardly convenient or easily portable solutions. There’s a better way: ramp maker LandWave offers stackable, molded ramps that make it easy to customize your launch pad. The system makes it easy to build jumps as wide and tall as you like, without tools. Here’s what you get and how it works. 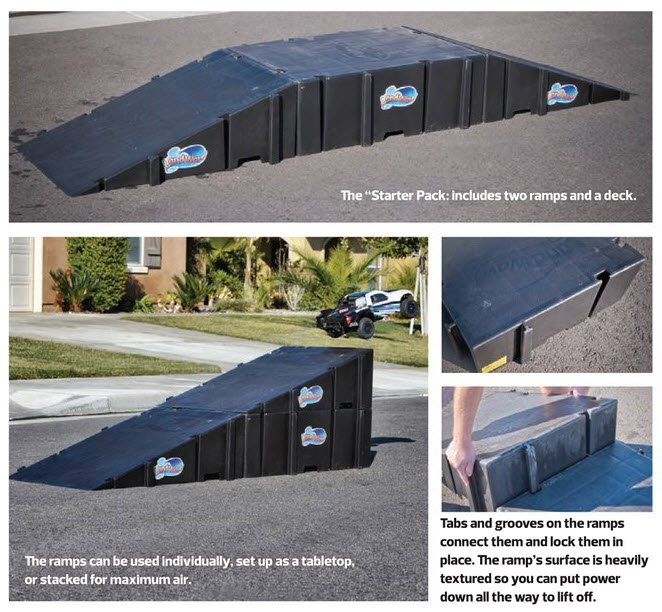 What You Get
There are two parts to the system: the ramp, and the deck, which is essentially a flat box and makes the stacking feature possible. Tabs and grooves align to connect the ramp and deck and rubber feet make sure they don’t slip, and the ramps and decks can be assembled side-by-side as well as stacked to make jumps wider, taller, or both. The jump and deck each measure 28 x 38.5 x 12”, so they are large enough to have fun but not so big that they take up too much space when storing them. Or, just leave them outside since they’re weatherproof plastic. 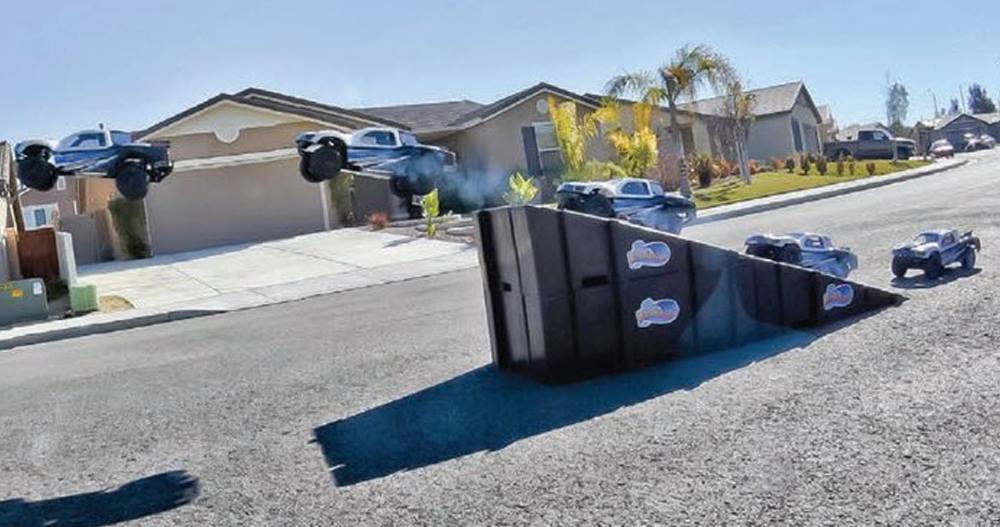 Getting Air
I did my testing with the LandWave starter pack, which consists of two ramps and a deck. I had no trouble connecting the pieces to make a double-wide ramp, a table top and a double-tall ramp. Disconnecting the parts required a little shaking to break them loose, but it was no problem. A single ramp by itself is wide enough for 1/10 and 1/8 scale cars, but it’s definitely easier to line up on a double-wide jump. With the LandWave system, there’s no gap between the jumps when you fit them together side by side—the same can’t be said for other molded ramps I’ve tried. I also found the LandWave jump’s textured surface allowed good traction all the way up the ramp. LandWave’s heavier, sturdier construction also helps the ramps stay in place instead of moving when you hit them.

Overall, I had plenty of fun with the LandWave jumps. They locked together well and didn’t move during my jumping sessions, and I really like that you can build a ramp as wide or as tall as you want by adding more ramps and decks–you definitely can’t do that with plywood and 2X4s. The LandWave system offers superior made-in-USA construction and much greater versatility than department store ramps, yet surprisingly costs less. A two-pack of similar-sized (but less rugged) ramps at WalMart.com sells for $134. For $125, LandWave’s Starter System includes two ramps plus a deck, puts a better ramp system in your driveway, and leaves an extra $11 in your wallet.