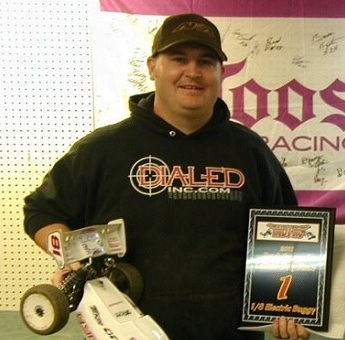 “I was ready to go for the e buggy class. I knew a few new guys had made the switch from Nitro to electric and had gotten really fast the the 1/8 buggy class was going to be a fast and hard class to win. I ran a couple packs in practice to get ready for the quals. My car was good right from the get go so I just left it alone. The first qual started really well and I was flying and on a TQ pace when it all started to go south. I got into traffic and started making a lot of mistakes and that drooped me down off of TQ pace. I ended up 3rd for the round so I was pretty happy with that. The 2nd round of quals started and after the shuffle I was in the A qualifier. The qual started off bad and right from the start i was making stupid mistakes again and was having some troubles. I got the car rolling mid way through the qual and was clicking off fast laps and making up a lot of time but it was to late for the qual. I ended up 4th for the round and that is where I would start on the grid for the final. The A main got off to a good start and everybody was able to get away clean. Fellow OFNA team driver Brian Bourland had jumped out to an early lead and I had settled into 2nd. Bourland was setting a fast pace and I was pushing really hard to catch up to him. I was making up a little time and he got into traffic and had a few issues and made a few mistakes to let me catch up. I finally got to him and ran right behind him for about 4 laps putting pressure on him hoping he would make a mistake. In one section of tha track I was a li ttle faster then he was and I put a lot of pressure on him and he let me go. I got to the lead and he stayed right with me pacing me the whole way. We got to lap traffic once again and I was able to get through it clean but Bourland got hung up with a lapper and that gave me the advantage I needed to pull away and take the win. I was super pumped with the results after being off the pace in quals and coming back and winning the A main.”