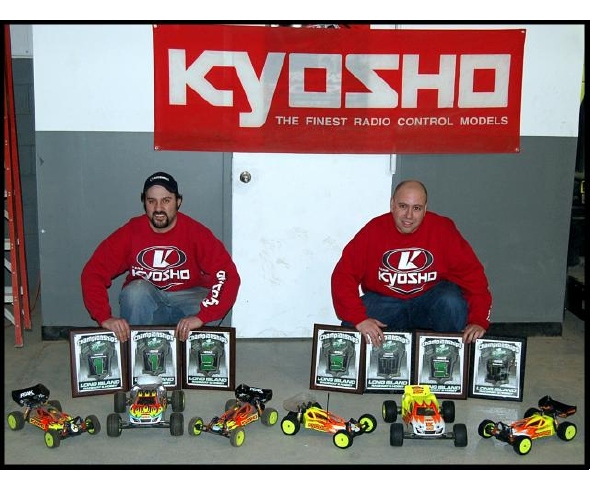 The ROAR Region 1 championship was held at LIR last weekend, on the 6th and 7th of March. The even had a great turnout and Kyosho cars dominated this event!

Andrew Parente was able to TQ in mod truck going on 21 laps in round 2. It was the only 21 lap run of the weekend in the truck class. At the tone Parente made a bobble that allowed Rob Betts and James Schlick to get past. The three of them set off on a six minute battle where they ran nose to tail for most of the race. In the end, Rob Betts came home with the wind and the championship! James finished second and Andrew finished third. The three of them crossed the line within 1.2 seconds of each other, giving Team Kyosho 1, 2, 3 win.

Mod 4WD was another class that Parente was able to TQ. Andrew fell back early but was able to work his way back up through the field to finish 5th. Rob Betts came home for the wind with a local fast kid named Tom Shields in 2nd. Tom had led a good portion of the race but had a run in with lap traffic on the 2nd to the last lap that cost him the race. Tom was also driving a Lazer ZX5 FS and runs all Kyosho cars. In third place was another local named Steve Plackis. So at the end of the day it was an FS with TQ, 1st and 2nd and a SP in 3rd.

A Kyosho also won and finished 3rd in the 13.5 buggy class and new Ultima SC finished 2nd and 3rd in the SC class. All in all, it was a fantastic weekend for Andrew, Rob and all Kyosho cars at LIR.