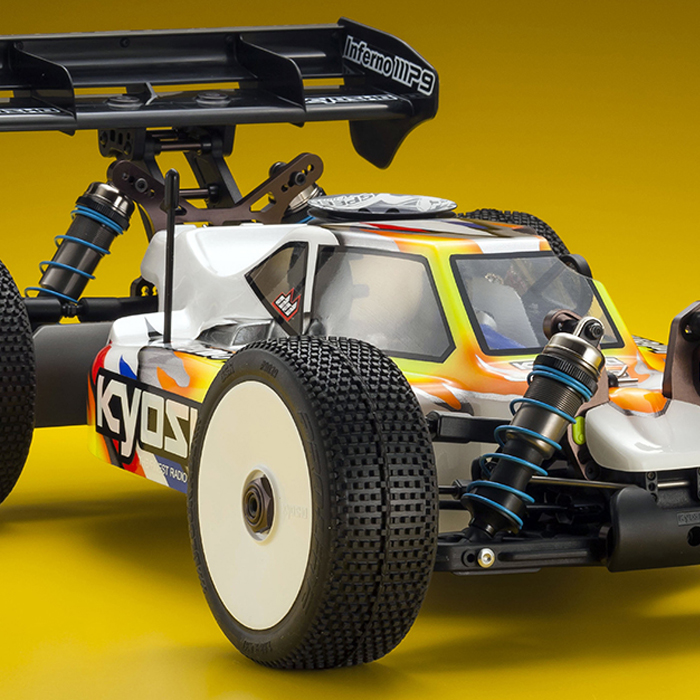 Kyosho has announced all the tech details for the new TK14 (see below), plus plenty of detail shots. Click to enlarge, and see the full gallery after the write-up. 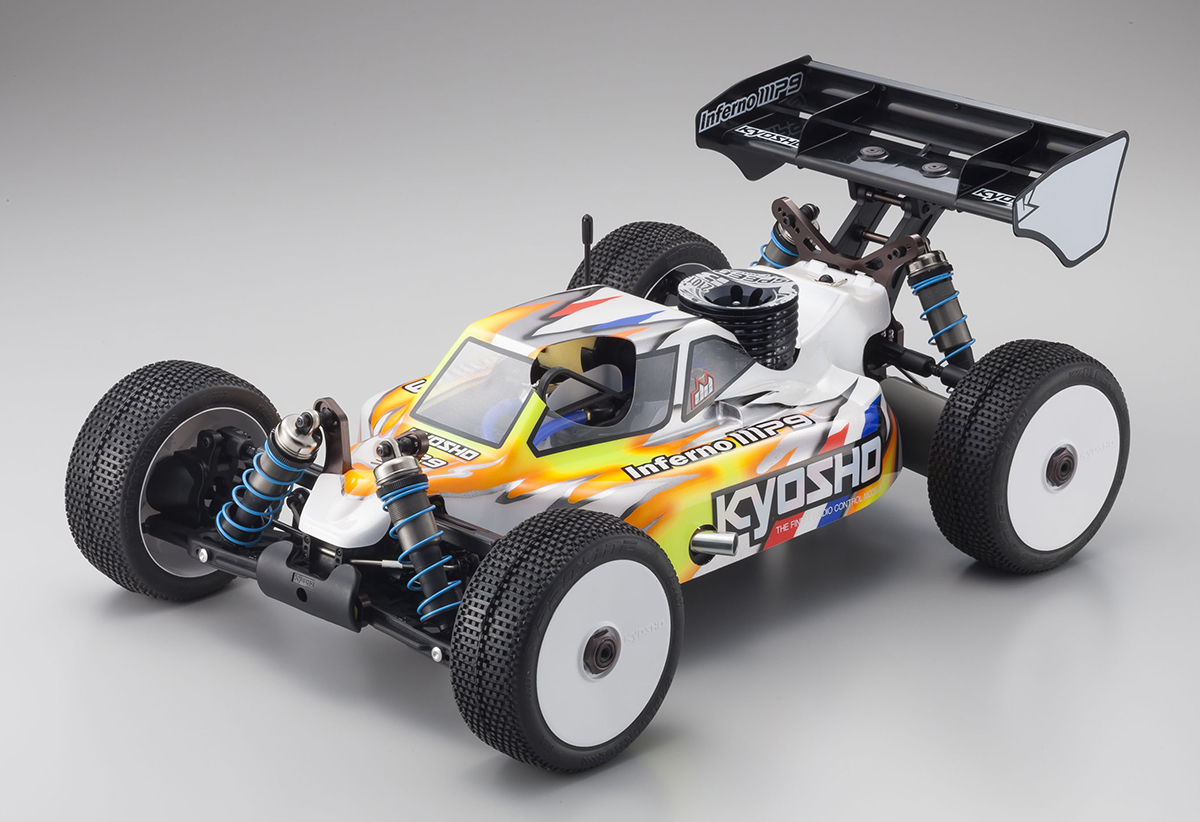 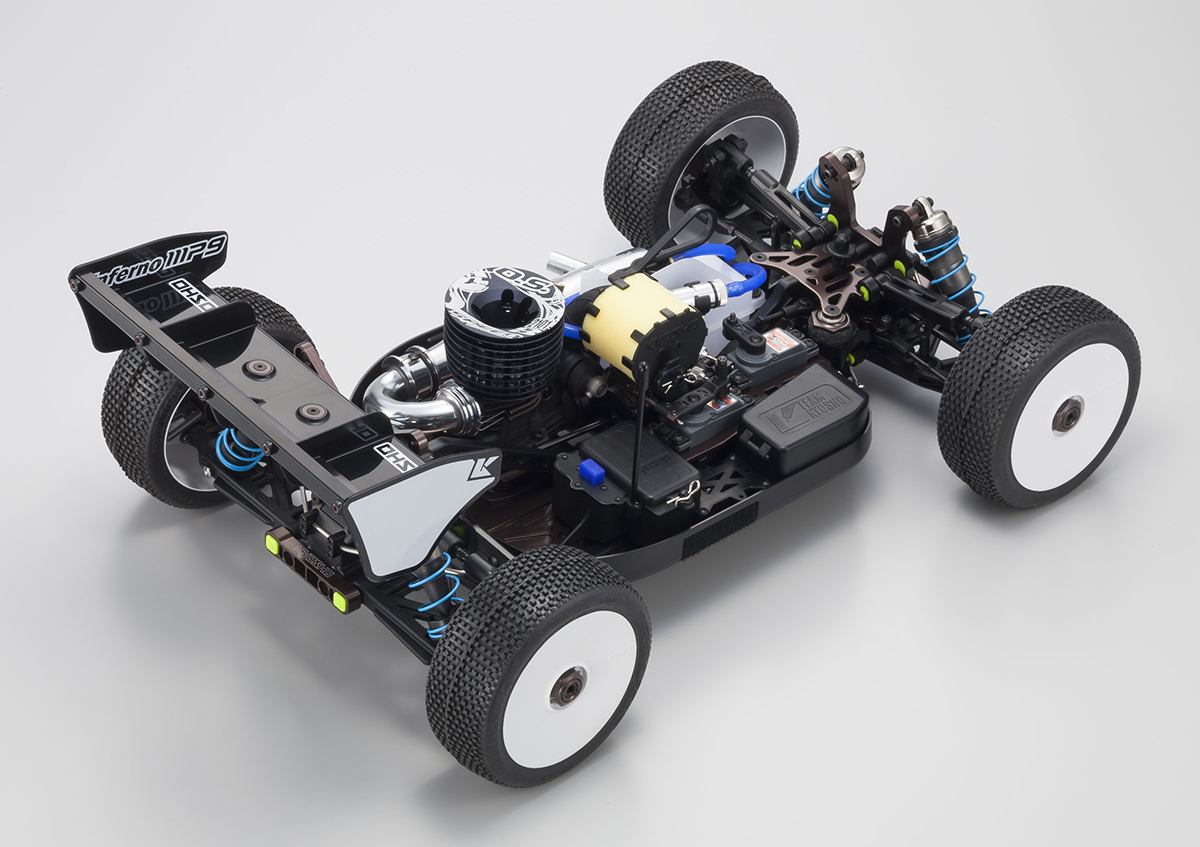 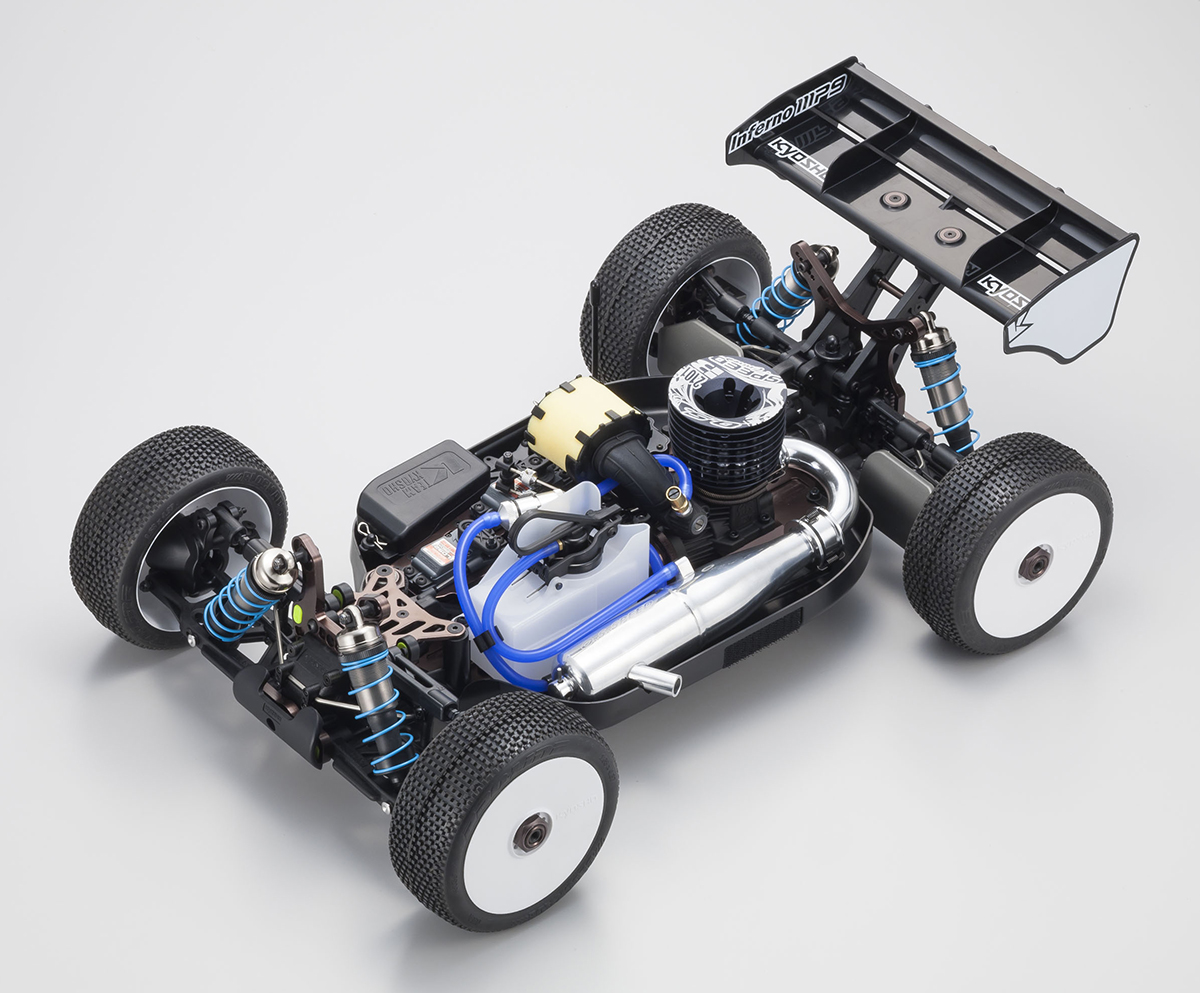 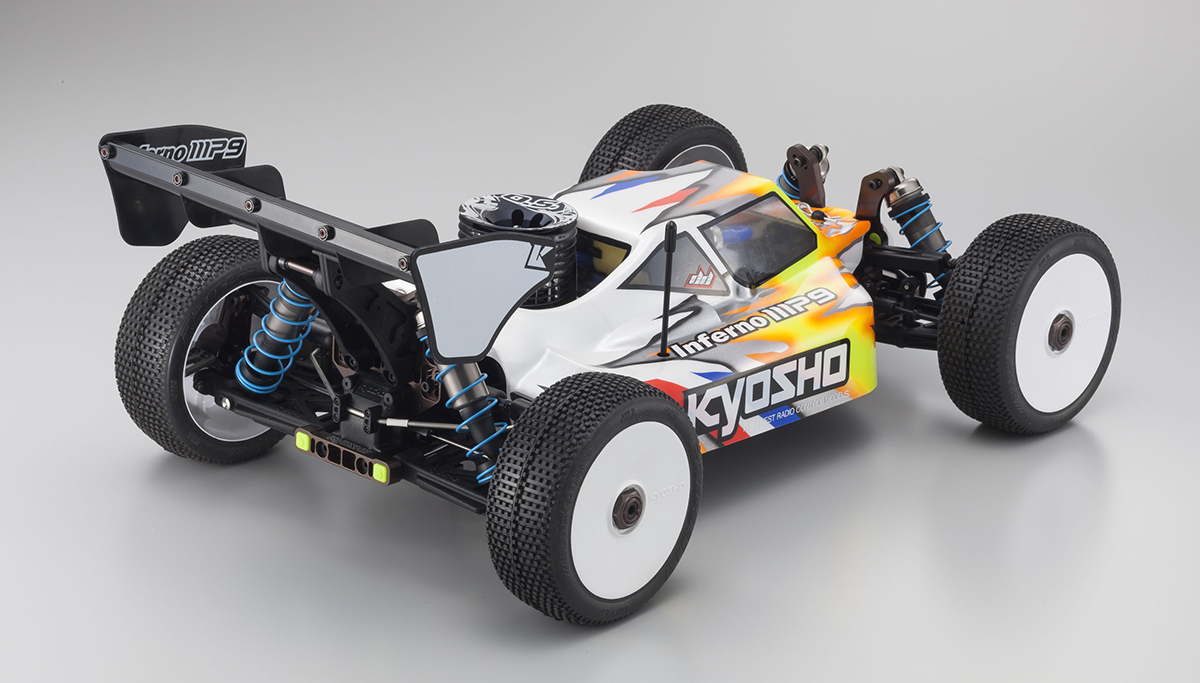 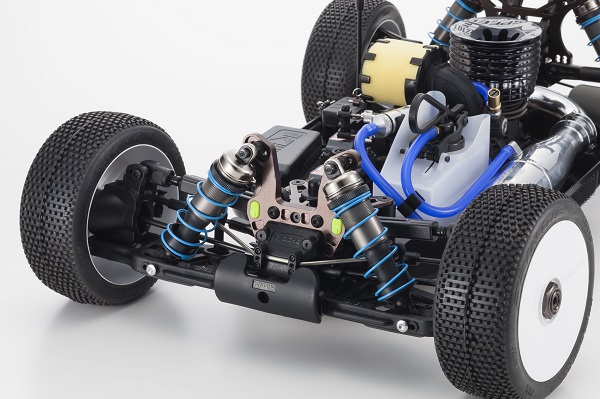 The Kyosho Inferno line, the world’s most successful RC racing machines in 1/8-off road, just produced another evolution of the vaunted MP9, already one of the most developed competition buggies in the world. The new TKI4 is set to release in April and is targeting victory at the upcoming IFMAR 1:8 Off-Road World Championship in Las Vegas later this year. First released in 2008, the original MP9 featured a clean-sheet design. There are many buggies on the market that attempt to copy major design elements of successful buggies, but the MP9 did not rely any design or analysis of any other machine. Its unique design comes from the most experienced designer in the 1:8 buggy world. It produced the eighth IFMAR World Championship for the Inferno line with its record eighth IFMAR title to its credit, along with numerous National Championships and victories at some of the world’s largest 1:8 off-road events.

The new body shell features a much longer cab than the TKI3. It has a longer, flatter roof to produce more laminar airflow across the roof and on to the rear wing. The cab is farther forward (cab forward), more narrow and features a more upright windshield. Downforce features on the side pods of the TKI4 body have also been moved forward. These changes to the body produce more front downforce, which results in improved handling.

Much attention has be given to the new rear wing design, and for good reason. After the introduction of a few vacuum-formed wings, extensive testing showed the reduced weight was of value, but the polycarbonate material is lacking durability. So, a new wing is included in the TKI4 kit that features much thinner construction for similar weight savings, but it’s more able to handle a crash and survive. Two additional vertical planes have been added and two different size wickerbills are included for more or less rear downforce.

A delicate balance is required when choosing materials for the hingepins. Too hard and it snaps – too soft and it bends to easily. The lower pins now benefit from material chosen based on 30 years of off-road nitro experience. They’re stronger than the pins in the TKI3.

High performance servos are only as effective as the inline servo savers in 1/8 off-road buggies. As a top-of-the-line race car, TKI4 customers are expected to install high-performance servos, therefore, the optional heavy-duty servo saver with the lightweight adjuster is included.

Getting all the wires into the receiver box can be a challenge with the new, heavier wires being used on high-performance servos. The opening for the servo wires and other accessories is now larger to accommodate not only the servos, but leads for items such as telemetry sensors and transponders.

These shock pistons have been thoroughly tested in a wide variety of conditions. They produce a little bit less “pack” and smoother, more linear damping than the previous shocks. They’re notably better on tracks with a lot of little bumps and tracks that degrade over time and develop divots. The initial damping of the TKI4 shocks is much more responsive, which provides better traction and a greater sense of confidence for the driver on difficult surfaces.

Kyosho faithful may recognize the overall look of the TKI4’s shock boots as that of the 777 shocks. They are in fact, a similar design that dispenses with the “accordion” style boot. The straight boot has proven to more durable and effective than the dust boot that’s been used on all previous versions of the MP9, so the latest car will include the straight dust boots.

Standard wheel nuts have been standard equipment on previous versions of the MP9 – nylon lock wheel nuts were optional. The TKI4 will include matching gun-metal anodized, nylon-locking wheels nuts as standard. They require far less torque on the wheel nut to ensure they’re secure.

The increased arm length and the addition of the new steering knuckles, makes longer steering turnbuckles a necessity.

The lower shock mounting pins previously had a flat spot that needed to be indexed to the set-screws that secured the lower shock mounting pins. The new pins have a lightened head (every little bit counts) and there’s a groove machined around the entire circumference. That means the pins no longer need to be aligned, and the lower end of the shocks are now more secure than ever.

New aluminum rear hubs feature eccentric inserts to increase the number of roll center options available. The upper linkage rod has an upper and lower mounting position, and now the inserts on the new rear hubs provides intermediate adjustments of just 1mm. This give the racer four different settings instead of two.

Loose air filters are the number one killers of engines, and the filter and filter housing of the TKI4 is designed to best protect your favorite racing engine. The new air filter housing is more substantial than the previous version, and it better secures the foam filter elements to protect the engine. The assembled filter also has a new, more secure mount that will ensure the filter remains in place throughout the roughest A-finals in the world.

The ball ends used on the steering turnbuckles have been made stronger. The wall thickness of the ball ends is increased to keep the fit very tight and strong to reduce wear and increase reliability.

A lightweight 13T vented clutch bell is now standard in the TKI4. Lighter rotating mass is important in terms of quicker acceleration and improved fuel economy. The clutch also benefits by reducing the heat in the clutch shoes and springs, and by allowing the clutch debris to escape from inside the clutch bell.

The lower rear suspension arms benefit from significantly increased webbing around the gussets in the arms. The arms have been reinforced in the web area to make them especially stronger in line with the hinge pin, while still allowing some necessary flex in the perpendicular axis to make shock set-up a LOT easier. Arms that are simply made super stiff in every direction will make the car very difficult to tune properly because there’s such a small tuning window. The new MP9 arms add strength and durability in the right areas, while still providing a car that’s easy to set-up for your conditions and driving preferences.

Like the rear suspension arms, the front arms benefit from all the reinforcing to make them stronger. The front arms are also 2mm longer in than the TKI3 front arms, which allows the use of the 93mm driveshafts. The longer arms also bring the front suspension out closer to maximum width as regulated by world and national organizations, which gives the TKI4 a wider stance for improved cornering.

Extensions visible on the outside of the wing mounts helps to support the new, lighter rear wing and reduces the likelihood of damage in the event of a severe crash. The wing mount is also lower, which keeps the wing at the proper height in relation to the new body, and by keep it lower, it also reduces the possibility of damage in a crash.

The Kyosho wheels for the already come in a variety of colors, but they’ve been retooled to be lighter and the match the dimensions of the most popular wheels and the most popular tires. That means the new wheels will ideally fit all the most current racing tires, and they’ve even been modified to include a rougher surface that will make the glue bead much stronger, which will ensure that your tires remain attached to the wheels.