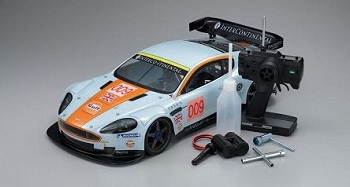 This nitro car is packed with great features like a long wheelbase chassis, 150cc fuel tank for increased runtimes, powerful 4.6cc big block engine, and threaded, oil filled shocks. Check out all the features in the press release below:

The new GT2 is the latest in a popular series of big 1:8 scale nitro-powered cars based on the 7-time IFMAR World Champion Inferno line from Kyosho. The Inferno series has been at the center of the RC racing universe for over 20 years and is the standard by which all other cars are judged. Much of the same technology that earned an unprecedented seven World Championships is incorporated into the design of this new on-road Inferno. The GT2 builds on the popular features of the original GT and adds a number of new features that increase value, durability, user friendliness and speed, not to mention enhancing its unmatched scale appearance.

What is a Ready Set

A Readyset is a fully assembled model that includes nearly everything you need to run. Body Color scheme is complete so only consumables like batteries and fuel are required so you can start operating the model without delay.

If you like this article, check out this additional article on Kyosho.