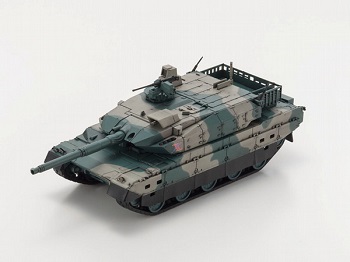 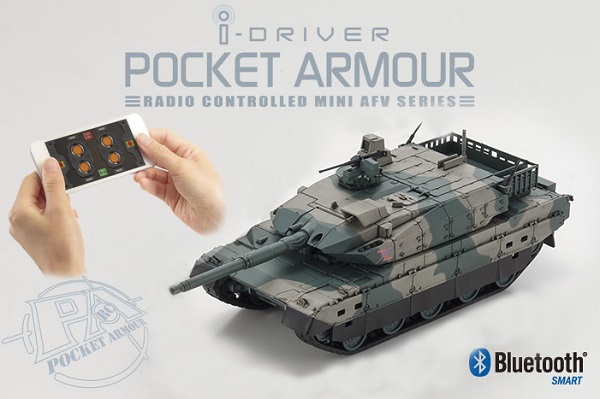 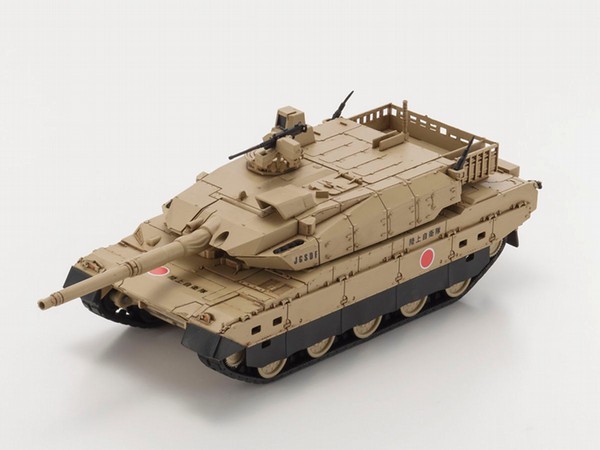 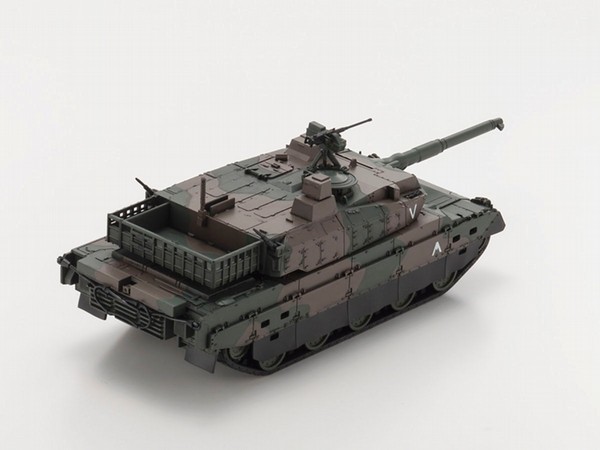 Superior quality design and external finishing create a sense of presence worthy of a display-only model. The fine level of detail of the Pocket Armour series is shown through its exquisite form, feel and coloring that makes it hard to believe it is only a desktop size model. The latest Type 10 Tank from the Japan Ground Self Defense Force is the next proud new addition to this series lineup. *1 Download the control app to your smartphone or tablet. *2 Start driving your own Type 10 Tank with FWD/REV, pivot turning, and recreate shooting action with coaxial machine gun sound effects with a tap of a control button on the smartphone. Shooting action of the tank canon with gimmick recreates realistic tank control, which is managed through Bluetooth Smart on your smartphone. Secure pairing allows one smartphone to maneuver up to 8 tanks simultaneously, just like a tank platoon. Set up linked movement control with your friends, or, link to multiple tanks to control independently. Download the app from the APP store or Google Play and pair your control device with the model in an internet connected environment. Authentication of the model and pairing information through the server is required so an internet connection is required at this stage and prevents non-genuine models and corrupt connections. The GUI control panel on the APP delivers comfortable and intuitive control that is easy enough for anyone to use with four movement control buttons and two shooting buttons. Select ‘Secret Mode’ to access the beta version of the ‘One-Hand Mode’ control that allows one hand to be used for changing settings etc. while the other hand controls operation of the model. This new Type 10 Tank features a new design based on enhancements to the chassis from the original series. Regardless of size, the ultimate precision finish and detail on the body of the Type 10 has no rival. The use of pliable materials in components such as the antenna and 50 caliber machine gun are ready for heavy action as well as scale realism. (A rigid machine gun is also included for use as a display model). Tow cable and side curtains are also recreated with soft material to reproduce a molded finish that has never been achieved before. New chassis design smooth’s the approach angle for improved climbing performance and superior performance on road surfaces is achieved through optimized roller wheels and crawler belts.

You can enjoy the powerful run beyond the size. Controlled using smart phones with Bluetooth smart. Equipped with iDRIVER. Forward and Reverse functions as well as gun shooting sound effect. Download the free application from each store. Simply play by initial registration under internet environment. Included with machine gun (Left) made with soft material and, high detailed machine gun (Right) made with ABS which you can separate the machine gun and it’s base of the gun. First model in the series to have a removable towing wire made with soft material. Rear view camera built with separate parts. Power switch hidden under the cannon which is the tradition of the P.A. Antenna’s and side skirt made with soft material. Cutting the side skirt allows you to make the model look more real. Tank idler wheel positioned in the front side same to the actual tank in order to have the model look real. Making the approaching angle with fewer steps allows the model to run better. Common chassis used in the previous series are not used in this model. Brand new chassis specially for this Type10 has been developed. This allowed to reproduce the model with dimensions based on the real tank without any deformation. Completed in full painted body also with inking. Having the high quality look same to the actual Type10 tank. With additional decoration allows you to enjoy the model more.

*Depending on network performance or device version, the functionality, response speed and image quality can vary.