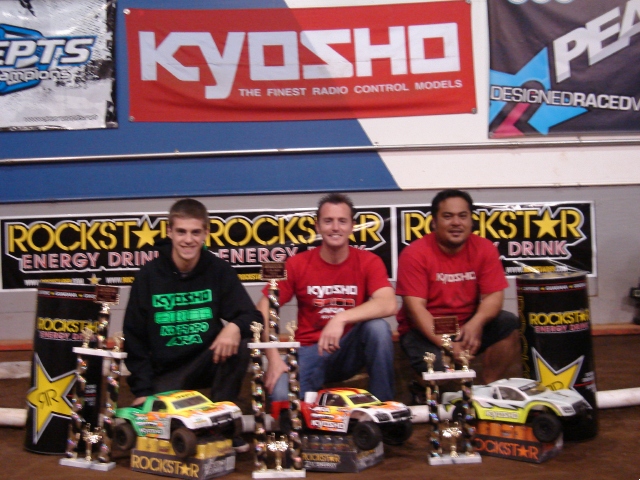 The 2nd Annual Rockstar Short Course Series was held at Portland R/C Raceway in Clackamas, Oregon. This 8 race series began in November of 2010 and went through May 2011. Each drivers 5 best points out of the 8 races were used to determine the Champion for each class. This years series grew by more than a 25% from last year averaging over 60 entries per event. The single largest race of the series reached a staggering 75 entries! This year AKA stepped up as the official Tire Sponsor for the series. The spec tire for all classes was AKA’s Grid-Iron in Super Soft Compound.

In the Box Stock Short Course Class the rules were simple. You must run the RTR SC Kit how it comes out of the box. The drivers were able to use the AKA Spec Tires and any 7.4v Li-Po Battery. No option parts were allowed in this class. After everything was said and done, it was the Kyosho Ultima SC that would take home the Series Championship driven by Del Ebetuer!

In the Stock Short Course Class, the drivers would be able to use any 7.4v Li-Po Battery, any speed control with0ut timing boost, along with any 17.5 Brushless Motor. Up and coming young local talent Chris Nealeigh was able to wrap up the Series Championship by the 7th round with his Kyosho Ultima SC that he converted into an SC-R replica! Joining him on the podium would be Jared McCormick in 2nd and Zeke Lacuesta in 3rd, both with Kyosho SC-R’s making it a Kyosho sweep on the podium!

The Modified Short Course Class would see many epic battles throughout the series between last years defending champion Joe Pillars and rising star Andy DiBrino. Pillars was able to TQ and Win all 5 races he attended to take home the Modified SC Championship Back 2 Back! Andy DiBrino would go onto finish 2nd overall with Zeke Lacuesta finishing 3rd, once again making it a Kyosho sweep on the podium!

Portland R/C Raceway would like to thank all its sponsors for this years series: Rockstar Energy Drink, AKA, Kyosho, Team Orion, Peak Racing, Lunsford, and The Big RC!