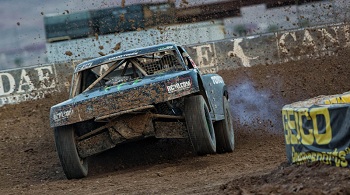 The Kyle LeDuc 99 team made their way to Las Vegas Motor Speedway this past weekend for Rounds 13&14 of the Lucas Oil Off Road Racing Series.

Round 13 started off right back to LeDuc’s dominating ways. LeDuc would once again find himself sitting on the front row leading the pack to the green flag. All it took was one corner for the sold our crowd at Las Vegas Motor Speedway to realize that Kyle LeDuc meant business. LeDuc wheeled his Monster Energy/Toyo Tires Pro 4 Unlimited to a commanding lead but unfortunately shortly after the start of the race, LeDuc’s truck would see mechanical failure. LeDuc didn’t let his mechanical failure bring him down and would manage to muscle the Monster Energy #99 to an exciting fifth place finish.

LeDuc and team made their way back to the pits after a disappointing Round 13 in search for a better outcome in Round 14. Round 14 started out just as Round 13 did; LeDuc quickly made his way to the front of the pack and took a commanding lead. Kyle LeDuc seemed to be untouchable for the majority of the race as the rest of the field was left racing for second place. With two laps remaining, the Toyo Tires on the Monster Energy Pro 4 #99 still had enough bite to put Kyle LeDuc up on two wheels and send him heading straight towards a wall. With incredible skill, LeDuc was somehow able to tame the #99 and bring it back under control only loosing one position in the process.

Unfortunately for LeDuc, the Monster Energy #99 would break a five-dollar part in the process and cause him another position with just a half of a lap remaining. LeDuc would finish out Round 14 in the third place position and would retain the championship points lead.

“We had the fastest truck all weekend long and had a $5 part failure, that makes it tough to continue to run at top speed and unfortunately we didn’t take home the wins after leading both days. We are still in the points lead and that’s what matters at this point,” Kyle LeDuc commented.

Kyle LeDuc 99 is looking to clinch the 2012 Lucas Oil Off Road Racing Series Championship in Round 15 at Firebird Raceway in Phoenix, Arizona on October 27th and 28th. With a full month of preparation ahead, Kyle LeDuc and the Kyle LeDuc 99 team is going to Arizona with full force.

For more information on the Kyle LeDuc 99 team visit: www.99duc.com