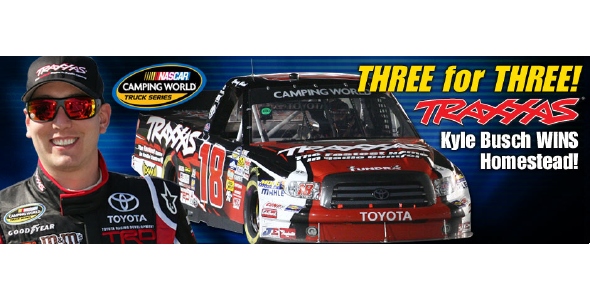 Nov. 19, 2010: Just as he has for much of his NASCAR career, Kyle Busch put an exclamation point on his latest triumph—the owner’s championship in the NASCAR Camping World Truck Series—by winning the season-ending Ford 200 at Homestead-Miami Speedway. The race marked Busch’s third appearance in Traxxas colors, and once again Busch carried Traxxas into the winners circle, just as he did in Chicagoland and Talladega.

The driver of the No. 18 TRAXXAS Toyota Tundra for Kyle Busch Motorsports (KBM) needed only to finish 29th or better in Friday night’s season finale at the 1.5-mile oval, but never one to settle for anything, Busch led six times for a race-high 57 laps to notch his eighth Truck Series victory of the year and the 24th of his career.

The effort allowed Busch to secure the Truck Series owner’s championship with an iron fist, as the No. 18 KBM team ended the season with a 150-point margin over the No. 30 truck of Germain Racing, which finished second in the owners’ standings but won the drivers’ championship with Todd Bodine. Bodine drove the No. 30 Toyota Tundra throughout 2010, while KBM split the season among Busch (16 races), Brian Ickler (seven races), and Johnny Benson and Kasey Kahne with one race apiece.

Any championship is a monstrous achievement for an organization, but perhaps more so for KBM, as 2010 was its first season in the Camping World Truck Series. With the owner’s title now in hand, the No. 18 KBM team is the first rookie squad to take the series’ owner’s championship since Richard Childress Racing won the inaugural Truck Series title with Mike Skinner in 1995.

“I feel like I won with my people this year, and the guys that we have on board were just tremendous supporters of mine and worked long, hard hours in the shop, never gave up, never held their head down, never pouted about how much we were working, but just kept working and made sure we were always ready for the next race,” said Busch, who at this time last year was only in the planning stages of building his Truck Series team, with still employees to hire and trucks to build. “This is what we set out to do at the beginning of the year – to come out here and work as hard as we could, to work with two different drivers at first, myself and Brian Ickler, but when Brian got the call to go drive for Roush Fenway Racing, we brought in Johnny Benson for a race and we brought in Kasey Kahne for a race, and without all those guys being able to give us good, solid finishes, we wouldn’t be in this position.”

“I feel like we’ve got a great product,” Busch said. “I can’t thank everyone who supported us this year enough. It’s fun to come out here and participate in the Truck Series. We’re still looking for sponsors to do it some more next year. It’s real tough. Hopefully, we can find some.”

Adding to the aura of the owner’s championship was that it also served as the first racing title of any kind for crew chief Eric Phillips.

“I don’t know if I’ve quite come down from what’s went on yet,” said Phillips, who first worked with Busch in 2003 as the then 18-year-old’s car chief during his NASCAR Nationwide Series debut at Charlotte (N.C.) Motor Speedway, where Busch finished second. “For this to be a brand new team, with all new guys, basically nine months ago, it’s a huge thing. Kyle didn’t own a screwdriver when he left here last year, and to win an owner’s championship with four different drivers, we pulled together and made it work. It’s been a pretty fun year.”< For KBM director of competition and general manager Rick Ren, winning the title was still special, even though it was old hat for him, as he nabbed Truck Series championships as crew chief for Ron Hornaday Jr., in 2007 and 2009. “I’m proud, personally, but I’m also very proud for all of our guys,” said Ren, who also has 16 career Truck Series wins as a crew chief. “We all aimed for the same goal. We didn’t have a truck in the shop until after the first week in January and we only had about three or four people. But we got to Daytona and we had the fastest truck and it was because people believed in each other. “I’ve got enough experience in racing for championships that I don’t let things bother me. You still maintain your focus. You have to race to win races, every week. If you points race, you’ll rattle yourself. And if the cards fall right, you win. I just made Kyle a promise that I would act like this was my race team and my money, and here we are.” The championship capped a banner rookie season for KBM, as the team scored eight victories, six poles, 16 top-fives, 21 top-10s and led 1,099 laps in 2010. It will return to action Feb. 18, 2011 for the season-opening race at Daytona (Fla.) International Speedway with SPEED again carrying live, flag-to-flag coverage. Finishing .577 of a second behind Busch in the Ford 200 was Hornaday, while Johnny Sauter, Bodine and Aric Almirola took spots three through five. The rest of the top-10 consisted of Matt Crafton, Justin Long, Skinner, Miguel Paludo and Tayler Malsam. The event featured six caution periods for 26 laps, with three drivers failing to finish the 134-lap race. Based in Plano, Texas, Traxxas has been building the world’s fastest Ready-To-Race® radio controlled vehicles for over 23 years. Traxxas models are sold exclusively in Hobby Stores, 4-Wheel Parts, and Pep Boys.