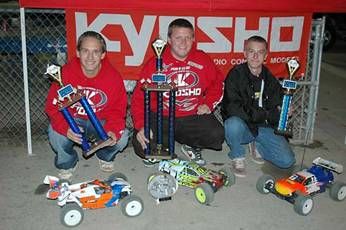 Kyosho drivers Cody King, Tyler Vic, and privateer Jeff Nicol finished 1-2-3 to make it another all-Kyosho Inferno ST-RR podium in the Truggy class, this time at the Kyosho Fall Classic held at Revelation Raceway in Montclair, CA. Kyosho’s Ryan Lutz went out to an early lead with his ST-RR but started losing ground at about the 20 minute mark as one of his tires was becoming unglued. The hard-charging top qualifier Cody King, who got shuffled to the back of the pack after another first-turn melee, was turning fast and consistent laps, eventually re-passing all the other trucks to close in on Lutz. King eventually pulled even with Lutz and then passed him moments later with the two drivers running side-by-side for a lap or two. What promised to be a great battle between two of the top Kyosho drivers never materialized because Lutz retired shortly thereafter with a mechanical problem. Tyler Vic moved into the second slot with Jeff Nicol taking the final podium spot with a third place finish. Jake Malkin, another privateer in his first-ever race with his new ST-RR, came home in the 4th spot, with Lutz, who accumulated enough laps before retiring, holding on to the fifth spot.