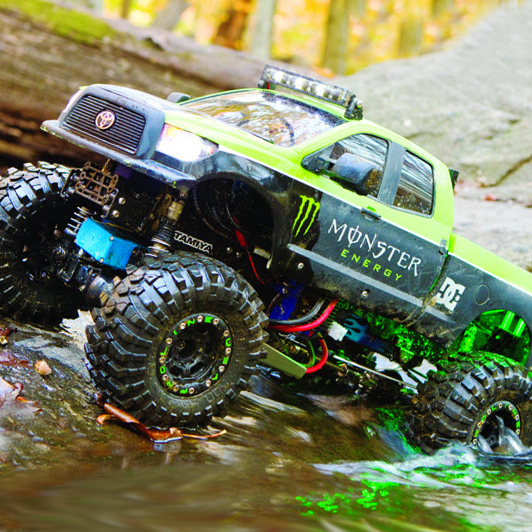 Over the many years that Radio Control Car Action Magazine has been around we have featured some awesome monster truck projects. I’ve been inspired by many of those projects and have been lucky enough to build some of my own. This week I wanted to share my top 5 picks of the best monster truck projects of all time. It wasn’t easy to narrow them down to five but somehow I managed to do it. 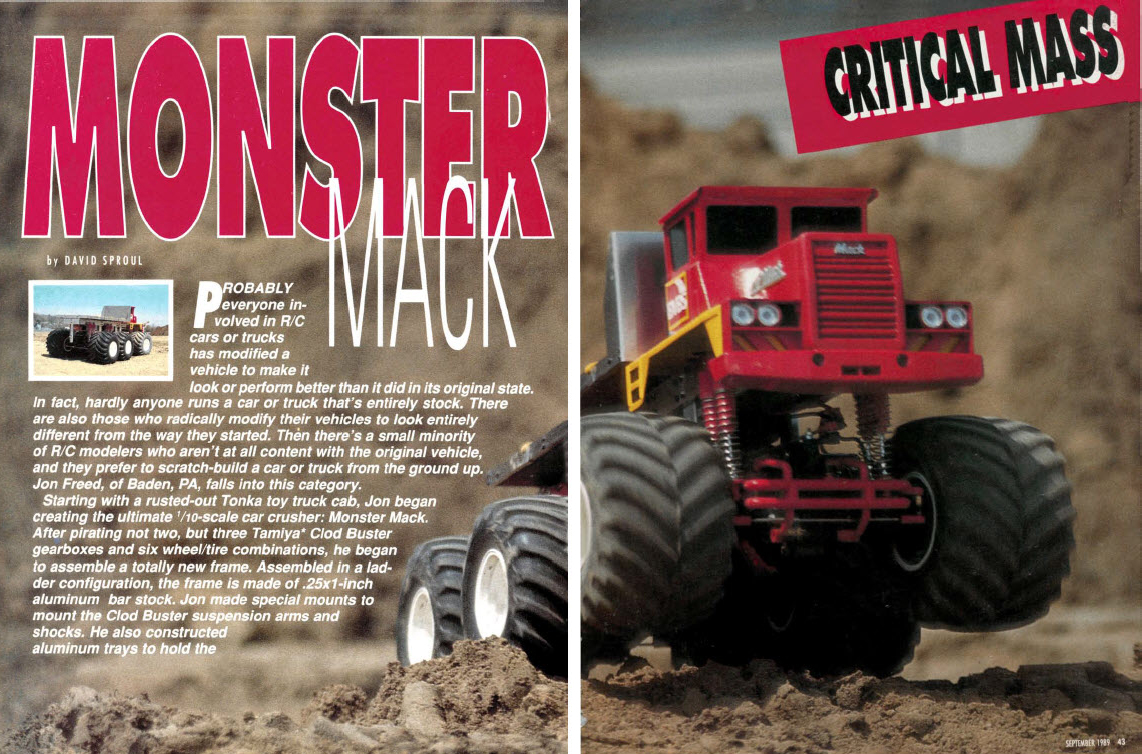 Monster Mack
This truck was featured in the September 1989 issue and I couldn’t believe my eyes when I saw it for the first time. I sat at the dinner table and couldn’t stop staring at it while my dinner was getting cold. It must have been really cool if it stopped me from eating. This was the first ever 6×6 Tamiya Clod Buster to be built and featured in the magazine and it featured a custom built aluminum plate chassis with an awesome Mack truck body topping it off. Three mechanical speed controls were used to power the three stock motors on the gearbox and they were all connected using a single servo with a custom made linkage. I built my own 6×6 truck using scrap metal and a Tamiya Bullhead but it wasn’t half as cool. I’m in the process of building a truck similar to this one with a bit of a modern twist and 6 wheel steering. The coolest part is that I was able to get my hands on that Mack truck body but unfortunately it’s too rusted to make anything happen with it so I am using the body dimensions and some ABS plastic sheet to make my own. I also plan on installing some lights and a custom made smoke system to bring it to life. 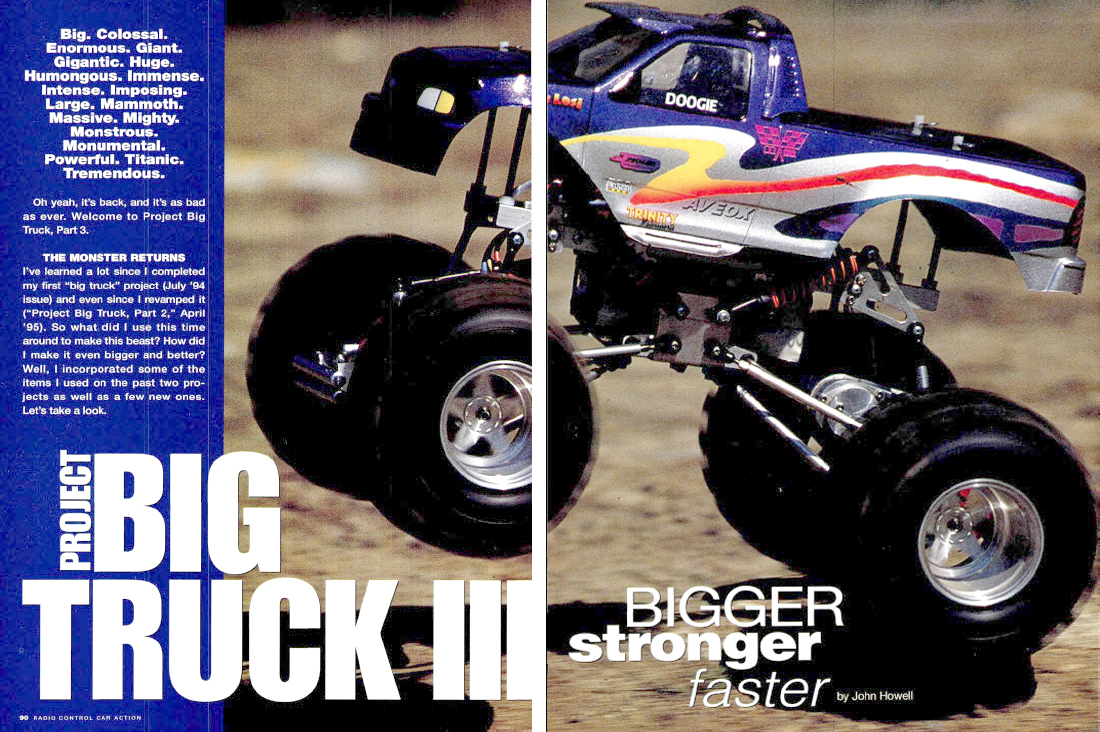 Project Big Truck 3
There were three versions of Project Big Truck and everyone was based on the Tamiya Clod Buster and all three versions were the main cover image for each of the issues that it was featured in. The July 1997 issue had the last and in my opinion the best version of the truck. It featured machined aluminum gearboxes, aluminum wheels, an ESP chassis and suspension kit and it had brushless motors. Having brushless motors isn’t that big of a deal now but when the truck was built it was a big deal because brushed motors still ruled the world of electric vehicles. It would take many years after this truck was built for brushless power to take over the world. 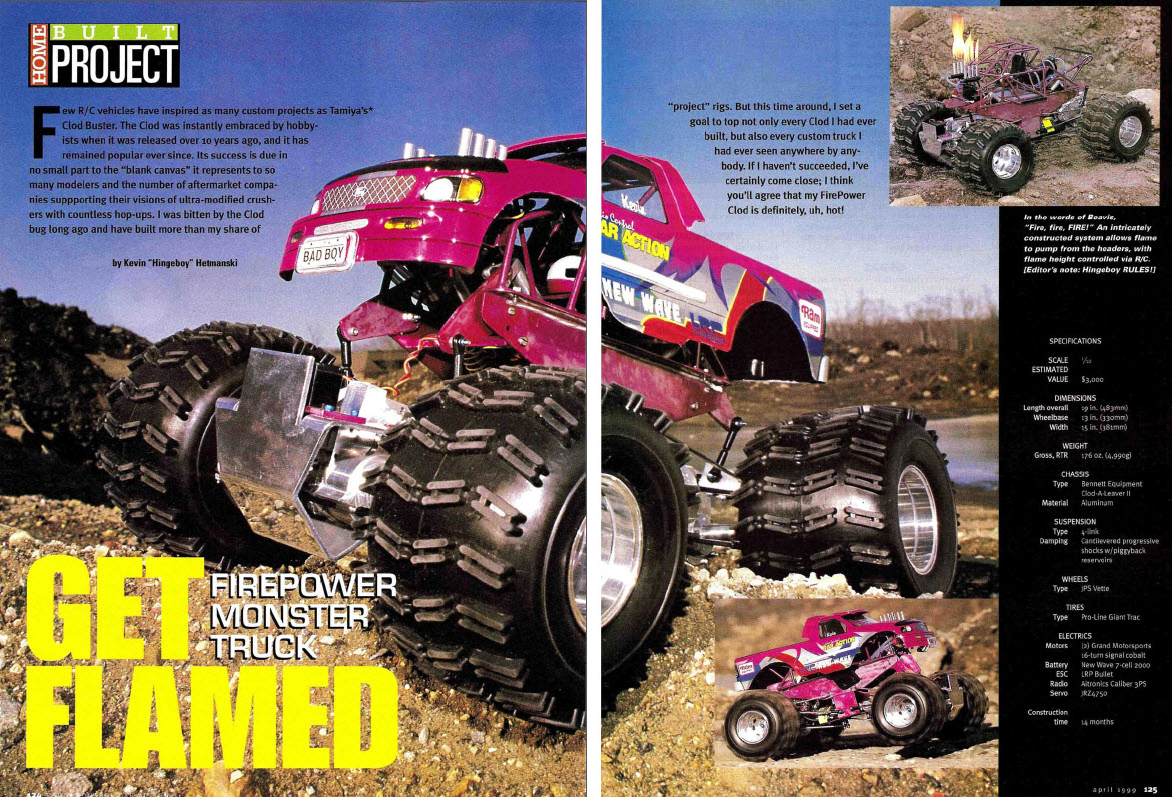 Firepower Monster Truck
A few years after the last Project Big Truck was featured I decide to build my own version but I took things to another level. My truck also featured aluminum gearboxes and wheels but my truck used a Bennett Equipment chassis and suspension kit for the Tamiya Clod Buster. To make it stand out I had the chassis custom anodized and I topped it off with a scale roll cage that I made out of Brass tubing. Other features included a custom painted Parma truck body, neon lighting, custom made brushed motors with rare earth magnets and progressive suspension shocks. My favorite feature of the truck was the flame throwing system that I designed and built. See those small flames? Well it was 10 degrees outside the day we shot it so that was all we were able to get out of it due to the lower pressure in the tank. That’s what happens when you have a deadline but I can tell you that on a warmer day I was able to get those flames to shoot at least a foot and a half in the air. It sure was an awesome site! I’m currently working on a new custom rig that will have a new and improved flame throwing system. You’ll just have to keep your eyes on the magazine and check it out when it’s done. 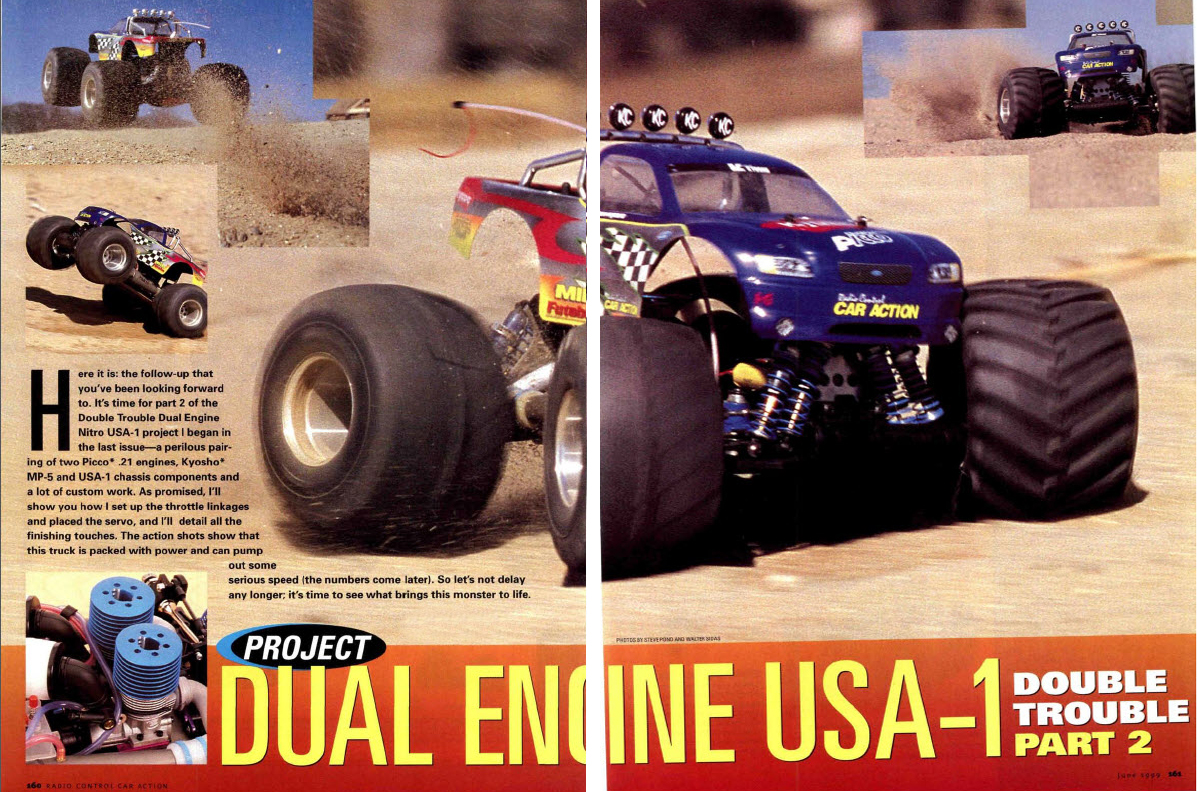 Dual Engine Kyosho Nitro USA-1
I love it when projects are taken to the extreme and this is one of those trucks. A Kyosho Nitro USA-1 was the base for the project and normally in a situation like this we would simply add a high end race engine to the mix and call it a day but this one had two race ready nitro mills stuffed into the chassis and each got their own fuel tank and tuned pipe. A custom throttle linkage had to be made to allow the servo to open each carb at the same time. It was covered by a trick custom painted Pro-Line Ford F-150 body has these crazy shocks that had clear plastic bodies so you could see the dyed shock oil and pistons inside. I was able to see this truck run and when fired up it sounded like a swarm of angry bees and it had some serious power. It sure would be cool to build another one of those trucks. 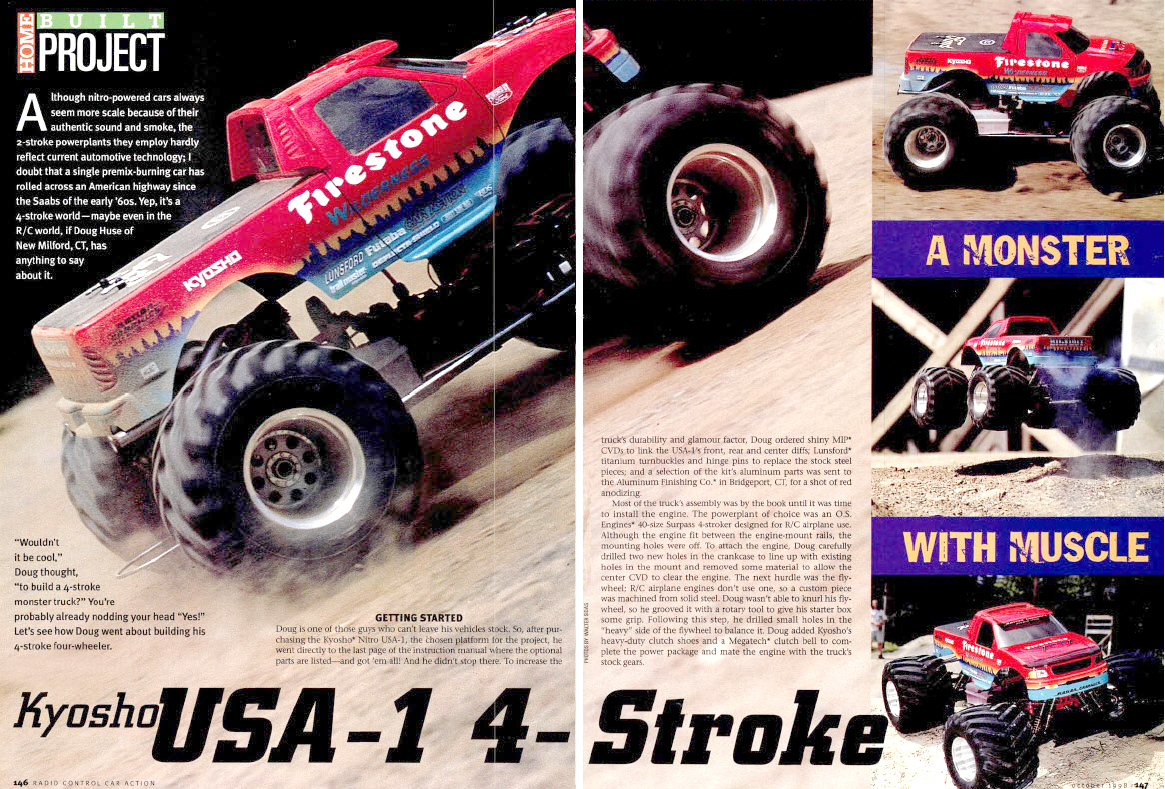 Project 4-Stroke Kyosho Nitro USA-1
Sure, from the outside this looks like your average project Nitro USA-1 but the stock nitro burning 2-stroke engine was thrown out and replaced by a 4-stroke engine. The engine used was designed for airplane use and required a custom flywheel and fan system to make it work in the truck. It also featured a custom made dual rear exhaust system that blew the exhaust smoke out the back of the truck. The owner of this truck had all of the aluminum parts custom anodized red and had a custom painted Parma Bigfoot body on top. After this project was featured in the magazine we started to see car specific 4-stroke engines popping up and Kyosho released an on-road car with a 4-stroke engine to power it. We also built two more projects that used 4-stroke engines a few years later.