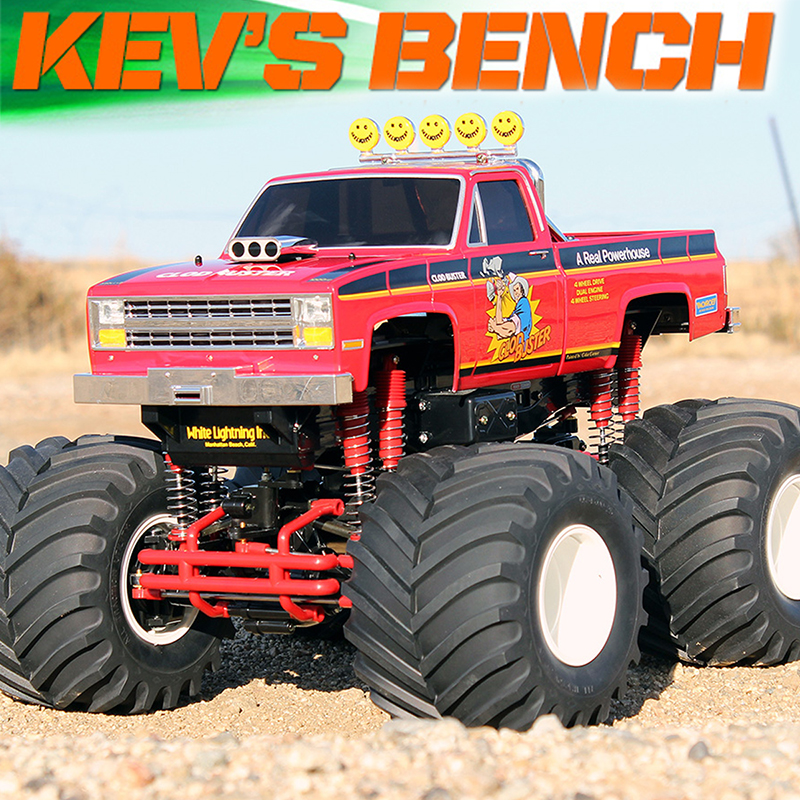 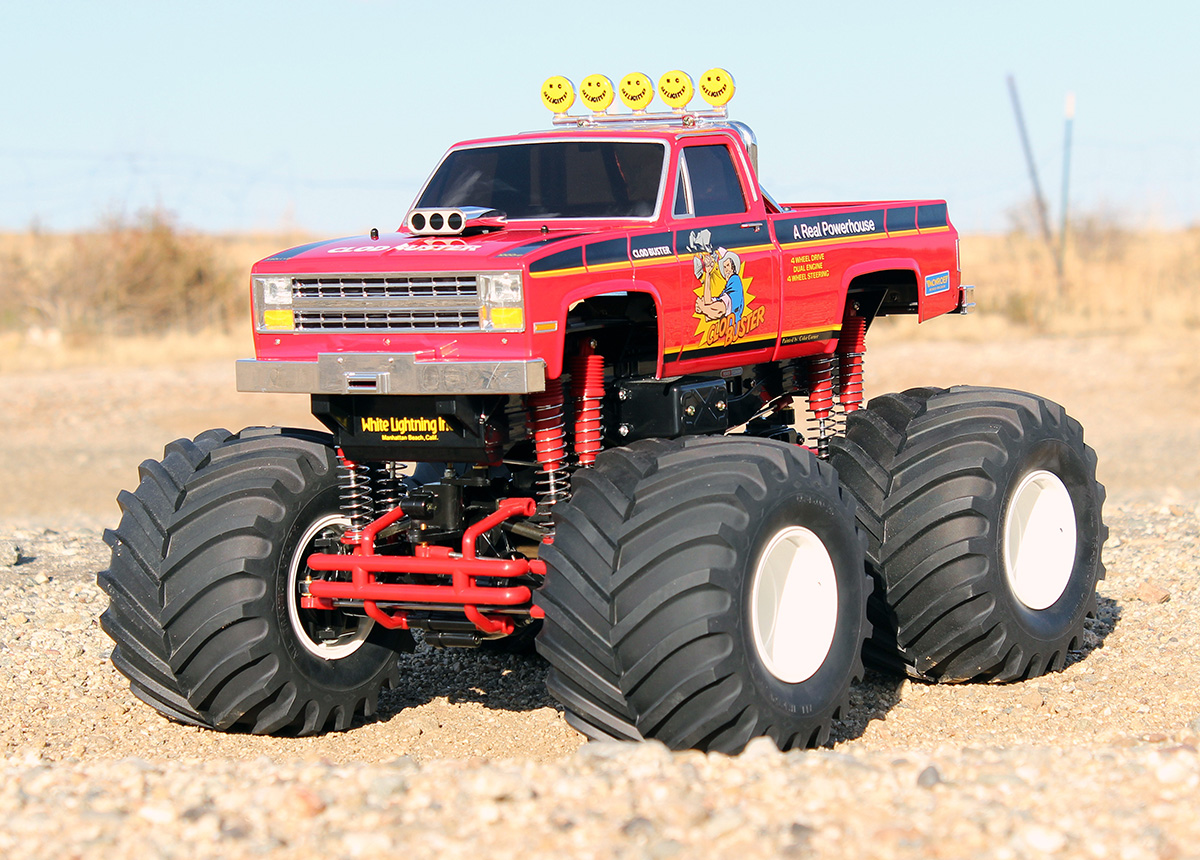 When the Tamiya Clod Buster was released in 1988 I was 13 years old and I couldn’t believe my eyes when I saw it for the first time. What kid isn’t a fan of monster trucks? The Clod looked just like the real deal; I was obsessed. Over the years I have built a lot of Tamiya Clod Busters, so many that I have lost count. I’ve built Clods with tilt noses and beds, 6x6x6 Clods, race clods and the list goes on and on. With the growing popularity of re-release kits from back in the day, I thought it would be cool to build a box-stock Clod Buster. When I was 13 I didn’t have the best building, painting and detailing skills so my first Clod Buster wasn’t even close to looking as cool as the truck on the box. Now things are different and not only did I want to enjoy building a stock kit, but I also wanted to make my truck look just like the one on the box. All the work on this build went into the body; it took me months to get it where it is today. 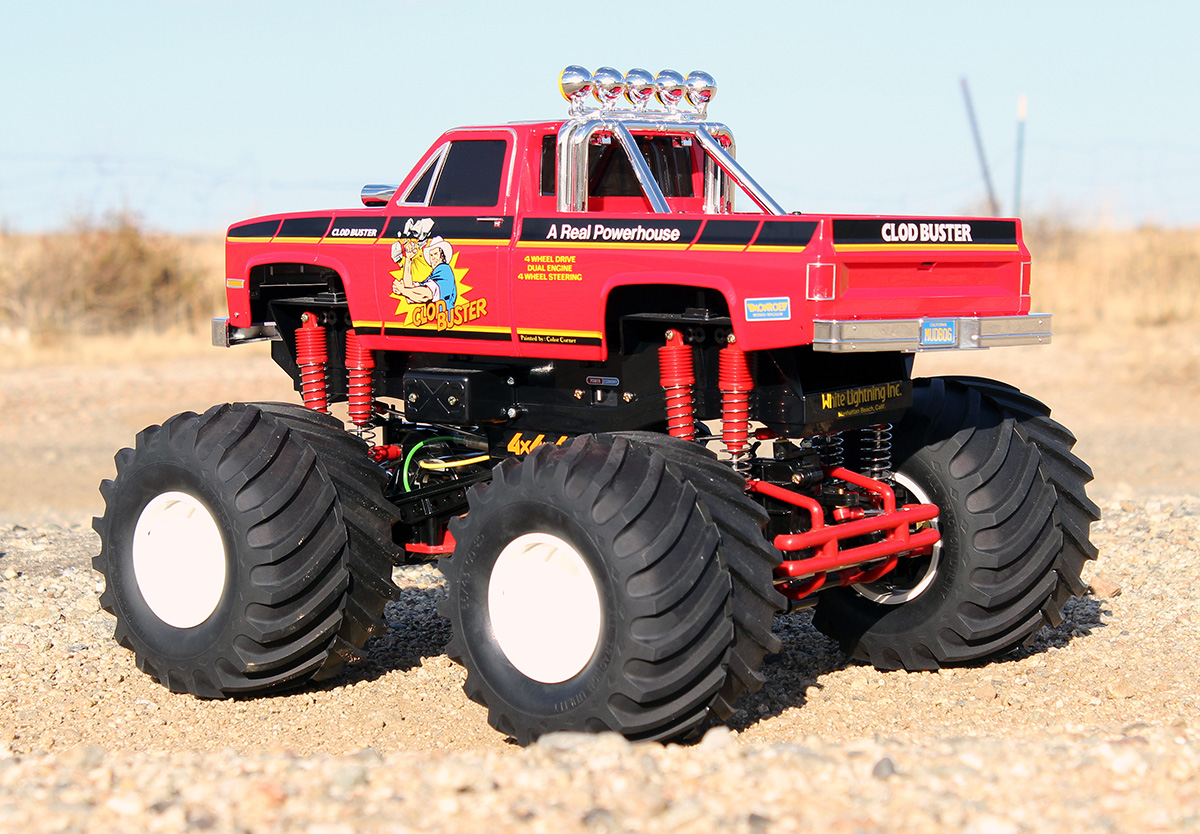 I went over the body before any primer or paint was sprayed and removed mold lines and filled in any dips in the plastic. When you look inside the wheel wells of a full-size truck you see black because of the inner fenders that are installed. Since the body on the Clod Buster sits so high you will easily see underneath the body. I didn’t want to see stock white plastic, overspray looks terrible and red wouldn’t be like real trucks. So, before I sprayed the outside I gave the inside of the body a coat of Tamiya Matt Black. I sanded the body with 1,000 grit sandpaper to smooth out any Matt Black overspray that made it’s way onto the body and to give the primer something to stick to. Before priming I taped off all open areas of the body to keep overspray out and gave it two coats of Tamiya White Primer. I let the primer dry for a few days and sanded it with 3,600 grit sandpaper. Then 3 coats of Tamiya Italian Red was applied and I let it dry for over a week before sanding with 3,600 grit sandpaper. Again 3 coats were applied and sanded before I finished with 2 more coats. This time I let the body sit for over 2 weeks to let the paint dry. The longer the body has to dry the harder the paint and the better the finish when you are done polishing it. 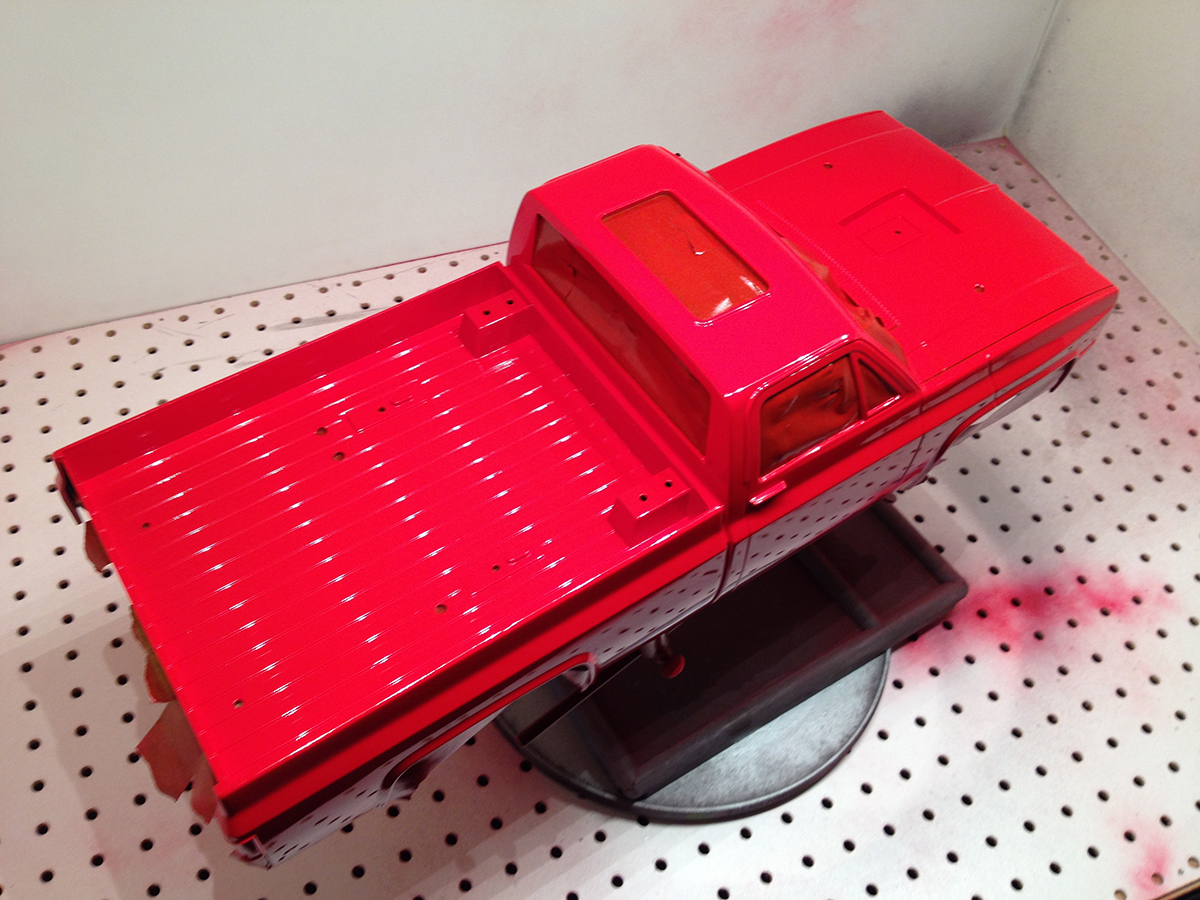 The body in the spray booth with its final coat of paint. It looks great now but some polish will really bring it to life.

I polished the body by sanding with 6,000 and 8,000 grit sandpaper and finished by rubbing it down with Mothers Sealer and Glaze and finished with a coat of Mothers Carnuba Wax. All of the detailing was done by masking the areas and spraying them with the colors called out in the manual using a Tamiya HG Airbrush. I mistakenly painted the trim around the sunroof, side windows and windshield with silver paint instead of black like they did on the box stock paint job. I figured this out after the body was complete and in the end I decided to keep it that way because it looks pretty cool. It took me a while to figure out how to efficiently paint the black sections of the grille. I ended up doing it with the tip of a Parma Detailing Marker. Now I have the Clod Buster that I wanted to have when I was a kid. This time the truck isn’t going to see the ground, instead it will sit on a self and remind me of the good times that I had as a kid. Next up might be a 80’s style mod Clod. I’m thinking of installing a scale engine, giving it a tilt nose and bed, lift kit, oil shocks and a few other sweet mods.

After very little work I was able to get a very good shine on the body. A little fine grit sandpaper and polish goes a long way. For more info about the tools I use to paint “hard bodies,” click here.

Have you ever painted an injection molded body? I’d love to see it. Send your photos to kevinh@airage.com.