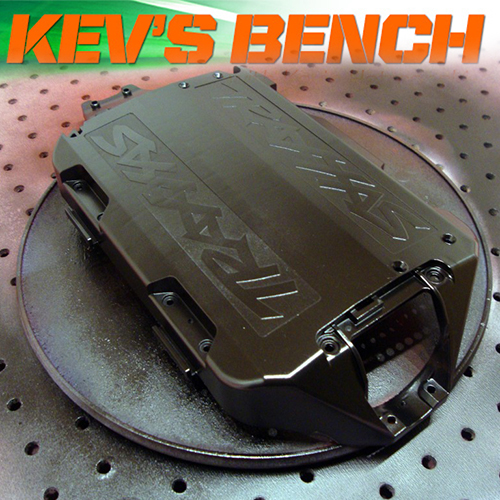 I am working on a Project Traxxas Slash 4×4 Platinum that is going to be featured in the next edition of the Buyers’ Guide and when building a project I always try to do something that will make the project stand out from others that may have been built in a similar way. When looking my Slash 4×4 over I decided that it would be cool to change the color of the chassis from gray to black; I have dyed RC parts before but never a chassis. The process is the same except for the size of the pot and amount of dye needed to make it happen. I don’t like to use my expensive pots to dye parts because it may damage them and I don’t want to cook food in the same pot that cooked RC parts. For this chassis job I picked up a cheep 16 quart pot which is just big enough to fit the chassis and a little water above it. Before putting the die in and warming up the water I placed the chassis in the pot and filled it with water and covered it by about an inch. I removed the chassis, filled the pot with an entire box of black Rit fabric dye and warmed up the water until it was almost boiling. I carefully placed the chassis back in the pot and let it sit for about 20 minutes while I took care of some other things. I pulled the chassis out and it had more of a dark blue color than black and it was blotchy. They can’t all go well. The chassis would have totally worked for what I am doing and you would have never noticed if I didn’t tell you but I had an idea. There are now a lot of paints available that are designed to bond to plastics so I picked up some Krylon Fusion black paint with a satin finish. I washed and dried the dyed chassis and gave the top and bottom two coats of paint. The finished product looks great and the good thing is that if it get’s scratched there’s still “black” underneath so it won’t be as noticeable as would if it was gray still. This is my first time painting this kind of chassis so we will see how well or bad it does at holding up. You never know what’s going to happen until you try it. 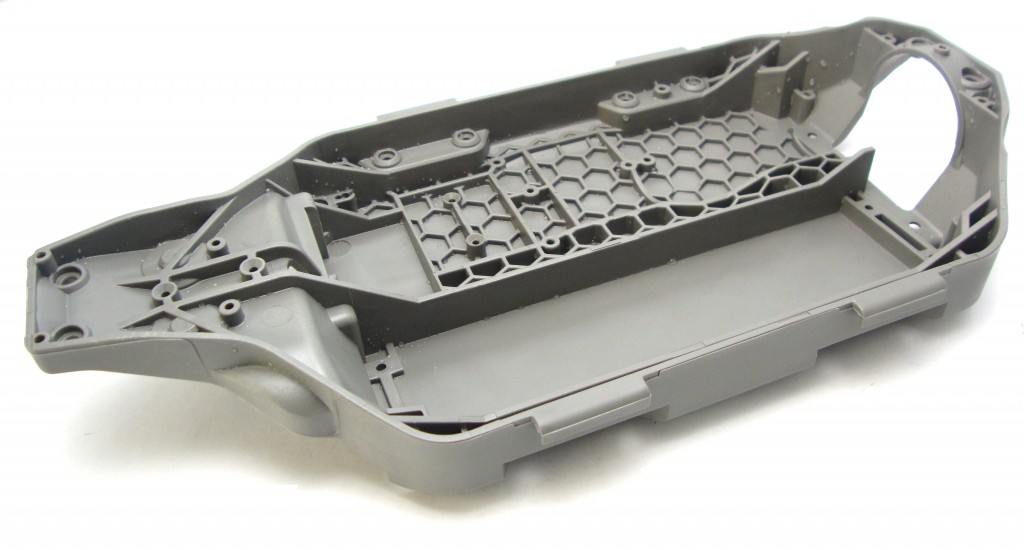 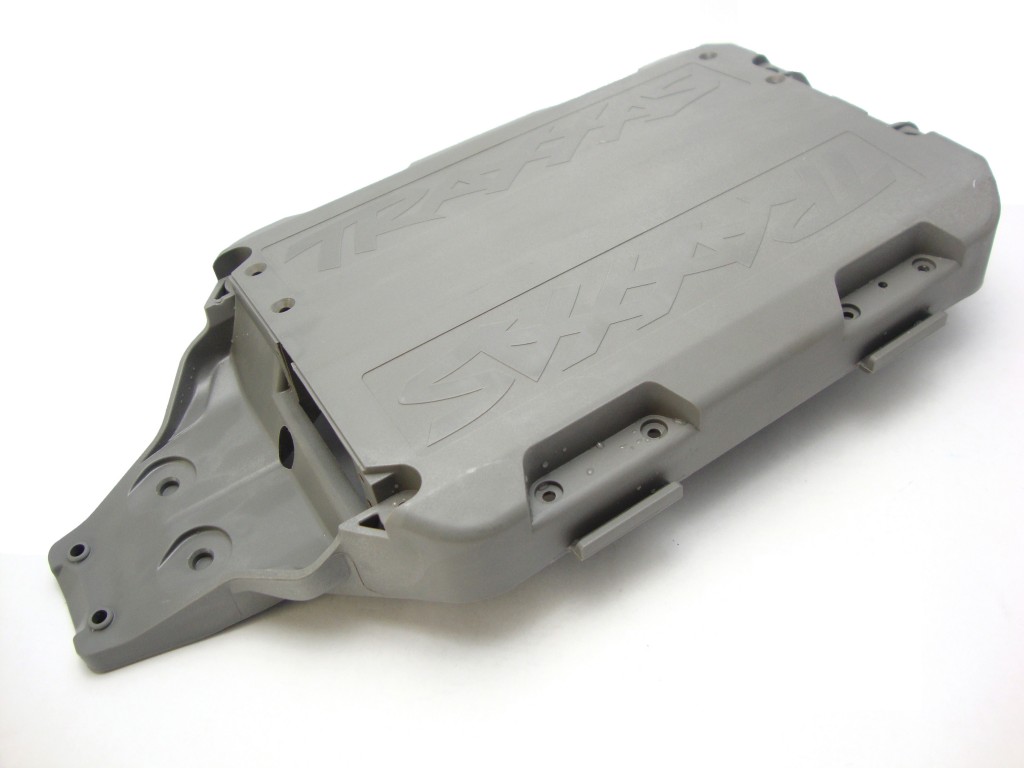 Here’s the stock gray chassis. I wanted to change up the look of my truck so I decided that black would be a good way to go. 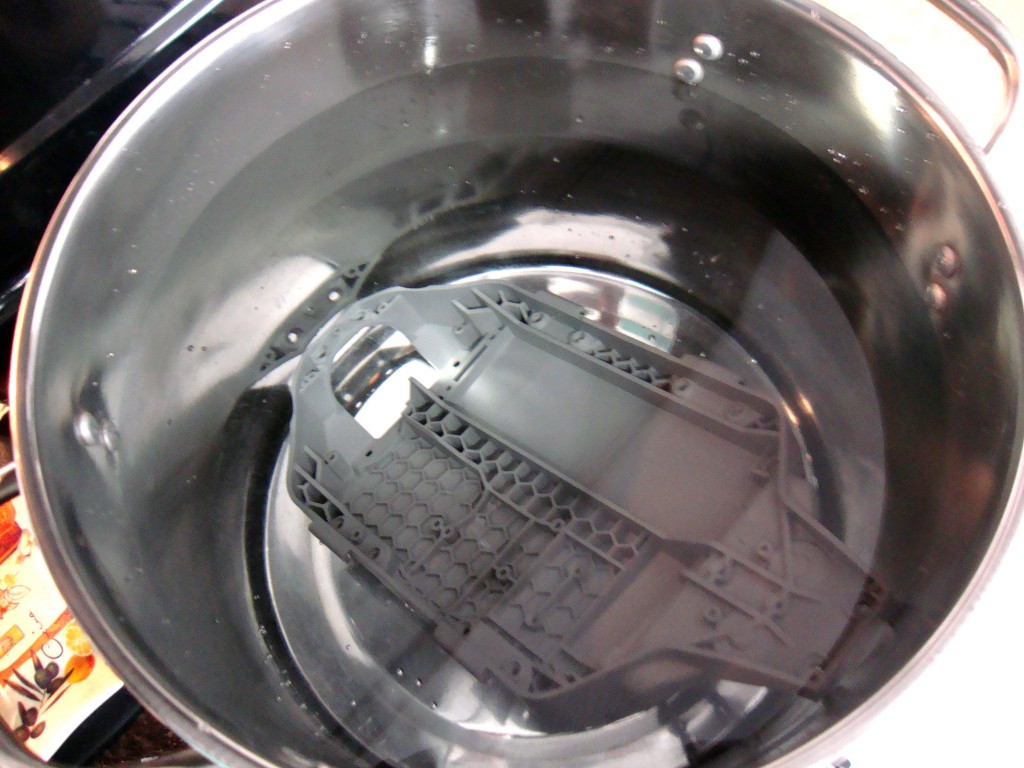 With the pot on the stove I placed the chassis in and filled it until the chassis was cover by about an inch of water. That’s a big pot. 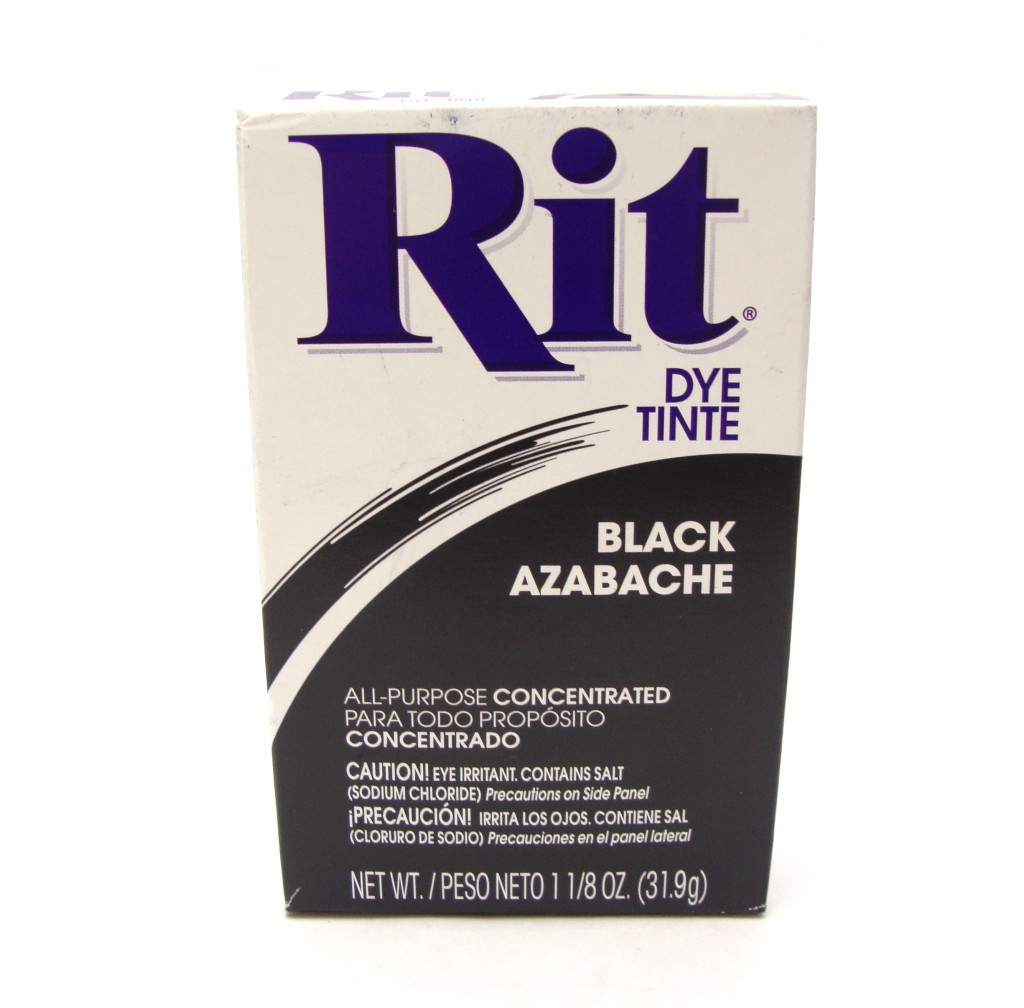 I used this entire box of Rit dye in the pot when dying the chassis. 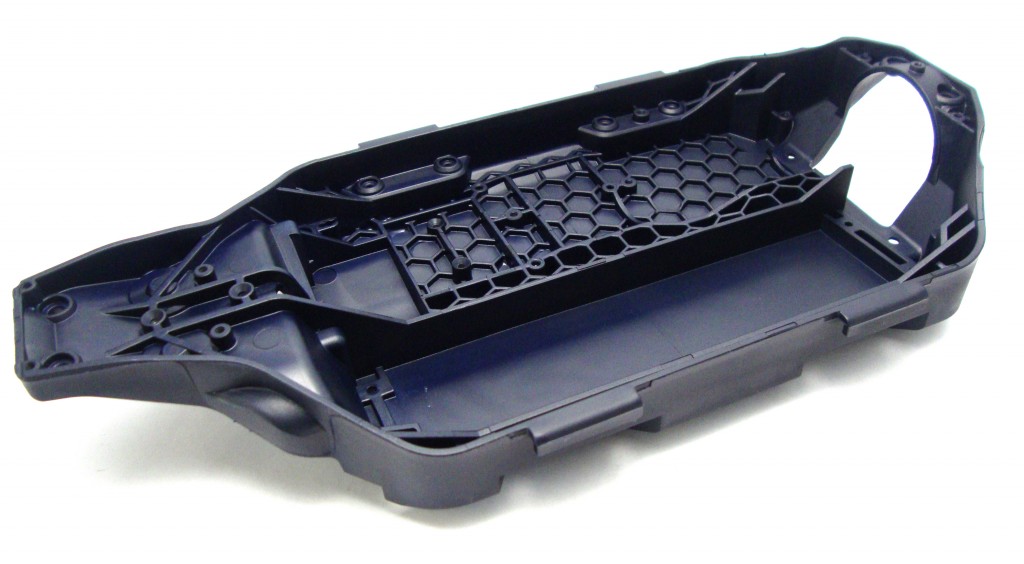 It doesn’t show well in the photo but that wasn’t the look that I had in mind for my chassis. I guess to get the color right I had to bring the water to a boil and that wasn’t possible due to the amount of water that was in the pot that I used. 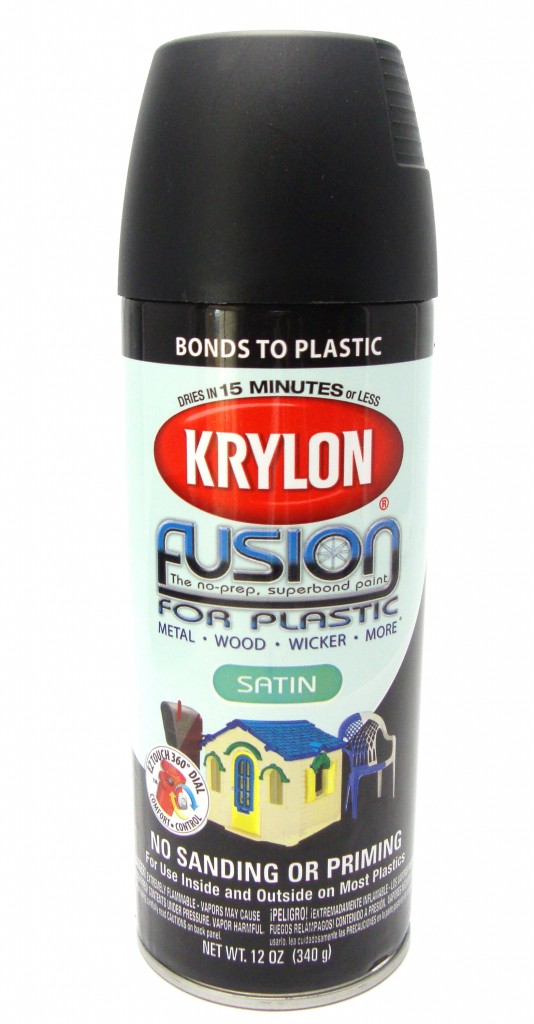 Right at the top it says blonds to plastic. That works for me. 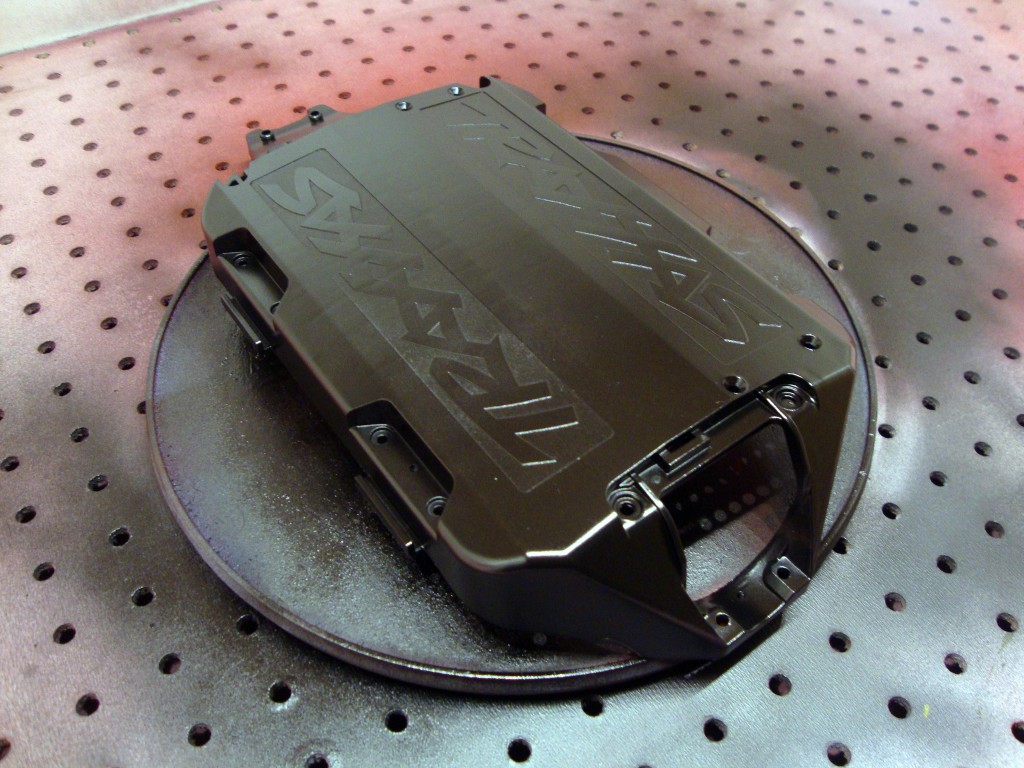 In the spray booth my chassis got a few coats of the satin black paint. Looking good so far. 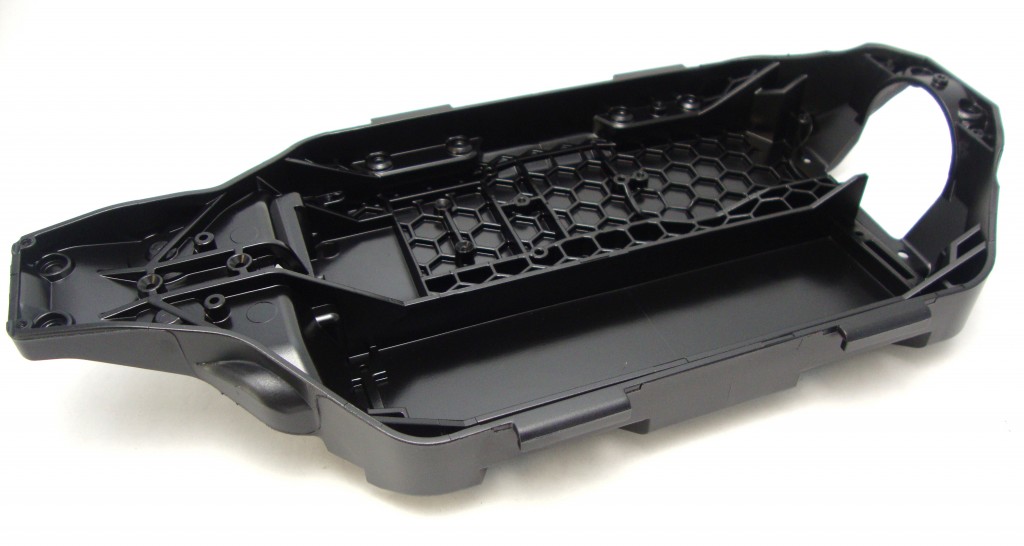 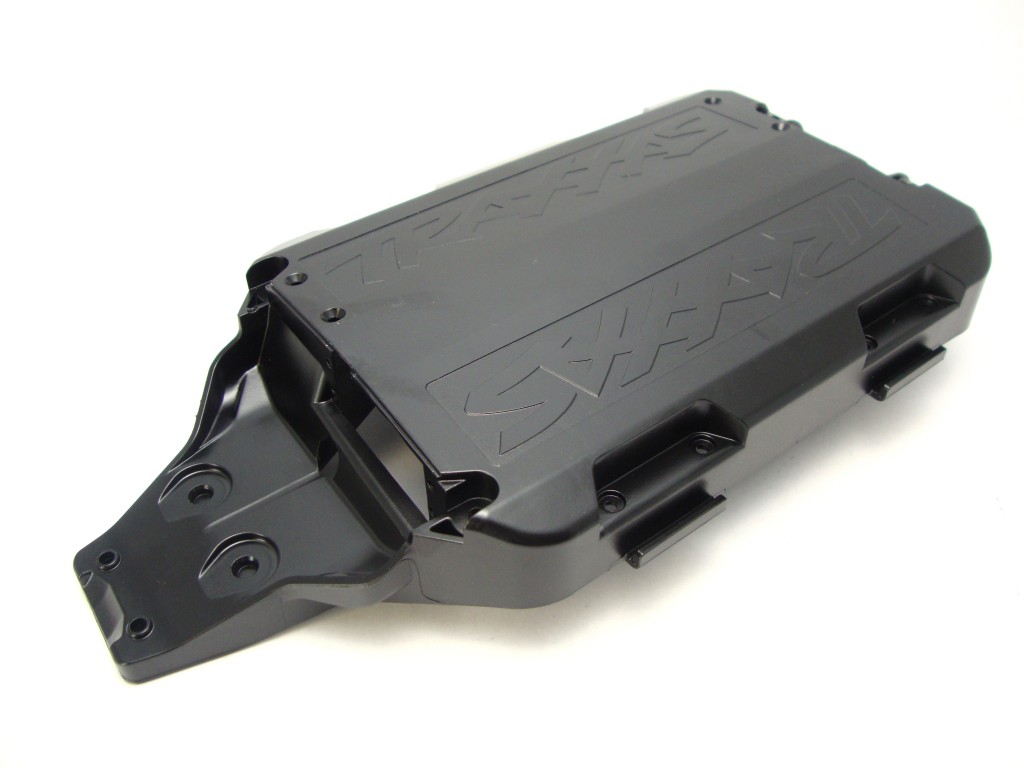 Here’s the finished chassis and it’s ready to go back onto my truck. I love how it came out, now let’s see how it holds up.