I have been lucky enough to build a lot of project vehicles during all the years that I have been involved in the RC hobby. 98% of those vehicles have been shown in the pages of RC Car Action Magazine and thanks to the Historical Archives (available by going to airagestore.com if you’re not a member) I’m able to take a look back from time to time to see some of those projects and get inspiration for new ones or remember the good times I had with them. For this Kev’s Bench I thought it would be cool to take a walk in the past and show you some of my favorite builds. 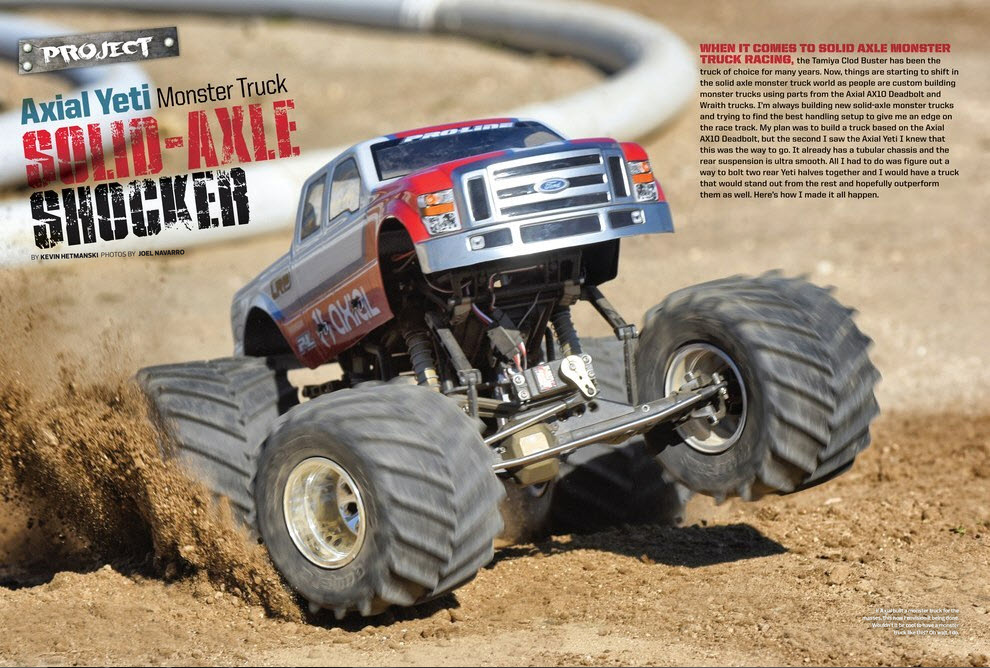 The second I saw the Axial Yeti Rock Racer I knew that the rear chassis and suspension would make a cool monster truck if I was able to bolt two of them together somehow. With a deadline quickly approaching I figured out that if I made a few custom carbon fiber plates and some spacers that I would be able to make it happen. On the dirt the truck made a great basher and was the best solid axle truck I had ever driven. I needed some dialing in however for the race track. I took the truck apart and came up with a new chassis design and a few other parts that would increase its performance, durability and adjustment. I’m almost done building version 2.0 and you’ll see it in the pages of the magazine soon. 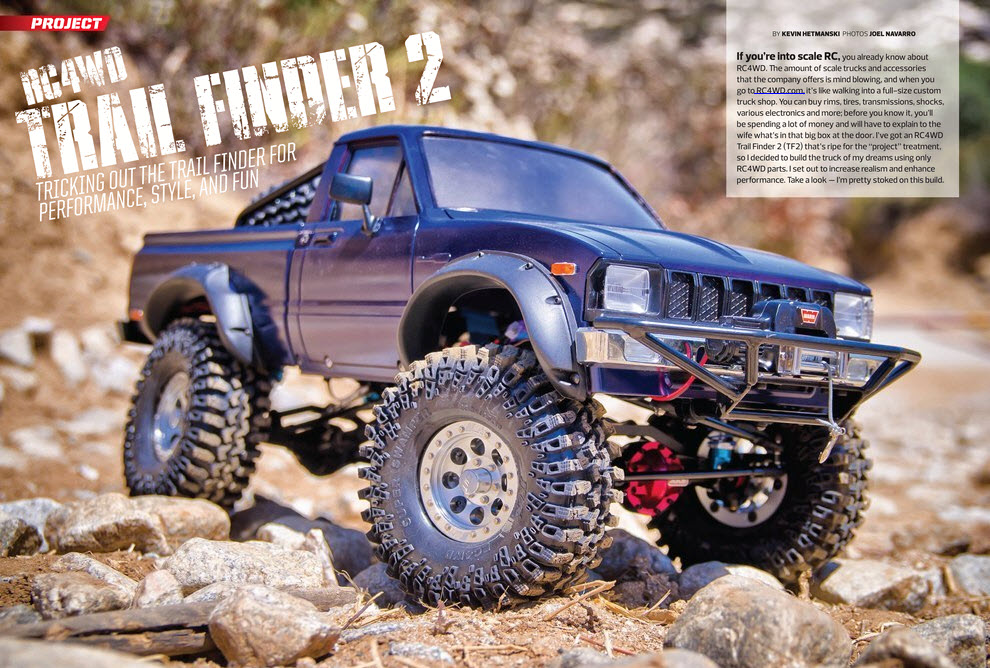 I’m really into building scale rigs and have always liked the trucks and accessories that are available from RC4WD. For this project I thought it would be cool to see what I can do with nothing but parts from RC4WD. Its one of the most realistic trucks that I have ever built and it’s pretty capable on the trails. 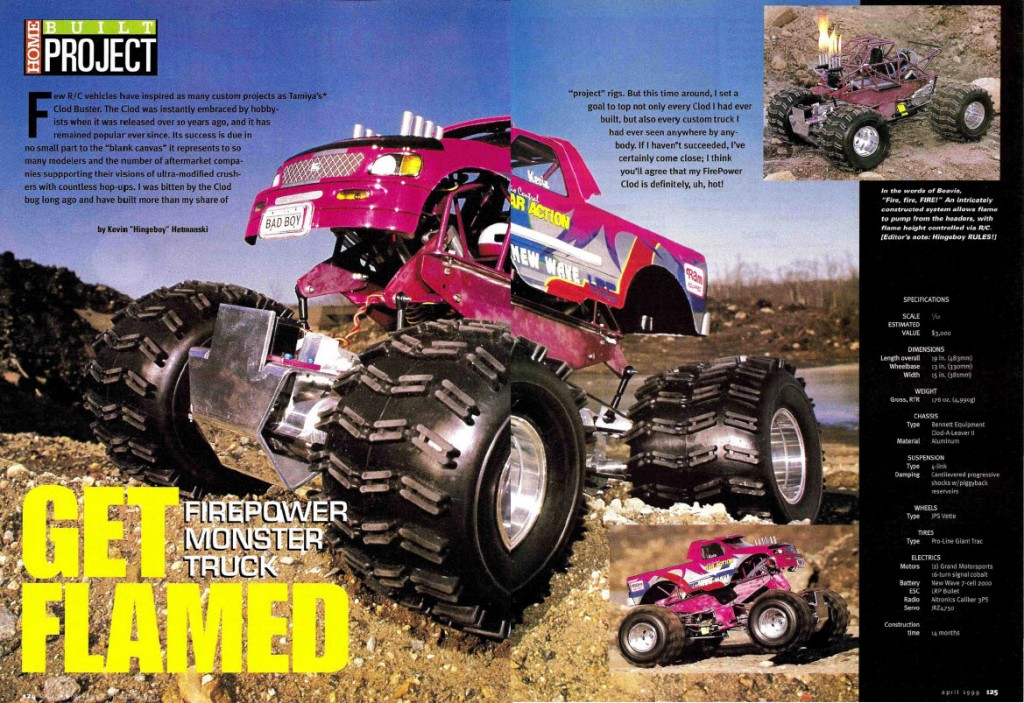 As a contributor I got a phone call from the editors of the magazine and was asked if I would be able to build a truck that shot flames. I accepted the challenge and after a few months of trial and error I was able to make it happen. Unfortunately we shot the photos in the winter when it was 12 degrees out and that reduced the pressure in the gas tank which resulted in a weak flame. Once the weather warmed up the flames easily reached two feet above the cab. 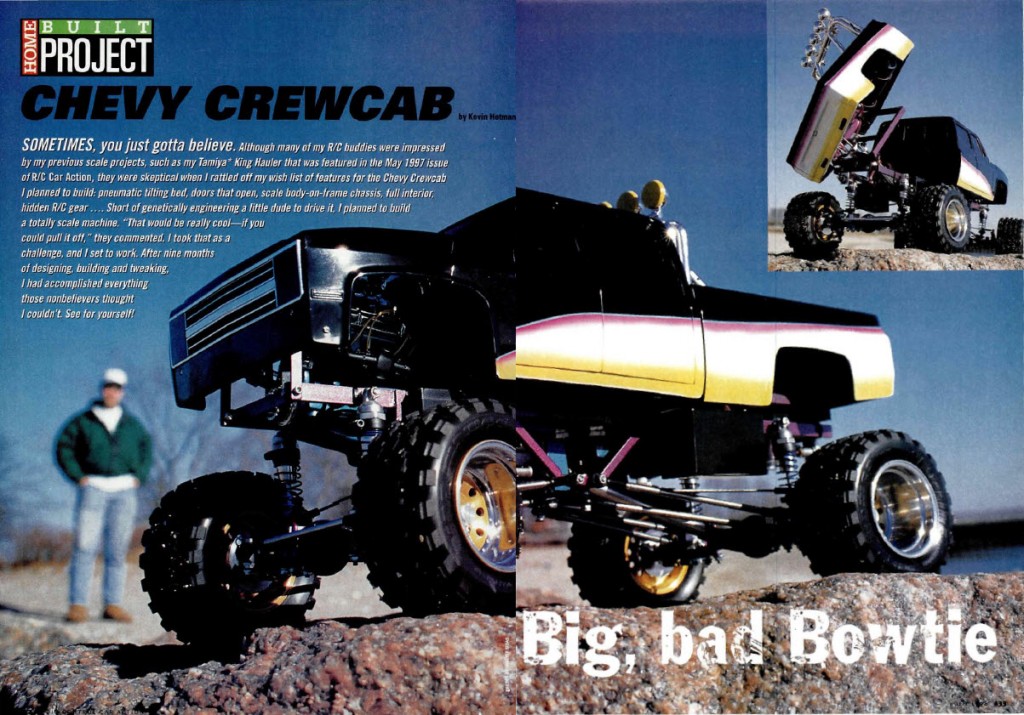 This is another project that was done before my full-time gig at the magazine. I remember starting this build and telling people at the hobby shop my plans to make it as scale as possible (which included hiding the motor in the scale engine) and they told me that it couldn’t be done. In the end the truck came out just like I was planning. It featured a custom brass chassis, custom transfer case, a 380 size motor, custom body and a lot more. My building skills weren’t as good as they are now and time took its toll on this truck; the paint was cracked, parts were falling off and so on. We were looking for a cool way to put an end to its shelf life and ended up using it as a victim to a flame throwing Traxxas E-Maxx. It made for some cool photos! 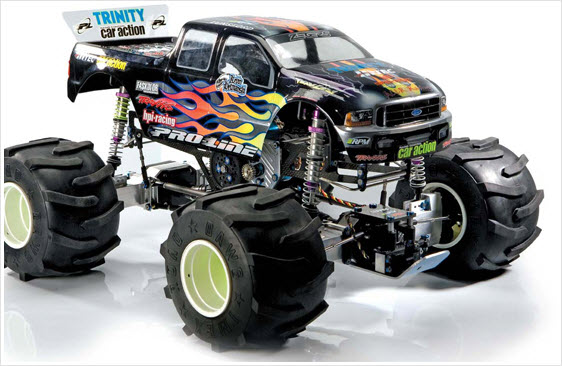 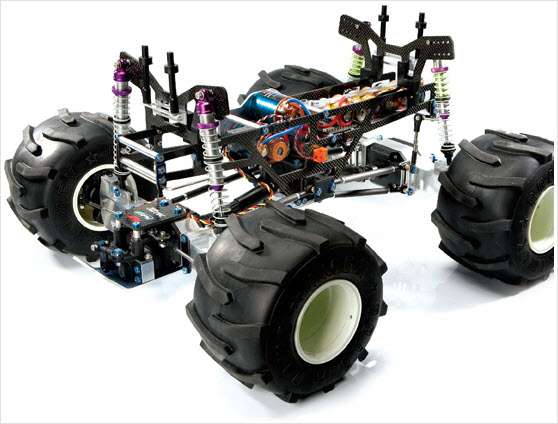 I had been building custom Tamiya Clod Busters for years and even got time with the TXT-1 (which I helped Tamiya design) and I knew that the trucks could be better. Since nothing that I was looking for was being released, I decided to take matters in my own hands and I build this one of a kind monster truck. I deigned all of the parts on a 2D CAD program and made a majority of the parts myself and once it was complete, it looked great and performed pretty well; so well that I managed to finish 3rd out of 72 trucks in its first outing. It’s been a while since I built and ran this truck and through the years have been messing around with a few other ideas. King of Crushers 2.0 is currently being designed and I hope to have it done soon. 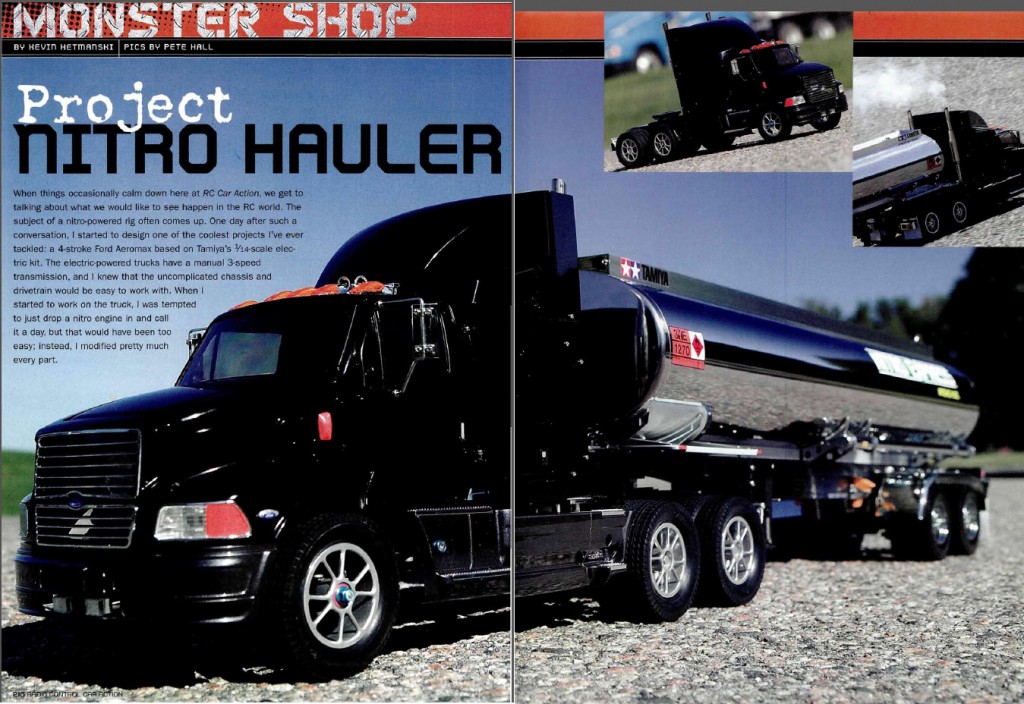 I have always love the Tamiya 18 wheelers and saw a few nitro powered trucks and to me that brought them to another level. I decided to build one of my own but didn’t go with the standard 2-stroke engine, instead a 4-stroke engine powered my rig. I also ramped it up by adding a 3-speed transmission, reverse, working stacks and aluminum wheels designed for a sedan. 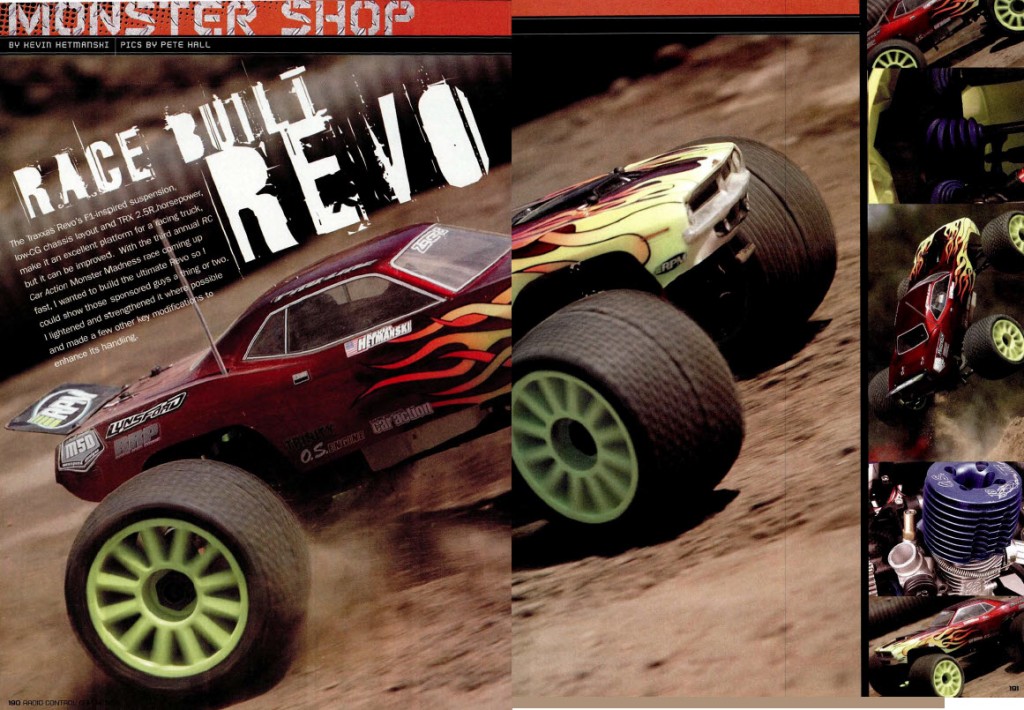 I have been racing for years and some of the most fun times that I has was behind the wheel of a monster truck. When the Revo was released, I knew that it was going to be my next race rig and I went to work. I added a bunch of option parts and made a few mods that made this truck tear up the track and handle well while doing so. How about that body! I didn’t want to go with a truck body like everyone else and changed things up with that sweet looking HPI Cuda.